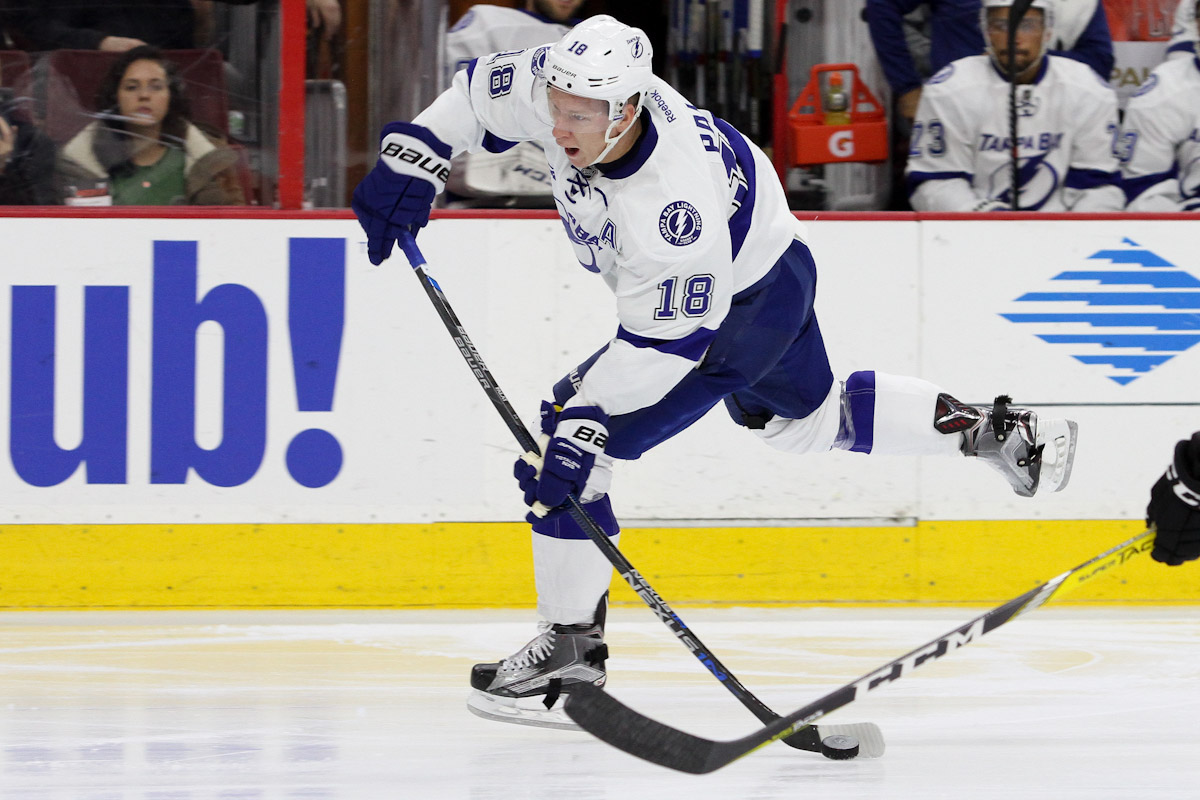 A year ago when Tampa spoiled their 128-point season with a first round sweep to the Blue Jackets, it was clear that the star-filled roster was missing something. That, being so powerful throughout the regular season and yet so unable to catch momentum in the playoffs, had to be the product of something. And while overconfidence was a popular narrative, so too was the more measurable indication of a team that simply didn’t find itself dealing with much adversity.

On Tuesday, the team got a nice taste of adversity and found a way to answer it throughout, evening the series at a game apiece and just as important, responding the way they couldn’t in last year’s playoff.

“Adversity strikes in the weirdest ways and you never know when it’s going to happen,” Lightning coach, Jon Cooper said. “Sometimes you’re just dealt a (blank) sandwich and it doesn’t taste very good. (Zach) Bogosian’s stick breaking (prior to the opening goal), the unfortunate incident of the first goal and how it went in and trying to go against a goal call by a ref. An offside going against us and even giving up the lead with four minutes left. If there was one message it was that we liked everything that was going on with the game. There was a recipe and you just had to stick with it. Some teams, if you have mental weakness at all you’re probably saying ‘poor us,’ but that’s just not been this group. That’s not how they operate. Anytime there’s a mishap, they just turn the other page and it was needed tonight.”

Bogosian’s broken stick helped Boston go the other way ahead of the defense, Nick Ritchie scoring 3:14 into the first as persistence met scrambling.  And though Tampa thought they had responded right away thanks to Barclay Goodrow, a close-call offside challenge from Bruce Cassidy returned the game’s 1-0 deficit. But the Lightning did manage to find a response before the end of the first 20:00 as a pair of deadline acquisitions showed some craftiness that’s more familiar among the team’s top-half of the lineup. Bogosian foudn Blake Coleman after a nifty set of moves to even the score.

A Bruins power play goal from Brad Marchand returned the Bruins lead, but again a Tampa answer wasn’t far behind. Brayden Point showed off some superior skating and puck control to spread the Black and Gold out and find a streaking-in Nikita Kucherov. Coleman’s second of the night 10:40 in the third gave the Lightning its first lead of the series. But when Tampa couldn’t clear the zone, it was Boston who felt the pressure to answer and did so with 3:58 to go in regulation–Marchand’s second of the game.

Ondrej Palat, without a goal this postseason, couldn’t get his first shot through, but stayed around Jaroslav Halak’s cage on the play and tapped in a wrap-around attempt turned rebound. For the third time this postseason, Tampa won a game in post-regulation to even the series and avoid a 2-0 deficit with the third game coming on Wednesday night.

Palat, the difference-maker in the extra frame reiterated the praise for managing emotions amidst a tough sequence of events in the first.

“It was huge, every time they scored, we responded,” he said. “We played real well. That third, we stopped skating a bit. Other than that, I thought we played well.”

Of course the most obvious difference from the Tampa of Tuesday and the one that ended their postseason in April last year, is the appearance in the second round. In no small part, it’s a product of Tampa addressing the balance of their club, which led to new faces including Pat Maroon and Kevin Shattenkirk last summer and at February’s trade deadline, it saw the acquisition of Bogosian and Coleman. The new-comer’s weren’t around the the franchise-best season last year and that’s not exactly a bad thing, according to Cooper.

We’ve grabbed a bunch of guys who that have got chips on heir shoulders,” he said. “Not necessarily those players were brought in to put points on the board, they were brought in to make us a better hockey team. And the fact that they’re contributing in these big moments, showing up on the stat sheet. It just goes to show the character they have within them. It’s not going to be (Kucherov) every night. It is most night’s but it’s not every night. To have some of these other guys chip in. You need that.

“None of those guys were in our room last year. They’ve jumped into our team this year and a culture we’ve built. They’ve come here to win and they don’t want to hear about last year or previous years. It’s a new a team, a new year. Everybody’s pulling in the right direction.”

Two of them, who partnered for an uncharacteristically aesthetically-pleasing goal in the first, were among the most recent arrivals to the club. Coleman, coming via trade; Bogosian, signed as a free agent after having his contract with Buffalo terminated.

A 2008 third overall pick, Bogosian’s played a solid defensive game throughout his career, but he showed off a bit of something else on Tuesday.

Wow, what a goal from Bogosian and Coleman to tie the game 1-1 #GoBolts pic.twitter.com/2TuOjjN2eA

“He just had that look in his eye that he was gonna do something,” Coleman said. “He made a heck of a play, it’s really on him.”

Coleman and company still have roughly a month if they are to use the recent prevalence over adversity as a rallying cry to a deep run, but the ex-Devil knows the danger and balance of the squad.

“I always hated playing against (Tampa),” he said. “It’s nice to be on this side of things. I think when you come into a team that’s so well-rounded it makes your job easier because you just get to play your game and you don’t have to do too much. There’s so many guys that can hurt you on this team. I think (Bogosian) would say the same thing, we’re just trying to do our job. We were all brought into this team for very specific reasons to help this team win and I think if we stay true to ourselves, we’ll be in good shape.”