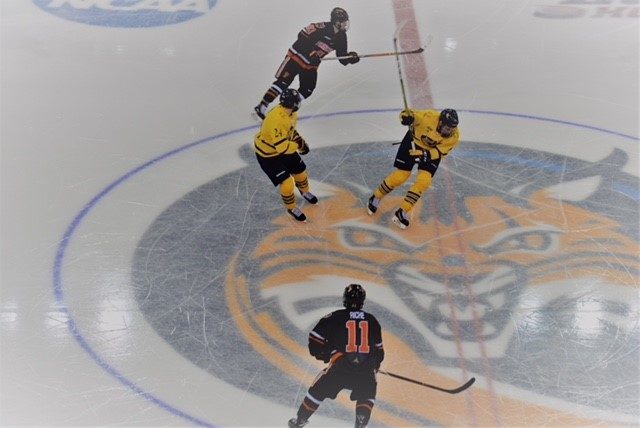 Hamden, CT — From 2012-2017, no team won more games in college hockey than the Quinnipiac University Bobcats. They made two trips to the Frozen Four and were regulars atop the ECAC.

This season, though, Rand Pecknold’s team has fallen on hard times. Inconsistent efforts, young goaltending, and questionable decisions have the Bobcats mired in mediocrity this season. No game symbolized that more than Tuesday night’s matchup with the Princeton Tigers.

The Bobcats returned home for the first time since December 9th to face a team they beat 6-2 earlier this season. Unfortunately, when Princeton arrived atop York Hill, they were ready and the Bobcats were not.

Princeton dominated the pace of play in the first period, peppering Quinnipiac’s freshman netminder, Keith Petruzzelli, with 20 shots in the opening frame. The Bobcats didn’t help themselves, as Brogan Rafferty committed a cross-checking penalty almost five minutes into the game.

On the ensuing power play, David Hallisey beat Petruzzelli from the right circle. Quinnipiac bounced back and matched the track meet pace. Right before the halfway point of the period, Nick Jermain tied the game with a one-timer off a smooth Tanner MacMaster feed.

The teams traded shots and two on ones for the rest of the period and entertained the fans on the corner of Whitney and Sherman. Just before the end of the period, Quinnipiac took the lead when Luke Shiplo beat Princeton’s freshman goalie, Ryan Ferland, with a backhander from the doorstep. Despite being outshot 20-12 in the frame, the Bobcats entered the intermission with a 2-1 lead.

The second period featured even skating and smooth two-on-one chances. Princeton had the better looks but Petruzzelli made 10 of his 34 saves in the frame. Quinnipiac only got nine shots on net but still tested Ferland. No pucks got through and the Bobcat defense finally broke in the last stretch of the period.

Tanner MacMaster was whistled for a tripping penalty. On the ensuing power play, Josh Teves drove from the blue line to the crease and beat Petruzzelli with a backhand to tie the game before intermission.

The third and final period started poorly for Quinnipiac. Chase Priskie committed the team’s third penalty of the game only 2:06 into the frame; a holding penalty. Nine seconds into the power play, David Hallisey potted his second of the night and gave the Tigers a 3-2 lead.

One minute and three seconds later, Princeton turned to their speed to put Quinnipiac away. Ryan Kuffner and Max Veronneau created a two on one rush and Kuffner beat Petruzzelli for a 4-2 Tiger lead. Quinnipiac mounted a comeback late in the period after Alex Riche took a slashing penalty and gave the Bobcats a power play.

Three seconds after the penalty expired, Alex Whelan tipped in a Craig Martin shot to cut the deficit to one. Pecknold pulled his goaltender and his team pushed for the equalizer. Unfortunately, they could not beat Ferland and Ryan Kuffner potted an empty net goal to secure a 5-3 victory for Princeton.

David Hallisey’s two-goal effort was his third such game of the year and seventh multi-point game of the season. Ryan Kuffner’s two-goal output was his second consecutive and fourth this season. Ferland made 27 of 30 possible saves and improved his record to an even .500.

The win bumps Princeton to 8-10-3 overall and 5-8-1 in the ECAC. They leapfrog Quinnipiac in the standings. The Tigers return home to New Jersey for a weekend facing St. Lawrence on Friday and Clarkson on Saturday. Puck drops at 7 pm for both games at Hobey Baker Memorial Rink.

Quinnipiac coach Rand Pecknold was upset after the game.

“I wouldn’t say it’s the most disappointing loss of my 24-year career but it’s up there. I’m embarrassed at how poorly coached we were tonight. Our buy-in wasn’t there. We took some selfish penalties tonight. It’s a good group of kids that want to do well, but that’s a poor effort on our part.”

Quinnipiac drops to 9-13-4 overall and 4-8-2 in ECAC play.  The Bobcats have to regroup before hosting the Golden Knights of Clarkson and the St. Lawrence Saints on Friday and Saturday respectively. Puck drops at 7 pm both nights at the TD Sports Center.