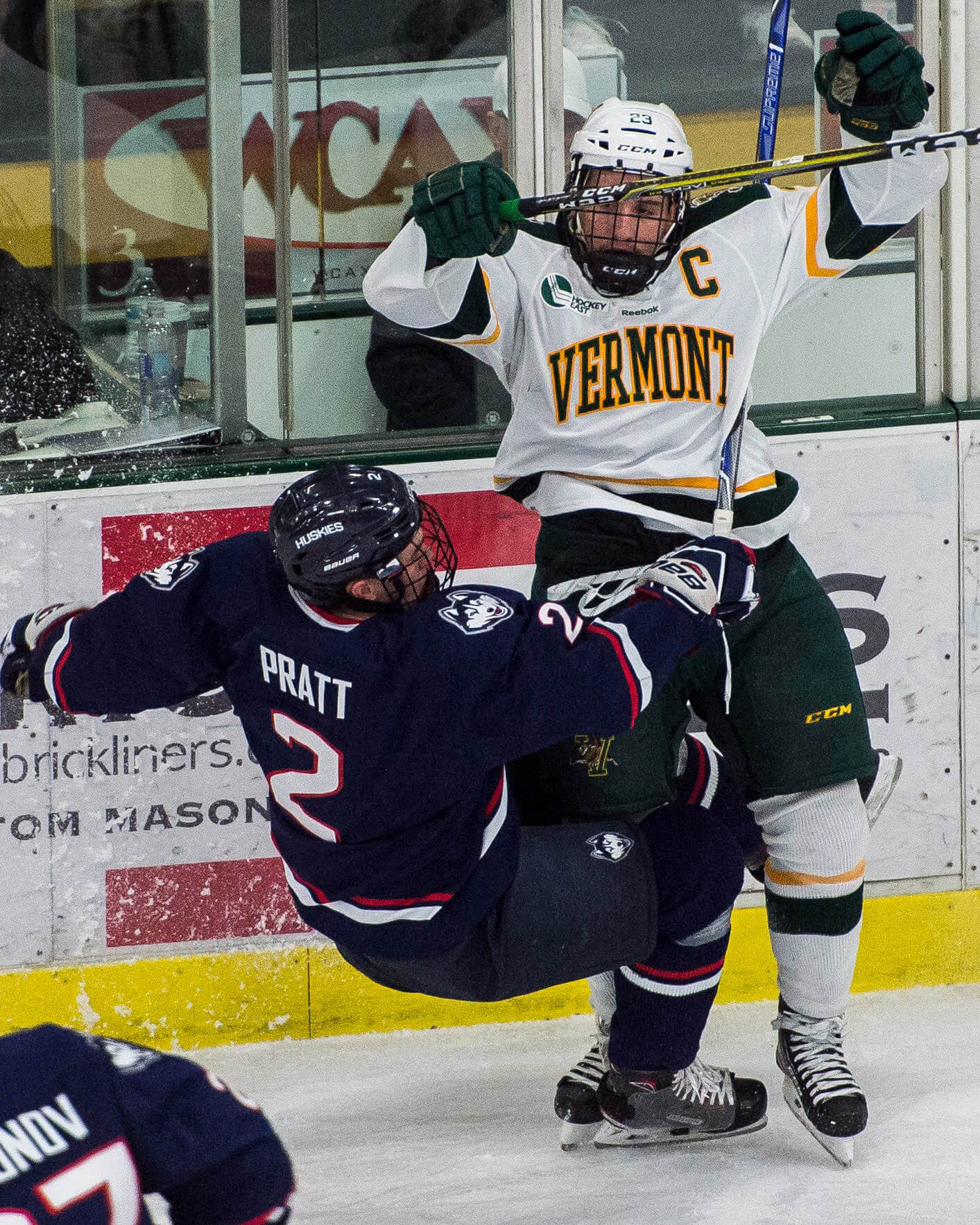 Connecticut has seen great college hockey in recent years. Quinnipiac has been a staple in the NCAA’s top rankings and UConn is making strides towards high tier competitiveness.

This year has seen the Bobcats struggle and the Huskies flash potential between cold runs. Both teams entered Tuesday night on a skid. UConn lost to Boston College 2-0 on December 30th and Quinnipiac went 0-3-1 in December. The Huskies hosted the Bobcats at the XL Center for the first game of 2018.

The Nutmeg State rivals continued the tradition of excellent Connecticut college hockey with a physical and entertaining game.

The hitting started almost immediately, with Corey Ronan taking a roughing penalty 24 seconds into the first period. The hits kept up and Quinnipiac broke the ice with the opening goal. Kevin Duane fired a shot from the left circle. Alex Whelan got in front of UConn netminder Adam Huska, controlled the puck on a rebound, and deposited the puck in the open net for a Bobcat lead 6:15 into the game.

UConn only mounted six shots in the period, but Shortbridge saved every shot. Things got interesting near the end of the period. With 1:05 left in the stanza, Logan Mick was called for hitting from behind. The Huskies created some chances but did not get a goal.

With one second left in the frame, the Bobcats were called for having too many men on the ice. UConn did not score in the second but would begin the third period with a 55 second five on three power play.

Despite the advantage, UConn’s offense did not get a shot on goal in the power play. The Huskies only got five shots on goal in the final stanza and missed the net an additional five times.

Meanwhile, Quinnipiac only took seven shots in the period but extended their lead. Early in the period, Chase Priskie kept a puck in the attacking zone at the blue line. The Bobcat captain fired it towards UConn’s net. Scott Davidson tipped the puck on net and Huska saved it. The puck bounced to the left circle where Bo Pieper fired a one-timer past Huska for a 2-0 lead.

UConn surged after the goal. They tested the Quinnipiac defensemen but could not get pressure on Shortbridge. The Huskies missed opportunities to get on the scoreboard.

One particularly notable opportunity was lost when Maxim Letunov skated the puck behind the Quinnipiac net. He was tripped up but did not draw a penalty. The fans at the XL Center booed the officials for the miss, but the Huskies did not help their cause.

With under two minutes left, Huska went to the bench for an extra skater. Kevin McKernan fired a puck from his own blue line into the empty net to close the scoring.

Quinnipiac opened their second half with a 3-0 victory over their in-state rivals. Sophomore goalie Andrew Shortridge recorded a 21 save shutout for his fourth shutout of the season and fifth of his career.

“It was huge for us to get that. The guys in front of me were awesome and I’m excited for what we’re gonna do the rest of this season.” Head Coach Rand Pecknold echoed his goalie’s sentiment while praising Shortridge.

“Good goalies make good coaches and he made me look good tonight. We’re not used to struggling the way we have, but we’re fighting through and making things happen.”

Quinnipiac runs their record to 7-10-2. The Bobcats play the second and third of seven road January games this weekend against Colgate. Puck drops in Hamilton’s Class of 1965 Arena at 7 pm on Friday night and 4 pm on Saturday afternoon.

UConn has started their second half with two consecutive zeros on the scoreboard. The Huskies totaled 23 and 21 shots in each of their first two games.

Head Coach Mike Cavanaugh was positive after the game, but concerned.

“It’s not time to push the panic button, but our offense has to get going. I was proud of how we got our defense and goaltending played and we’ve got things to build on.”

UConn’s record falls to 8-13-2. The Huskies continue their Hockey East Schedule with a Friday night game against the Merrimack College Warriors. Puck drops at the XL Center on the 5th at 7:05 PM.