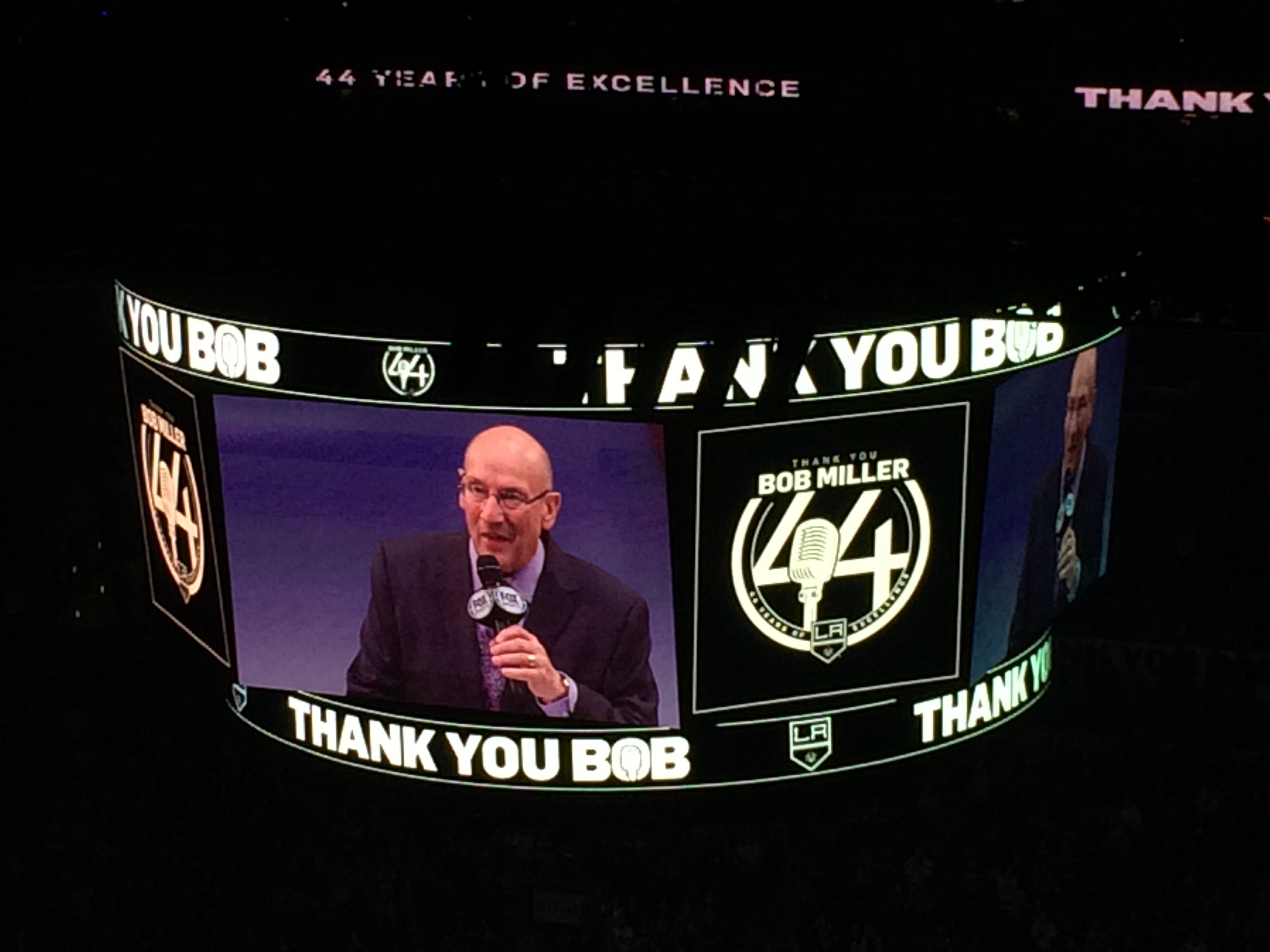 The Ducks battled the Kings Saturday night in a not-unimportant game. Anaheim was coming off a loss to Calgary, and the Kings had lost two straight—to Calgary and the Predators. The Ducks had gained points in four of five games, including three wins. The Kings had earned points in three of five, with one OT. Each team has dealt with injury, but the Kings far less so than Anaheim, who have lost just about every one of their top players as the season’s first half has gone on. (The total of player games is 237, to LA’s 112).

The Ducks were mired in sixth in the West’s wildcard race. They had, at least, allowed some other teams to catch up with them in games played, as they, and the Kings, had just come off their five-day break. The Ducks for the longest time have been a game or three ahead of their near neighbors in the standings. Still, to be behind Colorado had to be at least some motivation.

The Kings were in second behind everybody’s new favorite, the Vegas team. They hadn’t yet given up 100 goals. The only team close? Boston. The Kings had surrendered 99, Boston 102. The closest in the West—Nashville at 114 and Vegas at 113. Closest team that didn’t factor into the playoffs at the time? San Jose with 106 against.

None of that mattered as much as Bob. You know, Bob Miller. The voice of the Kings for 44 years. Those of you reading from the East of Canada and the US might be more inclined to understand this than some others, because you know about loving a broadcaster. Foster Hewitt. Danny Gallivan. Dick Irvan. These brought the game to the fans in ways that constructed fans’ lives.

The Kings, too, have enjoyed having one man who brought the game to two generations of fans. One man who finally, after 40 years, got to call his team the champions of the NHL. One man who taught a place where hockey was nothing more than an afterthought how to love the game that they have made theirs.

One man who is loved by a city and a community of hockey fans for what he did game by game over all those seasons but who also never failed to spare a minute to talk to whoever approached him.

Personal note here—Bob Miller got me my Gretzky book deal (Facing Wayne Gretzky), and he didn’t ask anything in return. Except that I sign his book when I gave it to him. Me, for him. What a moment.

When, after all those years, he and Jim Fox called the 2012 Finals (live to tape due to contractual commitments of the Final series to the NHL, much to the chagrin of fans both in LA and elsewhere), and the Kings won, Bob said the following:

“This is for you Kings fans, no matter where you may be.”

He might well have said the same thing Saturday night at Staples Center, because in his modesty, he made the unveiling of his statue and the raising of his banner more about everyone else than he did about himself. That’s Bob Miller. He’s the star, but he never plays it that way.

After I wrote the above, the first period of the LA game ended, and downstairs the reporters went to interview Mr. Miller. He nodded to various ones, and as he cut through the small crowd, he looked at me, said, “Hi Brian,” and shook my hand. If I didn’t tell you that, I would fail to represent Mr. Miller for who he is. Even on this night, he was more about pipsqueak me than about giant him.

Zooming back to the pregame: The team had unveiled a statue outside around 6:45pm in advance of the post-7:30pm starting time. Inside Staples Center around 7:30pm, they presented Miller with an expensive (and handsome) watch. His wife Judy, called by Jim Fox “the first lady of Kings hockey,” got some diamond earrings. They both received a cruise for their family, to Alaska. Bob made a speech thanking people.

They then raised a banner to go with those of retired players and all-but-one Hall of Famers Vachon, Dionne, Taylor, Gretzky, Robitaille, and Blake. All but Gretzky and Taylor were in attendance. So were a couple of old-times Kings’ broadcasters, Jiggs McDonald and Pete Weber (currently with Nashville and the only voice ever for that franchise).

And then there was some hockey. And some fighting. Three fights in the space of four played seconds. The first two were revenge bouts. The third, I have no read on. None were related to particular plays on the ice, as might be surmised if you know that they took place between 2:29 and 2:33 of period one.

Next time they call this Kings-Diucks thing a “real rivalry,” you ought to listen.

The game proceeded with the Ducks getting a soft goal on their first shot. It was fired from low on the right side of the ice and somehow went through Jonathan Quick. The rest of period one wasn’t remarkable for any reason. Except the Ducks’ second goal, which came from the point to the right circle and was tossed in over the head of Quick. Another uncharacteristic goal allowed by Quick.

The second period saw the Kings get one early, disallowed because it was clearly batted in with a hand. The two teams then settled down to a rather tame contest. Cogliano took an early interference penalty which cost Kempe a bump on the nose. The fault did appear to be Cogliano’s, but it was almost equally two players just seeking the same ice and ending up colliding.

The Kings ended up with eight shots on the period to total 15. The Ducks registered seven to end up with 12. The crowd was so quiet that at one point, a guy in the top tier started yelling “Go Kings Go” and seemed like he was all alone. And the arena was full. Full, full. Not sellout full (which happens every single night for this team now). Absolutely every seat had a butt in it.

That’s also down to Bob Miller, and certainly should be read as a sign of respect for him.

The third period opened with yet another bad goal favoring the Ducks. Nick Ritchie went behind the net to where Quick was bobbling the puck. Ritchie grabbed it, backhanded it out to the slot, and watched while his teammate Kase scored his second of the game on a one-timer from the slot. Quick was falling to the ice as the puck went past him.

The Kings got one back to break the shutout near the midway point of the third. Nick Shore battled hard behind the net and hung tough out front of it as the puck went from the left side of the ice to the right, and finally a pass came to him just off the edge of the crease. He got off a quick shot, partially squibbed. It hit the arm of Gibson and bounced straight in.

LA made it 3-2 with about six minutes remaining. Iafallo played tough behind the Ducks’ net and eventually came out with the puck to the front for Forbort. He took a shot that was saved. The rebound went straight to Kopitar, who put it home high.

The Kings pulled Quick with two minutes remaining. Corey Perry scored from his own hashmarks with 1:28 to go, a turnaround slapshot that went all the way down the ice. Selfish play, actually, since it would have gone for icing had it not hit the net.

After the game, the LA coach, John Stevens, pointed to some passengers on his crew. “We need everybody. Quite honestly, you can’t have gaps in your lineup. You can’t have two lines going or three lines going, or four defensemen. We need everybody.” He said that the people who were being pointed out were those who are not wearing letters on their chests but who are established players in the league. He wouldn’t name names.

“I think our leadership has been very strong this year,” he said of his main guys. “There’s a secondary leadership group there that has to be more consistent. I think the top guys have really been very good for us. . . . We just need some of our younger generation guys to take a little more bit in games like tonight.”

You know what? Maybe it’s good that this wasn’t a sterling performance by the Kings. That way, nobody will remember the game.

The Kings now host San Jose on Monday at 1pm. For you Canadians, that’s an odd time, but related to the fact that they day is the Martin Luther King, Jr. holiday.

The Ducks head to Colorado for one game and then return home for the Pens, followed by Los Angeles. This rivalry renews Thursday night.

My eighth book is out. It’s called Mixing Memory and Desire: Why Literature Can’t Forget the Great War. So it’s not about hockey. But if you’re interested in the topic or have connections to a library, please give it consideration.