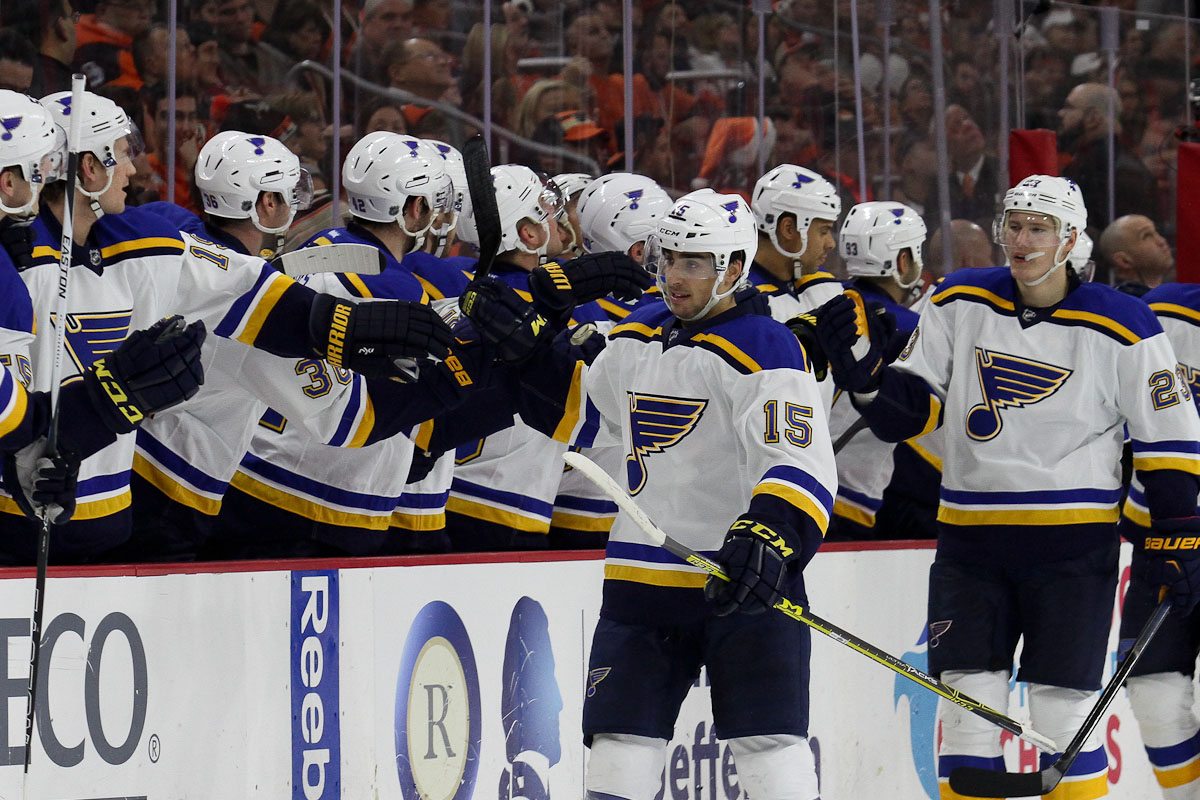 The San Jose Sharks had their four-game home winning streak snapped by the St. Louis Blues 1-0. Brian Elliott made 37 saves to earn the shutout while Robby Fabbri scored the game’s only goal midway through the third period. The Sharks could have clinched a playoff berth with a victory but that celebration will have to wait.

The game featured an excellent goaltending matchup, as Martin Jones was in net for the Sharks against the red-hot Elliott who had won his previous six decisions entering this game.

The contest was scoreless after 20 minutes of play, but the Sharks outshot the Blues 10-6. San Jose went on their first power play of the night after Joel Edmundson slashed Joe Thornton with 1:32 left in the first period. However, the home team was unable to take advantage of the late power play.

Edmundson committed another penalty when he was called for elbowing Melker Karlsson at 10:48 of the second period. Then, Dainius Zubrus was charged for high-sticking Dmitrij Jaskin at 15:35. The Sharks outshot the Blues 22-15 after 40 minutes of play. However, neither team was able to benefit from their power play advantages.

Through 40 minutes, both teams played strong defense and both teams were able to keep the opposition off the scoreboard.

The Blues finally opened the scoring at 9:55 of the third period, as Robby Fabbri scored his 17th goal of the season. Troy Brouwer (16) and Jay Bouwmeester (16) picked up the assists, and St. Louis took a 1-0 lead.

The Sharks made a desperation push to tie the game in the closing minutes and had several quality chances. Tomas Hertl’s wrist shot was stopped by Elliott with less than two minutes remaining in regulation. The Sharks had a late 5-on-3 power play but were unable to get the equalizer and fell 1-0 despite outshooting the Blues 37-24.

One goal was all it took for the Blues to defeat the Sharks 1-0 at SAP Center. With the shutout victory, St. Louis extended their winning streak to two games and snapped San Jose’s two-game winning streak.

Sharks center Logan Couture said, “I thought we did a pretty good job. It was a tight-checked game. One shot made a difference in the game, but overall, we did a great job as a group. . .You want to play a different type of hockey, but you never know what is going to happen.”

Sharks head coach Peter DeBoer said, “Most of our games, we could have done a better job as a team. We could have helped our goalie a little bit. Better faceoffs. Too many of our shots were saved. Other than that, it was a good hockey game.” When asked about the second period, DeBoer responded “It was probably our best period. I thought we took control of the game. We put up a lot of shots. The Blues deserved the credit though.”

Up Next: Sharks host the Edmonton Oilers Thursday night at 7:30 pm PT on CSCA, RSEO.