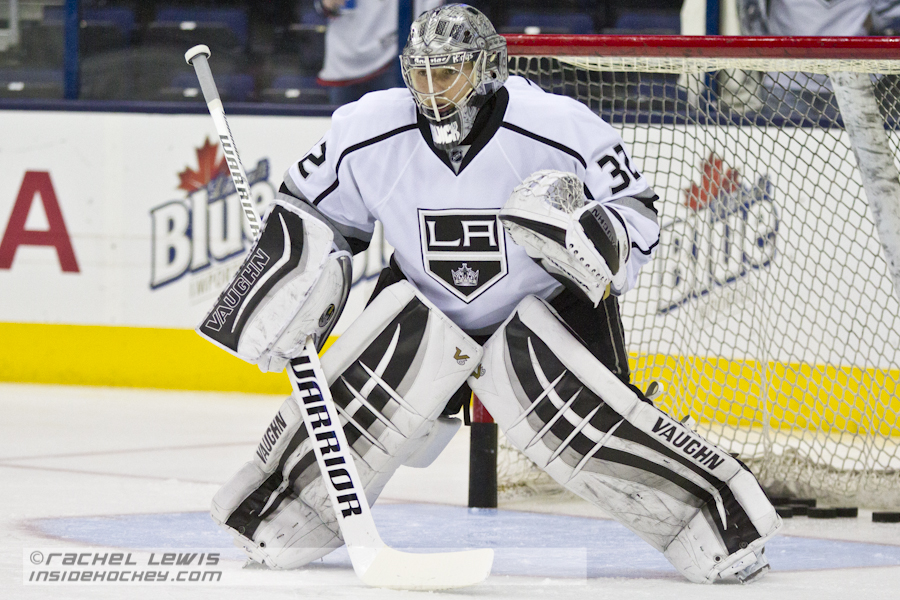 Blame the Division, Not the Addition

When your playoff hopes are hanging by a thread, you’ll try anything. That’s perhaps why Darryl Sutter called a coach’s challenge on Arizona’s first goal Sunday night. Desperation turned to actuality, though, when it appeared (to the linesmen) that the puck had bounded in and out of the zone while a player on the opposite end of the blueline did the same—but not at the right time to avoid the call. Goal gone, and it was still 0-0.

But Arizona turned that back around 30 seconds later, still on the power play, when Ekman-Larsson passed to Burmistrov, who took a shot from the crease. Quick saved it with a beautiful splits, then couldn’t fight off the rebound, which bounced up and over the outstretched leg.

It was not his first beautiful save of the night. Earlier in the first period, Vrbata had taken a snap shot from the deep slot with the Kings running around in their zone. It hit something in traffic. The puck went to Peter Holland on the right side, with the whole side of the net open. He shot. Quick got one leg over—somehow—and made a highlight stop. Beautiful and athletic.

He would stretch for another and not get it early in period two, when Max Domi put a puck into the slot for Anthony Duclair. That player shot it, hit a close-by leg, and then shot again. Quick was all stretched out and got a bit of glove on it, but no more. It was 2-0 Arizona.

The Kings shortly had a two-on-one rush of their own, Doughty doing the legwork and Lewis with him. The defenseman put the puck over to the front of the net. But it skirted by without Lewis getting a touch on it. Shots by this point were 12-12 after LA had opened up a lead of six in the opening minutes.

And the Coyotes were largely controlling play, their strategy to gobble up every loose puck and play a tight-in passing game. This after the early going was scrambly and full of rushes, mostly by the home team.

But we were talking about desperation, weren’t we? How about this: lines were all mixed up at the start of this game, with Kopitar and Gaborik with Toffoli; and Pearson and Carter with Iginla. Fair enough. Then there was Brown, Lewis, and Shore. Typical third-line stuff. But on the fourth line? Early, it was Kempe with Nolan and Clifford. Kempe mustn’t have been happy with that. But how do you think Kopitar felt when he was the center for the other-named two? No mistake—this was right after a power play, too, so you know Kopitar had been on the ice in the two minutes prior.

The surprises stopped in period two, with the lines Sutter started with being the ones he went with. Of the four, the Kempe group was barely seen, but the Brown-Lewis-Shore line was the best of the Kings. They had two particularly strong shifts in the second ten minutes of the period, with the second one being a model of puck possession. Even when it seemed to have been turned over, they got it back inside the blueline. No goals resulted, unfortunately.

The Kings did stretch out their shots advantage as the frame went on, however, with it standing at 17-13, growing to 20-13, and ending the period after a late power play at 25-13.

Problem was, no goals, and this recap of the power play will detail why: Kopitar soft wrister into traffic. Muzzin to Carter, quick shot and save. Muzzin slapper, hits Iginla in the back. Kempe shot wide after a whole bunch of passing the puck around by the second, or perhaps the third, power play unit. This is so typical of this team–close, but never scoring.

Shore and Doughty did get something going with about 20 seconds left in the period off a scramble of bodies in front of the Arizona bench. Shore came up with it, rushed down and passed to the Dman, then watched as Smith whipped a glove hand up high to snatch the puck from mid-air as it went toward the open cage.

And the Kings had two more pokes at the puck close to the net off the faceoff which took place with 18.6 seconds left. They got one SOG out of that. Then one final try with a couple of seconds left and a faceoff. Still nothing.

The playoffs hung in the balance of the third period, which the Kings would have to win 3-0 to make it, to cite their coach, a 3-2 league. Otherwise, the season would be over with four games to go—Tuesday, Thursday, and Saturday at home, and Sunday in Anaheim.

So period three began with an early power play, and Toffoli took the puck across the crease, but missed the net with his shot. That was the extent of the action until one of the luckiest goals of the year was scored.

Nothing was happening with the man advantage, but then the Kings had one last chance to dump it in. Martinez had taken the puck from his blueline to center ice. He slapped it in, a dump, and clear. A nothing puck.

Whaaa? Well, sometimes you just gotta shoot the puck. He slapped it; it looked like it was going well wide; somehow it hit Jordan Martinook, then went between the legs of Luck Schenn; along the way, it turned into a curveball.

Smith was out of the net to his right, Martinez’s left, to grab the dump-in. It suddenly was heading to the center of the cage. He dove back, too late. 2-1.

The Kings got another chance when Connor Murphy took a tripping penalty in his own zone with about seven and a half minutes left. The Kings got a further break when the Coyotes dumped a puck over the glass with 5:44 left in the game. On neither did they score. They are thus done for the year. The remaining games will have only the interest of seeing youngsters play and perhaps influencing where other teams finish.

The shots were 35-15 for the Kings. That’s a problem that I’ve discussed before. On most nights, this team outshoots their opponent. But they just don’t put the puck in the net. With their paltry goal this evening, they have 188. This puts them behind all but Vancouver and Colorado in the West. Even the Coyotes have two more.

And that brings us to the problem. When asked whether goal scoring was the trouble, Coach Sutter afterwards had another answer: “I think there’s lots more [than not scoring].” He said he wants to play the division games this week, one assumes so that the Kings can have an impact. “One thing I took out of this season is we haven’t kept up with our Division. From a lot of different areas. More of that, we’ll review.”

“It’s tough chasing the lead,” he said. “We got caught back door on that goal there, and second period, I think we totally outplayed, but the one chance they had, they scored. We had a lot of chances and couldn’t score.”

He continued: “A lot of that X and O, data stuff, we’re really good at, but I just think it’s the Division, holding us back and . . .” he tapped the podium twice, and we thanked him and left the room.

So it’s not the addition (of goals). It’s the Division. It’s their fault. Its fault. Whatever. It’s how the Kings played in the Pacific. Is that really it? Here are a couple of other opinions.

Being gracious after playing his heart out and losing, goalie Quick took the blame on himself. “We gave up too many. We didn’t score enough. That’s how we lose.” He said he was back long enough to help the team win. “I’ve been here for the past two months, so, I honestly wasn’t able to get it done on my end, so . . . .”

Across the room, Kopitar looked absolutely despondent. “Coming back from the breaks, we weren’t as sharp as we needed to be,” he said. “A lot of guys I think, me being on top of that list, I don’t think the production was there the way we expect from ourselves. You can go on and on right now. It’s a very empty feeling.” So it is goal scoring. Simple as that.

“You can’t expect to win too many games scoring one goal, especially at home. There was definitely too many of them this season.”

So that’s it. It’s not the Division at all. But whatever. The mantra for the past few years, “All you’ve got to do is make the playoffs,” is off.

But there is something to look forward to: Mr. Bob Miller, the great Kings broadcaster, is calling his final two games next weekend. Look for news about events before Saturday’s home game at Staples Center.