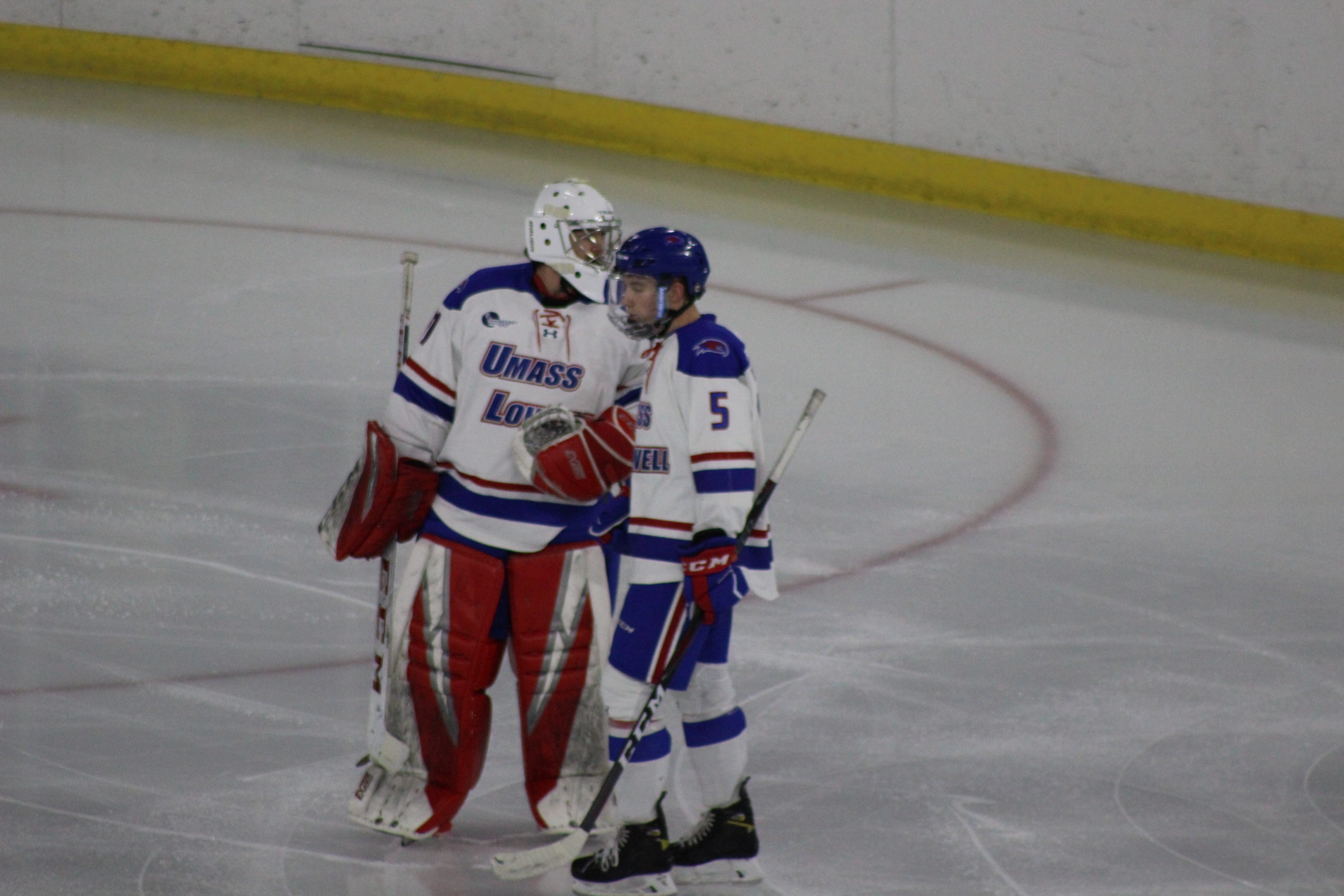 Lowell, MA — Scoring was not an issue in this game as the Maine Black Bears and UMass-Lowell River Hawks combined for 14 goals. Junior defenseman Chase Blackmun led the charge for the River Hawks with three goals while senior Eduard Tralmaks notched two for Maine. UML’s Lucas Condotta led all scorers with four points, 1 goal, and 3 assists.

Both starting goaltenders were chased out of this affair. UML’s Logan Neaton lasted twenty minutes, giving up three goals on 17 shots. Two goals came courtesy of a 5 Minute Major penalty to freshman defenseman Ben Meehan for Contact to the Head at 12:13. Neaton’s counterpart Victor Ostman, a freshman from Sweden, departed the game at 2:48 of the second period. Ostman gave up four goals on 17 shots. The game was the first start for both goalies this season and Ostman’s first NCAA appearance.

Neaton was relieved by junior Owen Savory who has been with the River Hawks for the last few weeks since transferring from RPI. Savory had 11 saves on 13 shots in 40 minutes of action to earn the win for his new team.

Ostman was spelled by Matthew Thiessen, who suffered the loss, after surrendering five goals on 41 shots.

The game was a back and forth tussle that featured six lead changes throughout the first two periods. Each team would hold the lead twice before UML pulled away for good at 9:07 of the second when Carl Berglund banged home a loose puck in front of Thiessen.

Blackmun got things rolling for the River Hawks at 7:47 of the first when he wristed a shot past Ostman from between the circles. Matt Brown and Charlie Levesque got the assists.

With Meehan in the locker room and Matt Allen serving the penalty, the visiting Black Bears jumped out to a 2-1 lead at 15:10 when Tralmaks gathered a loose puck at the side of the Lowell net and lifted it past Neaton. Ben Poisson and Adam Dawe were credited with the helpers.

Less than a minute later, Westerlund gave Maine their last lead of the day at 16:42 when he deflected a Jacob Schmidt-Svejstrup wrist shot from the point past Ostman. The power-play goal was Westerlund’s third goal of the season.

Blackmun’s second goal of the game tied it at 3-3 when he fired a wrist shot from the top of the left circle past Ostman at 17:44. Berglund and Allen assisted.

Blackmun opened the scoring again in the second when he one-timed a slapshot from the blueline past Ostman and ending the freshman’s afternoon at 2:48. Levesque and Condotta contributed to the hat-trick goal.

Maine’s Lynden Breen was called for Holding at 5:24. This set the scene for Tralmaks second of the game, a shorthanded goal, on a three on one rush with Sirota and Dawe.

As was the case all game, the lead wasn’t safe and at 9:07 Berglund struck to make it 5-4 River Hawks. The goal was Berglund’s second in two games against Maine.

Sophomore Brian Chambers made it 6-4 UML at 17:51. The forward fired a Condotta pass past Thiessen for the eventual game-winner. The goal was Chambers’ first career NCAA goal.

At 5:34 of the third, sophomore defenseman Levi Kleiboer put Maine back down by a goal when he wristed a shot from the blueline past Savory. Tralmaks and Adrien Bisson assisted on Kleiboer’s first of the year.

Brown, Nik Armstrong-Kingkade, and Condotta all scored in the latter half of the period to pull away for the 9-5 River Hawks win. UML improved to 3-1-0 while Maine fell to 0-3-1 on the young season.

“We weren’t pleased with ourselves the way we handled our emotions,” said Maine coach Red Gendron after the game. “There was an awful lot of back-biting on the bench. We simply didn’t do a good job of doing our own jobs and supporting each other.”

“It’s good to be done,” said River Hawks coach Norm Bazin. “I thought it was an odd hockey game. I thought there was a lot of momentum shifts. And it seemed like the last team to score was going to win. It was really odd.”

“We didn’t get too down on ourselves,” continued Bazin. “It was just one of those games that you enjoy during Christmas break when it’s just the guys playing each other but when you’re in the real setting you don’t expect a parade of goals to go in both ways. You stick with it and shoot as many pucks as you can.”

Should things go according to plan, Maine will travel to Gutterson Field House for two games against the Vermont Catamounts on Friday and Saturday. Both games have 2:00 pm puck drops.

UMass-Lowell has a home and home scheduled this Friday and Saturday against rival Merrimack College. The Warriors will host on Friday, with puck drop at Lawlor Arena to be determined. The River Hawks return the hospitality on Saturday at 6:00 pm at Tsongas Center.