In over 10 seasons with the Blackhawks, Joel Quenneville created the gold standard across the National Hockey League–a blue print of success. Winning three cups in six years in the salary cap era, the bench boss was a crucial element, a much-revered coach.

But coaches almost always have a shelf life and Tuesday’s was the end of Quenneville. The club dismissed the long-tenured head coach along with assistants, Kevin Dineen and Ulf Samuelsson. Jeremy Colliton, a 33-year-old ex-player, just five years removed from his playing career, has been named head coach. Last season with Chicago’s AHL affiliate, Rockford, Colliton led the club to 40-28-8 record and a two playoff rounds won before falling in the third round.

Quenneville, the second-winningest coach in NHL history only trailing legendary, Scotty Bowman, can be credited with building the Blackhawks core into perrenial cup contenders. But since winning their last cup in 2015, the club has yet to win another playoff round and failed to qualify for the postseason last season for the first time since 2008.

In 15 games this season, the 6-6-3 start wasn’t enough. Not for a team that is trying to remain contenders in the ultra-tough Central division and Western Conference. A move to try and get in front of the problem while the season is still young. 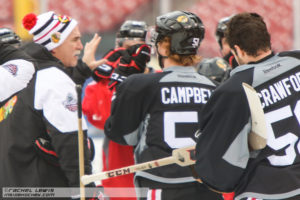 “This is certainly a very difficult decision,” Blackhawks general manager, Stan Bowman said. “But I believe it is in the best interests of the Blackhawks organization. We need to maximize each and every opportunity with our playoff goals in mind and create continued growth and development throughout our roster at the same time. After much deliberation the last several days, with great respect to what Joel has meant to the Blackhawks, we knew we had to make a change. Along with our appreciation for everything Joel has accomplished for our franchise, we also thank Kevin and Ulf for their many contributions and wish them success in the future.”

Colliton surpasses New Jersey’s John Hynes as the youngest coach in the NHL. But age doesn’t concern Bowman, who believes he is positioned well to find success from the club.

“We are extremely fortunate to have Jeremy Colliton in the Blackhawks organization and feel strongly that he is best positioned to continue leading our players here in Chicago,” he said. “All of those associated with Jeremy strongly believe he possesses many of the tools that will make him a successful head coach in this league. He has been very impressive as a communicator, a leader, and coach. He knows the Blackhawks system, understands our players and our culture and we believe he gives us the best opportunity to have success and grow as a team.”

Quenneville, who turned 60 in September, has the type of resume that will surely garner some calls. There’s one vacancy in the NHL–the Kings named Willie Desjardins interim coach on Sunday. But ‘Q’ has the kind of credentials to make teams re-think their setup.