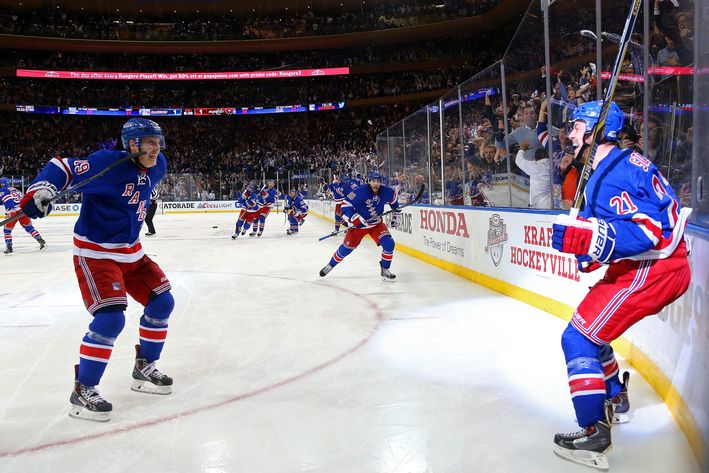 You can come close, but you can’t kill them.

For the second consecutive year, the Rangers recovered from a 3-1 series deficit in the second round. Last year they shocked the Penguins. This year, it was the Capitals left stunned. They’re the first team in NHL history to recover from such a deficit in back-to-back postseasons.

Their history is incredible, their resilience remarkable. Ten consecutive wins in potential elimination games at Madison Square Garden. A 14-3 record over the last three years overall. Fourteen consecutive one-goal games in the playoffs, including Wednesday night’s 2-1 triumph in Game 7 of their second-round series against the Capitals.

“It’s tough to put that into words,” said captain Ryan McDonagh. “I don’t know. We just really believe in each other. We believe in this structure. Our coaching staff does a great job setting a tone, making sure we’re really prepared in all situations.”

The Rangers were 101 seconds away from elimination in Game 5. But they didn’t die.

Nearly 74-percent of teams that score first in a Game 7 go on to win. The Capitals got the first goal. Yet, the Rangers didn’t die.

“It was a great game,” said Rangers rookie Kevin Hayes, who scored the team’s only goal of regulation. “We had to battle through some adversity when we were down 3-1, but to win like that in overtime shows the character of this team.”

Stepan was the hero in the Rangers’ latest magic act, potting a rebound goal at 11:24 of overtime, sending Madison Square Garden into absolute delirium, and lifting the Rangers into the Eastern Conference finals for the second straight year, and third time in four years.

“You can’t ever count this group out regardless of what happens,” McDonagh said. “Like I said at the beginning of this series, it was going to be tough. We had to take it one game at a time, we found ourselves down, but gave ourselves a chance on home ice, and we really utilized that advantage.”

“Our approach is always the same,” said forward Carl Hagelin. “We want to win a game. We want every single player in this room to play at his best. Usually in Game 7s, one guy steps up.”

The overtime was the first Game 7 overtime involving the Rangers since the 1994 conference finals, when Stephane Matteau scored his famous wraparound goal to send the Rangers into the Stanley Cup Final. Matteau, as well as five of his teammates from that championship team of 21 years ago, were in the building to watch perhaps the most-tense game played at Madison Square Garden since that title was won.

“It’s harder to watch from up top, probably, than it is on the ice,” Hagelin said of the frantic pace that is overtime in Game 7. “My approach is just that anything can happen. Any shot is a good shot. You usually get re-energized once overtime starts. That’s why guys can keep skating.”

“You tell your players to focus on their job and what they need to do, you’re doing the same thing,” Vigneault said of coaching in Game 7. “There was a lot of atmosphere, there were some tense moments, but guys just play. It’s probably more stressful for the fans watching the game than it is for us.”

Perhaps the most resilient of their group is goaltender Henrik Lundqvist, who stopped 35 shots to win his sixth-straight Game 7. During that span, his goals against average is 0.81, his save-percentage .973.

In his last ten elimination games at Madison Square Garden, he’s a remarkable 10-0, with a 0.96 goals against average and a .968 save-percentage.

“It’s hard to describe,” Lundqvist said. “You think a lot throughout the game, you try not to be ahead of yourself or anything like that but it’s hard not to. You know everything is on the line. The last five minutes of the third period and overtime you know one mistake and [either] it’s all over or you’re moving on. It’s such a great feeling when you see the puck go in.”

Hayes’s goal was the second-ever by a Rangers rookie in a Game 7. Muzz Patrick had the other one during the 1939 playoffs.