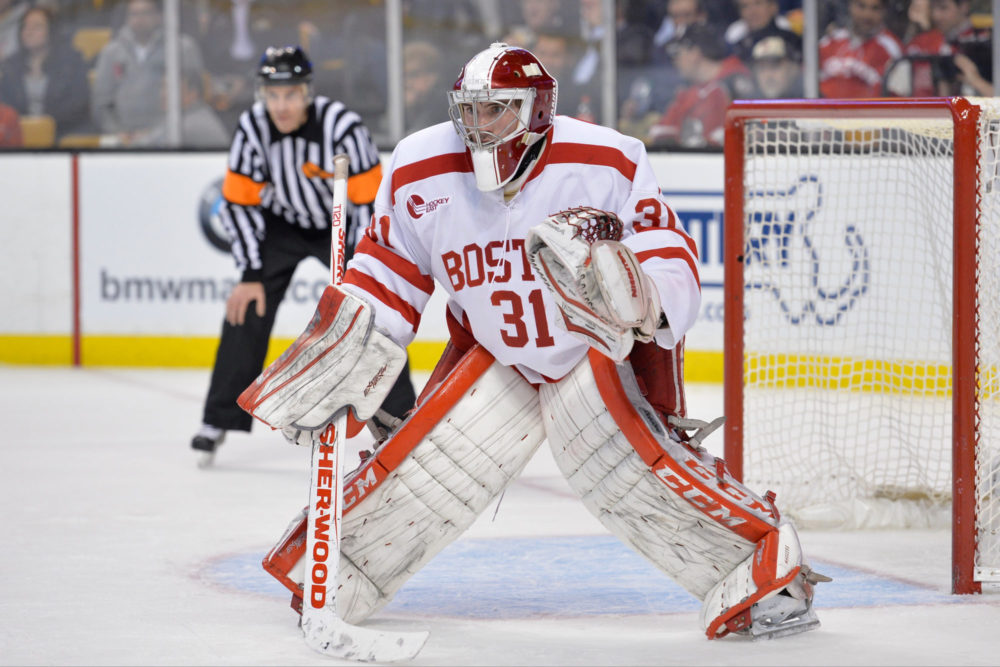 On Monday night, the Boston University Terriers and the Harvard Crimson will compete at the TD Garden for one of college hockey’s most sought after titles, the Beanpot. This Boston winter time staple features two of the top teams in the nation in the championship game. BU will go for their record 31st Beanpot after losing 1-0 in overtime to Boston College in last year’s title game. Harvard hasn’t had as much in tournament success. Monday will be their first time in the championship game since 2008 and their chance to win the title for the first time since 1993.

These teams are both riding excellent seasons, but different weeks, into Monday. They won their opening games in markedly different styles. Harvard built a lead midway through the third period and held on for dear life against Northeastern. They then rode a four-goal effort by Ryan Donato to a 6-2 victory over the 6th ranked Union Dutchmen. They come in with momentum and good health. Merrick Madsen was injured at the end of the Northeastern game and missed practice on the following Wednesday. He played on Friday against Union and made 32 saves, moving well and containing one of the most potent offensive attacks in the country.

BU topped the Boston College Eagles 3-1 in their first Beanpot game on Monday. They jumped to a fast lead and their efforts at the blue line and Jake Oettinger’s 23 saves grounded the 7th ranked Eagles. After that, BU hit the road and lost to the 9th ranked UMass Lowell River Hawks 3-2. Lowell scored a power-play goal at 8:53 of the 3rd period and BU couldn’t get their offense up for one last push. They come in healthy aside from Nikolas Olsson being out with a broken leg suffered against Merrimack back on January 27th and looking to redeem themselves after a tough loss on the road.

These teams have faced off once this season. On November 22, BU outlasted the Crimson for a 5-3 victory. Sean Malone powered the Crimson offense with 2 goals, but Harvard could not contain BU Freshmen Dante Fabbro, who had one goal and two assists for his coming out party. This game was early on in the season when BU was still integrating their young players into the rotation and transitioning from an old core of Ahti Oksanen and Matt Grzelcyk.

Since then, Patrick Harper, Patrick Curry, Chad Krys, Dante Fabbro, and Kieffer Bellows have made themselves an integral part of the Terriers. But of all the freshmen, Clayton Keller has made himself the offensive focal point of the Terriers. He had a nation-best 15 game point streak that was broken in the loss to Lowell on Friday. He is leading the Terriers in goals, is second in assists, and is the points leader for BU. He’s played in only 21 of BU’s 29 games and is still a contender for the Hobey Baker Award this season. Harvard will have plenty to contend with in BU’s freshmen class, headed by Keller.

On the flip side, Harvard’s forward line is filled with seasoned veterans looking to earn some long overdue hardware to the Crimson. This will be the first time that anyone on this team will play for the Beanpot championship, and Harvard hasn’t won the title since 1993. The senior class of Sean Malone, Tyler Moy, Alexander Kerfoot, Phil Zielonka, and Devin Tringale is loaded with potent offensive attack and veteran guile that has gotten Harvard to the 4th rank in the nation. Head coach Ted Donato has credited his unit for being focused and motivated and intent on winning for the program. They are reinforced by young players, headlined by Ryan Donato. Donato is the leading goal scorer for Harvard after a 4 goal explosion against the Union Dutchmen. He has bought into the Harvard drive to win as much as possible and is a point of emphasis for the BU Terrier’s defensive efforts.

The goaltenders are close to even for the game. Merrick Madsen was injured against Northeastern but is looking well after the Union game. He is in the top 20 for goals allowed average and save percentage, and is anchoring the Harvard unit. His counterpart has grabbed attention for his sterling play this season. BU Freshman goaltender Jake Oettinger is a top 5 goaltender in the nation, with a 1.80 goals allowed average and a .935 save percentage. He has made some of the saves of the year and has claimed the starting job in his first year on Commonwealth Avenue. Madsen is a junior, thus holding the veteran advantage over the Terrier freshman. However, this will be the first time in the Beanpot Title game for both goaltenders. With that in mind, Oettinger should have the advantage on paper, but Madsen is not to be overlooked at all.

Considering the momentum Harvard is riding after the Union game and the talent on display every time BU takes the ice, this is as hard a game to predict as will be played in college hockey this season. They are even opponents and have the potential for both big scoring efforts and gritty defensive games. This is the championship game that should be played at the TD Garden for the Beanpot final. In my eyes, this game is a toss up. Both teams have the talent needed to win, and the drive to do it. I don’t know who will win, which is the draw of the game. We should be in for a classic.