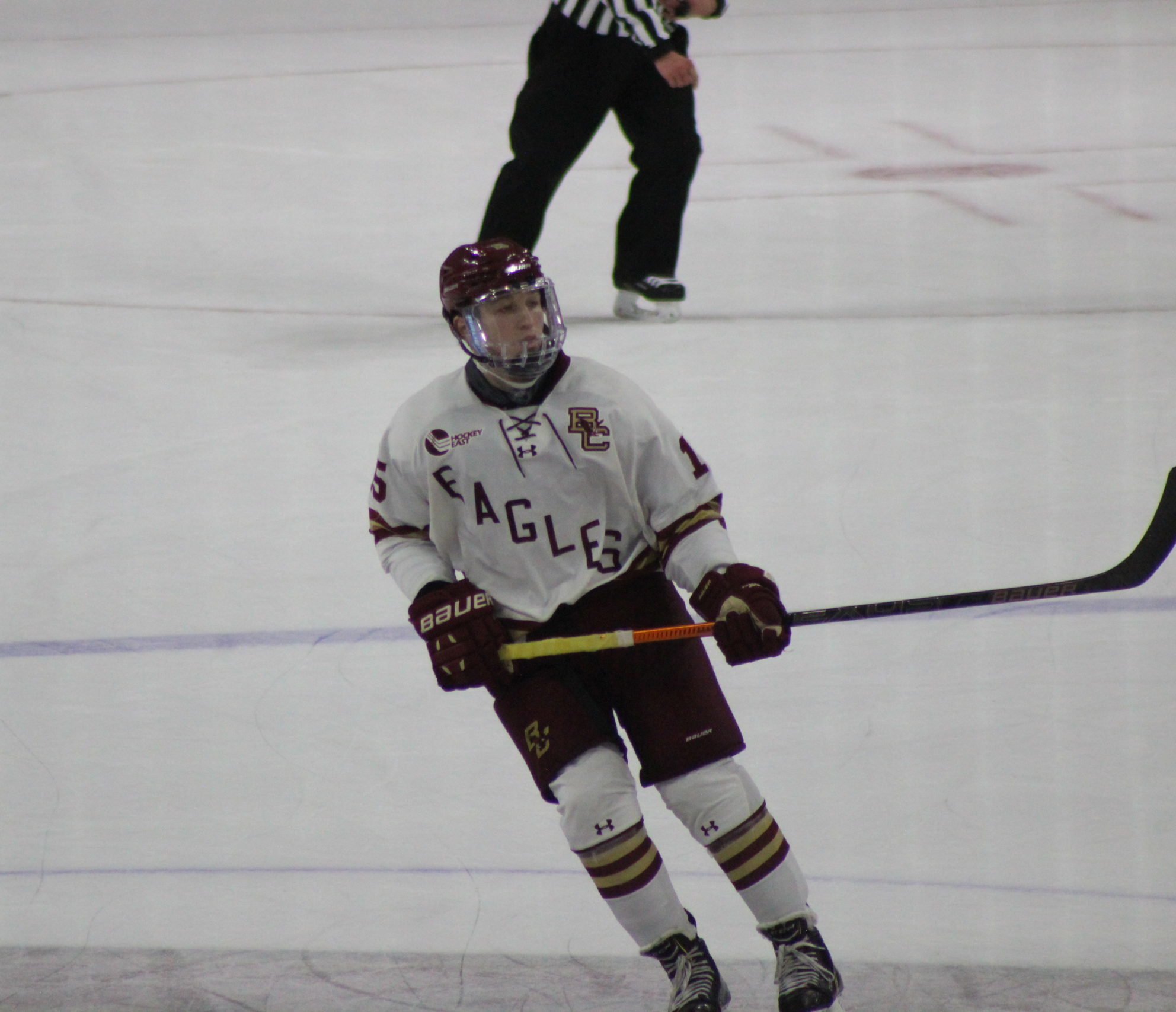 Chestnut Hill, MA – Four games does not a career make, but what a great way to start. Boston College freshman Trevor Kuntar scored his first career goal Friday night and added a pair on Saturday, as BC swept the weekend series against #12 Providence College.  Kuntar has four points in his first four games. The Eagles (4-0) are perched atop the NCAA polls and flying high during the early portion of the 2020-21 season. The 6′-0″ forward from Williamsville, NY, has been riding a wave of positivity since the summer.

Originally committed to Harvard University, Kuntar was able to de-commit when the Crimson had their season canceled due to COVID-19. BC wasted no time in scooping up the talented freshman in July. Tallying 89 points (47 G – 42 A, 105 games) in the last two years for the Youngstown Phantoms of the USHL, BC wasn’t the only Boston team keeping tabs on Kuntar. In October, the Boston Bruins drafted him in the 3rd Round of the 2020 NHL Entry Draft (#89 overall).

Showing a team first attitude was how the 19-year-old responded to the question of how netting his first goal, a game winner, felt.

“Obviously as a team, we won both games, so that was awesome. I think we really are perfecting our game here and getting better as we go,” said Kuntar. “Personally, it was nice to get my first goal but I think as we play more games, and I adjust to the speed and can focus on my game and keep getting better and better. So I can hopefully keep doing that.”

The Eagles have been without sophomore Alex Newhook, who is in Canada awaiting the start of the World Junior Championships, and will be losing goalie Spencer Knight, defenseman Drew Helleson, and forward Matt Boldy for the tournament as well. For players like Kuntar, this is an opportunity to solidify their place in a stacked Eagles line-up. BC could potentially be without those four for four games.

“We wish those guys could be here,” said Kuntar of his teammates. “They’re a big part of our team. A good way to look at it is to see it as a good opportunity to get better and prove myself, and have success in this opportunity that I’m going to be given.”

This sentiment is echoed by BC Head Coach Jerry York, who referenced the 1986 classic movie “Hoosiers” to his team during a team meeting this week. York discussed the scene in which Gene Hackman, as coach Norman Dale, benched a player for not passing the ball. After another player fouled out of the game, the referee told Dale that they only have four players on the floor, to which Dale replied, “My team’s on the floor.”

“I just told the guys we’re not going to stress on the fact that we’re losing Boldy, and Knight, Newhook and those guys. This is our team.” said York. “I think the kids appreciated that.”

“He showed us the video clip and explained it,” said Kuntar of York’s reference. “He related it to our team, how there’s some guys missing, and he’s saying ‘This is our team here, this is our club and either way we have to focus on our game plan to have success.'”

Kuntar’s three goals were of varying style but all within 15 feet of the goal. His first career goal was a side of the net rebound on his bid. Saturday’s first goal was a wrist shot through traffic from just below the top of the left circle. His second goal was a one-timer from in between the circles.

“I don’t think I really have a type of goal,” said Kuntar of his goal scoring ability. “I obviously love getting in the dirty area, scoring those greasy goals in front, but I like utilizing my shot a lot too.”

“One of my assets is I can score from different spots on the ice, whether it’s in front of the net or from the top of the circles with my shot. I definitely like the greasy ones in front but it’s also really nice scoring from the slot too, sniping one.”

York praised Kuntar’s work ethic and tenacity down low thus far. He’s liked what he’s seeing from the freshman and thinks the rewards are showing already. That’s something that stuck out to the Bruins as well.

“In watching him year over year, the continued growth to his game, his skating has improved,” said Bruins Associate Director of Amateur Scouting Ryan Nadeau. “He just works hard, and he’s constantly a kid that’s abrasive to play against. That continued this year, and we’re very intrigued with the growth that he’s had.”

Kuntar credits this to his father, Les, a former goaltender at St. Lawrence University and with the Montreal Canadiens.

“He’s the main reason of why I am where I am now today,” said the forward. “He’s the one that got me started in hockey, and ever since I’ve just loved it. He’s been around it in college and pro, he’s given me awesome tips, kind of led the way there as I was younger, and still leading the way now. It’s been really nice having his influence.”

Kuntar sees himself in the mold of Jamie Benn or Matthew Tkachuk.

“I love to compete every night. I’m a hard-working player. A two-way power forward,” said Kuntar.

“I think one thing I can definitely get better at is my feet. Just getting quicker. As you keep progressing in the game it gets faster and faster. I think that is one of my skill sets I’m honing on to get better at.”

No one knows what “Heights” will be reached by Kuntar and the Eagles these next few years, or what’s “Bruin” at the NHL level but Kuntar is relishing his future in Boston.

“It’s definitely surreal, obviously the Bruins are such a great organization, they have such a good history, an original six team,” said the third round pick. “I think just being in Boston and playing at Boston College is just a dream come true really. The moment it happened (being chosen by the Bruins in October), I just had no words, it was awesome. My family was there (at BC). I just couldn’t be more happy and excited to keep going and hopefully play for them (the Bruins) one day.”