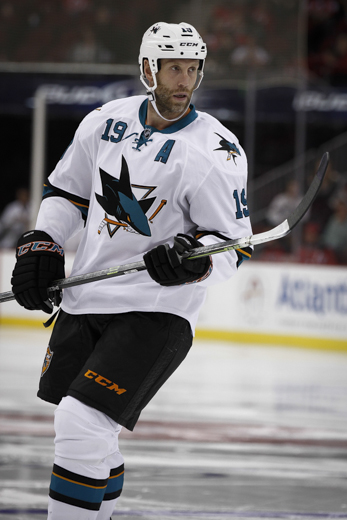 Joe Thorton prepares for a faceoff in the San Jose Sharks' game against the New Jersey Devils on October 18, 2014 at the Prudential Center in Newark, NJ.

Battening Down the Hatches

It’s definitely a glass-half-empty, glass-half-full being an Anaheim Ducks fan right now. On the one hand, they’ve had a historically bad start, though it’s hardly sensible to talk about starting when the NHL season very rapidly approaches its midpoint with the Ducks playing game 27 Friday night at home versus San Jose.

On the other hand, they’re just four points out of third in their division coming into Friday. But then again, they have played a game or two more than three of the four teams they’re chasing, and in some cases, the other teams have three games in hand.

Their goaltending, despite a record of two losses, two wins, and an OT point over the five games before Friday, has been pretty good. And their penalty killing is lights out, with an 87% kill rate, best in the NHL (better at night’s end at 87.5%). Their power play, in case you’re curious, is 17th in the NHL with an 18.7% strike rate. Of course, getting that number up requires that a team actually score some goals, and that’s not been easy. Even Coach Boudreau knows that, saying after the game, “We could have scored more goals, but we’re sort of snakebit this year on the whole goal-scoring thing.” Indeed, pucks rolled wide. They hit sticks. They didn’t go in. Fortunately for the Ducks, they didn’t need to.

If you’re not scoring yourself, and they had only 51 goals before Friday, woefully behind the rest of the Pacific, then you’d better hope your goalies are pitching shutouts, which they obviously can’t do every night. The Ducks, in fact, have allowed fewer goals than anyone but the two top teams in the Pacific, and yet their total goals for and against is 117, which is behind the rest of their division except for Los Angeles, and anyone who knows these two teams or has seen each play knows that they are absolutely, diametrically opposed to each other in style of play.

So what gives? Until Getzlaf had a five-assist night against Calgary in late November, he wasn’t putting up points. Granted he missed four games with his appendix coming out, but he still has but 17. If that’s not significant, how about this: just one of those is a goal. That puts him on pace for a four-goal year.

The team leader in points is Perry, with 18, on nine goals. That’s somewhat complemented by scoring from the blueline, with Vatanen having 14 points and Fowler ten.

They’re giving Nick Ritchie an extended look, and he’s finding his chances though not putting the puck in the net. More on that in a moment. The only other lineup change is that Nate Thompson is back, having missed all but one game due to injury, and he is playing along with Chris Stewart and Mike Santorelli. Call it the reclamation line, and they’re tough.

Stewart, after being challenged by his coach to produce, has done that in a couple of ways. He has four goals and three assists, but he’s fighting fairly regularly. On Friday, he added to his 26 penalty minutes with a tilt against Michael Haley, a call-up so late in the day that he didn’t make either the printed official game roster or the Sharks’ press notes.

Maybe he’s a slow starter, but Haley played in the OHL for five years, then the ECHL and the AHL while bouncing up and down to the NHL. He has logged 64 games in nine years as a pro. He has two goals, an assist, and 189 career penalty minutes, plus five more versus Stewart. If you’re wondering why Stewart was wasting his time against this guy, you join thousands of others in the stands in Anaheim. Then there were those who just love to see the fighting.

The two teams started off well enough, firing 10 shots each on goal in period one. Nobody scored.  Things slowed down as period two wore on, despite the Sharks outdoing their  first-period shot total by one, with 11 in the frame. The Ducks had just six. The score stuck at zeros, and there were just a couple of chances that signified. Silfverberg fired a pass across to Ritchie, who couldn’t get a hold of it. On the other end, Brent Burns walked a puck in from the blueline and deked around a couple of guys to shoot, but he put it mid-gut on John Gibson, who saved it.

Period two ended with the Sharks obviously having made the decision to open play up somewhat, and they had a couple of good looks from Thornton, Braun, and Karlsson, then from Donskoi, Hertl, and Joel Ward. And if you think I just made up a couple of those names to test you, you’re wrong. The Sharks’ media corps likely is having as tough a time as the Ducks’ does trying to get the spellings right.

Period three saw the Ducks take a 1-0 lead when Mike Santorelli got his fourth by working hard with his line mates to hold a puck in the Sharks’ zone. He eventually got it and took a fade-away wrister through traffic. It might have ramped up off of the blade of Brenden Dillon on defense. I asked him about it after the game, and he said, “I just turned around and shot it and luckily it went in, so I’m not too sure.”

He described the game by saying, “It was a tight-checking game, and the ones we’ve played against them previously have been a good example of that. The three of us got in on the forecheck, and a couple of shots, then the puck was down low. [Thompson] made a good play to me, and it went in.” It would eventually stand up as the winner.

The two prior games between these teams this year were 2-0 for San Jose and 1-0 for the Ducks. Three games and four goals. Nate Thompson described the game as “fun, close tight hockey game. There’s not a lot of room out there, and you have to fight for all your ice. The whole game, but especially in the third period, we played great.”

He said that the Ducks went hard third period, “not sitting back, being on our toes and going for that win.”

Coach Boudreau had a similar take on things: “They were pretty determined group today. We’ve had a couple of times where we’ve let it slip away, played good and got nothing from it. I think today was a game where they weren’t going to let it slip, and they didn’t.” He said after, “For all the games we’ve won in the past and this year, that might be our best third period, shutting them down and not giving them chances, and that’s a great hockey team, a lot of goal-scorers. To shut them down is pretty impressive to me.”

He was happy with Gibson, naturally, but when asked whether Gibson wanted to move back to San Diego, he said, “No, probably not. It’s a beautiful city, but . . .” and then the press conference was over, laughter all around.

“It was a five-man effort. We were getting pucks in, we’d get it back, and D were active coming down the wall. We were backing each other up. We were doing everything we were supposed to be doing, and we got results.” This was Thompson’s summation of the evening’s activities.

The Ducks passed up or missed a couple of shooting chances in the next few minutes, and as the game wound down, one couldn’t help but look back at the season thus far. Six times the Ducks have scored no goals. Six times they’ve scored one before tonight. Five of those contests have been losses. But they won this won, and they held the Sharks to two shots in period three while getting ten themselves.

Thanks to Ducks broadcaster Steve Carroll for having me on as his between-periods guest. Feels pretty good to be in the NHL, let me tell ya.

Thompson paid a compliment to his goalie, John Gibson: “I played with him back when he was 19, and you could see that he didn’t have a heartbeat. In a good way.” The last added, as you might expect, swiftly.

The Ducks announced 15701 fans in attendance. They now play at home against Pittsburgh and Carolina before embarking on a swing that has them play seven road games punctuated only by one game at home, against Philly the day after boxing day.

The good news, schedule-wise, is that once the Ducks celebrate New Year’s at Vancouver, they play at home for more than two weeks through late January.