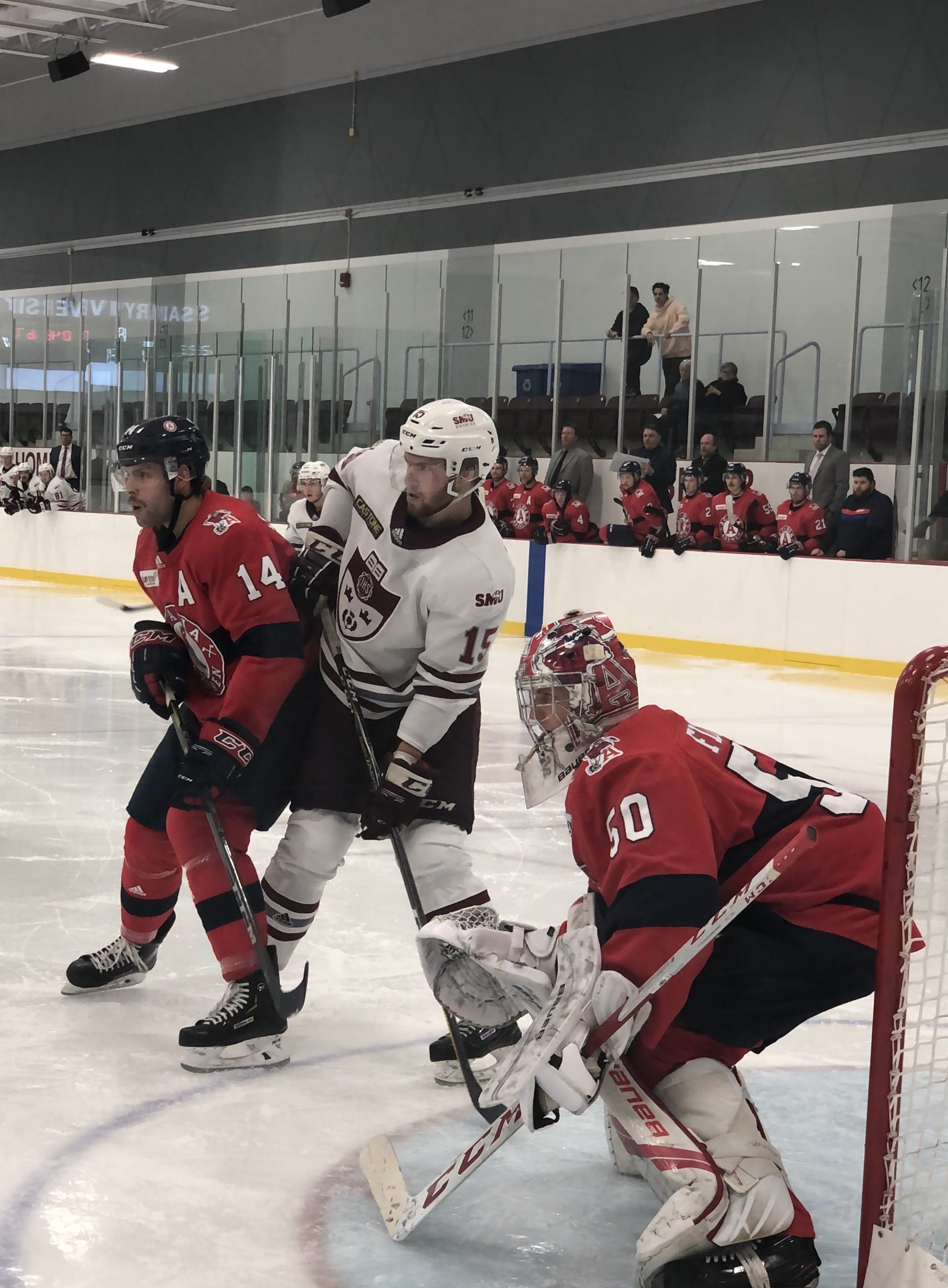 Guys, guys, guys, you’ve gotta try harder, sooner. That’s the message Saint Mary’s men’s hockey coach Trevor Stienburg should have been giving his team after their 4-2 loss against Acadia on Wednesday night. His team worked the shots to 38-30, with some dangerous flurries in the last ten minutes of the third period, but by then the cause was lost.

The game had spirit. There was a hard check to the head that got Dawson Theede thrown out of the game and awarded a two-minute minor. There were some scrums and scuffles, and some face-washing. The pace was quick, though not by the home team, Saint Mary’s, to start.

The Huskies were coming off two wins against Dalhousie over the past couple of weeks, each on a Saturday. They now have a 3-2 regular season record.

Things began poorly for the home team. The Axemen were up 3-0 at the end of period one. That after Saint Mary’s controlled the puck early. The shots were 6-6 early, 14-12 for Acadia after one period.

Here’s an example of how things went: Jonathan Hampton carried the puck out of the corner to Sam King. King shot wide, and Acadia grabbed the puck, ran down, and scored. Shortly after that, Saint Mary’s had a power play. A puck labelled for the top corner hit a stick, a body part, or something, and went wide. A Saint Mary’s player had the puck in front of the net, with the goalie down. Had he wheeled around counter-clockwise, he would have scored into the empty  side. He turned clockwise instead, and the goalie got it.

The Huskies got a goal back, the only scoring in the second frame. It came within the first two minutes off a turnover.

Saint Mary’s was getting way more zone time than Acadia as the period wound to half. The shots were 23-21 in favor of Saint Mary’s as the period ended, and Acadia’s goalie had spent a considerable time down on the ice, injured. He got up and kept playing.

Each team scored in the third period. The Acadia side was first, pushing their lead to 4-1 before Saint Mary’s scored to erase the three-goal deficit. These happened so closely that the announcement for the Acadia tally wasn’t finished when the home team scored.

Saint Mary’s put on a flurry midway through the third. With Dylan Di Perna at one point getting several shots standing right in front of the goalie and gaining his own rebounds. They also had a couple of close calls, with a pass from Bronson Beaton to Stephen Johnson going through the latter’s legs in the slot and King passing toe Noah Zilbert down close to the net. His backhand chance was stopped. Nicholas Welsh put a puck cross-slot to Anthony Repaci, the captain, and he got a one-timer off from a knee, but shanked it a bit.

The late pressure should teach these guys something: they can get to the net, and get the puck there. They just gotta do it earlier. Way, way earlier.

The player of the game was the visiting team’s Garrett McFadden, who notched a goal and added two assists. Mitchell Balmas led the game in shots with seven. Neither team scored on the power play. Acadia had four chances, the Huskies three. 452 was the official attendance.

Saint Mary’s heads to PEI for a game Friday evening. The UPEI team then travels to meet the Axemen at home on Saturday evening.

Yes, I wrote Growing Up Hockey. Yes, other people have read it and like it. Why not you?