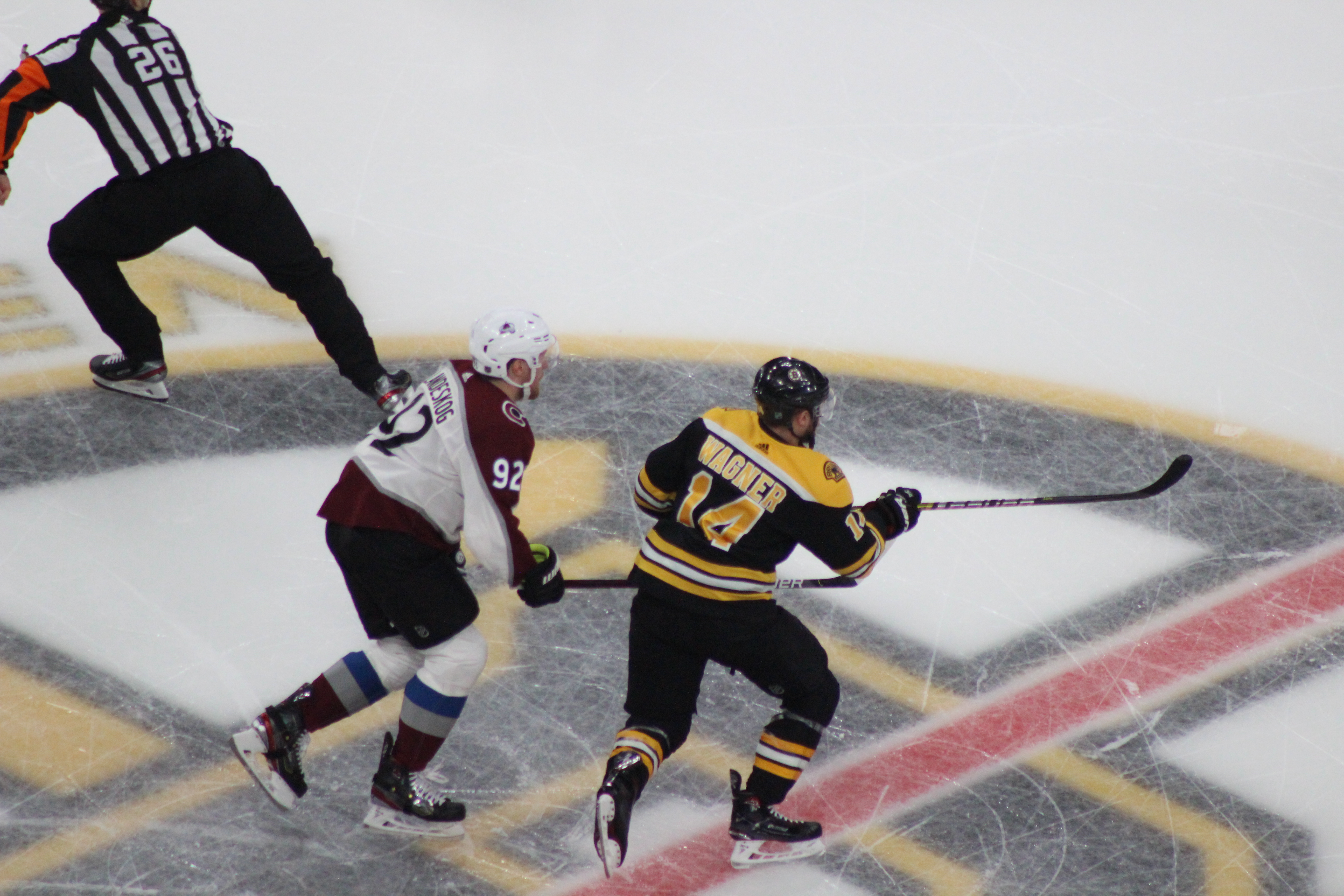 Boston, MA – The Colorado Avalanche and the Boston Bruins each entered Saturday night’s tilt at TD Garden riding multiple game unbeaten streaks. For the visiting Avalanche it was five straight while the Bruins were unbeaten in their last 13. Boston hadn’t lost a regulation game at home yet this season.

Despite falling behind early the Avalanche scored four unanswered goals to give the Bruins a deficit they couldn’t overcome, ending Boston’s winning streak and home unbeaten streak.

Colorado’s defensive corps had three quick shots on Jaroslav Halak in the opening minute and a half.

The Bruins struck first when Chris Wagner deflected a John Moore slapshot from the point past goalie Philipp Grubauer at 13:14.

Brett Ritchie had a breakaway opportunity off of the resulting face-off at center ice but shot the puck wide of Grubauer.

Matt Nieto fired off a slap-pass to Valeri Nichushkin in front of Halak, Nichushkin deked on Halak and slid the backhander past Halak’s outstretched leg tying the game at 17:25. Grubauer took himself out oof the game during this break in play and was replaced by Pavel Francouz.

Colorado outshot Boston 9-4 and won the face-off battle 8-6 for the opening period.

Danton Heinen tipped a Moore shot just wide of Francouz to open the second. Mikko Rantanen hit the crossbar on a bid later in the period.

Ian Cole fired a slapshot far-side past Halak from the top of the left circle at 9:17 making it 3-1 Avalanche. Cole’s first goal of the season was assisted by Mark Barberio and Joonas Donskoi.

The Bruins responded with a Brandon Carlo chance that was turned away by Francouz. Boston had a few shifts of sustained pressure in the Avalanche defensive zone but mustered few actual scoring chances.

With one minute and forty-nine seconds remaining in the period Andre Burakovsky wristed a shot past Halak’s glove with two Bruins defenders draped on him giving the Colorado a 3-1 lead going into the third period. Colorado outshot the Bruins 5-4 for the period.

As has been the case this season the Bruins seemed to come alive in the third period. Brad Marchand leveled Cale Makar behind the Avalanche bench early in the period, the defenseman left the ice holding his left shoulder as play continued. He did not return.

A High-Sticking call on Ryan Graves gave Boston a power play at 5:54. The Bruins moved the puck well in the Colorado zone but Francouz was solid in relief. As the penalty on Graves expired one of the Avalanche defenders floated a clearing pass to Graves as he stepped out of the penalty box. Marchand drew a Hooking penalty as he caught Graves and forced the defenseman’s shot wide of Halak at 8:02.

The Avalanche power play was short-lived as Donskoi was sent off for High-Sticking just twenty-five seconds later. The Bruins pressure increased during the four on four action. Marchand, David Pastrnak, and Charlie Coyle were cycling the puck well in the Colorado zone. Marchand set up Pastrnak for a bid that Francouz turned away, Coyle had a rebound attempt stopped by the Czech keeper. Even with a line change Boston kept threatening. Matt Grzelcyk had a shot while pinching down low and Heinen’s rebound attempt sail just wide of the Avalanche goal.

Again the Marchand, Pastrnak and Coyle line had a solid scoring chance but Coyle missed the net with his shot out front. The Bruins pressure led to a High-Sticking call on Gabriel Landeskog at 17:39.

Boston pulled Halak for the ensuing face-off in the Colorado zone. The Bruins fired away but a combination of blocks by the Avalanche defenders and Francouz in net held off the late period surge.

Landeskog scored an empty net goal shortly after his penalty had expired giving the Avalanche a 4-1 lead with three seconds left. Shot totals for the evening were even at 20 a piece while Colorado won the face-off battle 22-15.

“I think Colorado is an excellent hockey team,” said Bruce Cassidy. “Full value for their win. Snapped pucks around, played to their strength, a lot of pace. Their “D” really move the puck well. They attack, work together well inside. Really worked hard to keep the puck out of their net late in the game when it really mattered. I think that’s where the growth of their team would be I guess right now.”

“For us,” said Cassidy “I guess lack of urgency, we talked about it the other night, again tonight. Some of that in our game, definitely early on. If we’re on our toes I think we’re cleaner. I’m not going to say that we’re not going to execute from time to time but it’s been an issue for us. Some of the unforced errors, I just look at the play where Grizz (Grzelcyk) takes the hit, Heinen goes back with the puck [which led to the Burakovsky goal] if we’re playing the right way we’re in and out of our end, we’re gone. There’s just a lot of details that are working against us now where we just got to wake up and start playing to our abilities in those situations and live with the result. Doesn’t mean you’re going to win but I just think we’re leaving plays on the table because of our lack of urgency to understand that teams are coming after us and they’re good teams.”

“I liked our game a lot tonight,” said Avalanche coach Jared Bedner. “I thought we were skating, the forecheck was rolling early. It was a tight checking game but had really good pace to it. I thought both teams were pretty disciplined. And we ended up making a couple of plays.”

“We lost Grubauer shortly into the game, Francouz came in, did a great job. We lost Makar for a while at the end of the game, so with a short bench there I thought our “D” did a nice job. Lots of sacrifice too especially at the end on the penalty kill, on the five vs six, four vs six guys getting in front of shots, blocking shots. Real good commitment there.”

“We played the right way tonight,” added Bedner. “We had guys above the puck all night. Guys were skating and tracking. good habits, good details especially on the defensive side tonight.”

Colorado hosts the Calgary Flames on Monday at the Pepsi Center in Denver at 7:00 EST. The Bruins travel to Ottawa to face-off against the Senators on Monday at Canadian Tire Center at 7:00 pm EST as well.