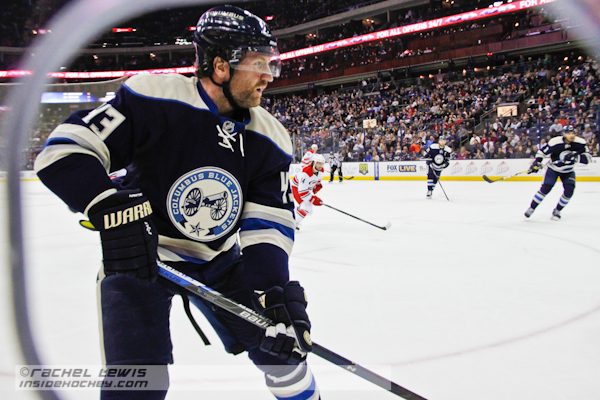 Around the Metro: Columbus Blue Jackets

The Columbus Blue Jackets will have a short walk to the stage on the floor of the First Niagara Center in Buffalo, New York to make their first round selection on Friday night. It’s a short walk, but an uncomfortable one, even if it’s become a familiar. In this case, part of it was luck, winning the third and final lottery spot for the new format of the NHL Draft Lottery that also saw Winnipeg win a spot, jumping up to 2nd. Toronto, the league’s last place club, retained the 1st overall pick. Another part though is a trend that has yet to end.

For Columbus, it will be the 13th time in 16 Entry drafts that they are selecting within the top-10.  After a season in which another promising coach became a casualty of a rough start–0-7-0 to be exact, the Blue Jackets will again try and turn a corner, this time under the direction of John Tortorella.

It’s as close to official as one can get five days before the draft, but Auston Matthews first overall to Toronto, followed by Patrik Laine second to Winnipeg appears to be how Friday’s first round will open. That puts the ‘Jackets on the clock. Most believe their pick is also all but official and will be Finland’s Jesse Puljujärvi. The winger scored 28 points in 50 games last season playing for Karpat of the Finnish Elite League. They could also consider London Knight’s winger, Matthew Tkachuk, who tallied 107 points in 57 games in the OHL. Whoever they pick, it would be surprising if they’re not in the lineup next season. The option to trade back from 3rd overall could also exist, but would have to return a decent haul.

The Blue Jackets have much of its lineup returning next season: 11 forwards, 7 defensemen and 3 goaltenders are signed for next season. They have a shade over $3 million in projected cap space to sign RFA’s William Karlsson and Seth Jones. That probably isn’t enough space to work with, so the likelihood of a rumored Scott Hartnell trade seems high.

In trading Hartnell they’ll also rid themselves of a No-Move clause, something that could be a major factor next summer when the anticipated expansion draft comes along. If they do trad him though, they will also be trading his 23 goals and 49 points he scored last season, among the top point-getters on the team. They’ll instead look for players like Karlsson, Matt Calvert, Kerby Rychel and Alex Wennberg to take more steps forward. Boone Jenner, 22, had a career-season scoring 30 goals and 49 points. He figures to be an essential part of the Blue Jackets’ future success. That future also includes Oliver Bjorkstrand, Paul Bittner, Sonny Milano and Daniel Zaar.

Bjorkstrand, drafted in 2013, is coming off his first season of pro hockey which included a 12-game NHL debut, scoring 8 points in 12 games and a 29-point season with the Lake Erie Monsters, Columbus’ AHL affiliate. His minor league season ended with a Calder Cup championship and MVP honors registering 16 points in 17 games. He’s on track to earn a top-six wing spot with the Blue Jackets next season.

Columbus helped mitigate some of its problems on defense with arguably the biggest trade of the season, swapping Ryan Johansen to Nashville for Seth Jones. Johansen exited the organization with 79 goals, 114 assists and 193 points in 309 games. A steep price to pay, but at just 21, Jones could be top-pairing defenseman for years to come. Their defense also boasts David Savard, the 25-year-old who begins a new five-year, $21.25 million contract next season, Ryan Murray, the Jackets’ 2nd overall pick from the 2012 draft, and Zach Werenski, drafted a year ago and figures to be another integral blueliner. They, along with the veteran core of Jack Johnson, Cody Goloubef, Dalton Prout and Fedor Tyutin round out a defense that Tortorella can work with.

There are some question marks, specifically the play of Johnson, who has found his name in the headlines for other reasons relating to his 2014 filing for Chapter 11 bankruptcy protection, had one of his worst offensive outputs in his career. Through 60 games he recorded just 14 points. Despite that, he was named a member of Team USA at September’s World Cup of Hockey, where he’ll play for Tortorella. But he’ll need to find some production in his final two seasons under contract.

Jarmo Kekalainen is still re-tooling the club’s roster, but does have the luxury of a well-stocked goaltending stable. Sergei Bobrovsky did struggle again with injuries and was not at the top of his game–.908 save percentage, but it allowed the opportunity to become acquainted with prospects, Anton Forsberg and Joonas Korpisalo. Forsberg made four appearances, going 1-3-0. Korpisalo meanwhile saw 31 appearances, going 16-11-2 with a .920 save percentage.

Columbus has to stop taking one step forward only to take two back. The Brandon Saad deal from a year ago was good. They’ve drafted well. But success has gone ignored by regular season failure and just two postseason appearances in their history.

The ‘Jackets have roughly $70 million committed to next year’s roster. Dropping Hartnell’s $4.75 million ticket would be beneficial, but is he the only one? The inability to expose players with No-Move clauses could hurt a team like Columbus, who currently has six players with such clauses under contract beyond next season.

When you look at the roster, there’s enough pieces to think they’ll be competitive–especially if they’re healthy. There’s also a built-in hesitation in raising any expectations for this club.