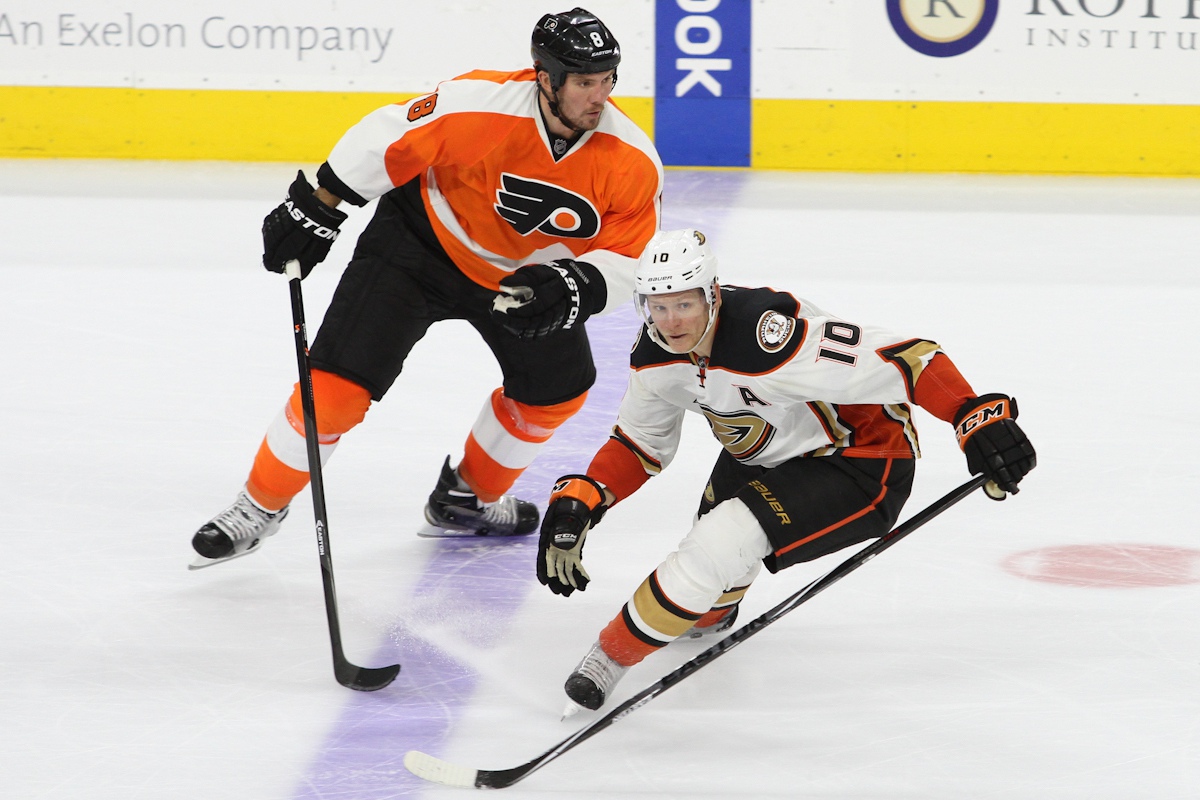 Are The Ducks Catching Up To Themselves?

Is math happening to the Anaheim Ducks? Is their early success catching up to them, the same way they caught up to opponents in 14 games this season? Prior to last weekend, they were hard on the heels of Chicago. They had as many regulation wins as the super-streak record-breaking Blackhawks. There still isn’t a team in the Western Conference with a better chance of catching the Blackhawks, but Anaheim is losing ground.

Since defeating the Blackhawks last Wednesday, the Ducks have lost three in a row. What gives? Were they succeeding at an unsustainable level? Corey Perry admitted that it is possible, maybe the team was due to hit a rough patch:

There’s always peaks and valleys but we try to get over the valleys as quick as possible, and start climbing back in the right direction. That’s what we have to focus on.

That isn’t to say the team is comfortable with losing three in a row for the first time this season, as Perry explains:

It’s a big deal in here. We know … this sort of season you can’t have losing streaks and you know … you’ve got to get out … as soon as possible. That feeling we had coming back in that Chicago game and beating them, that’s the way we’ve got to play, that’s the emotion we’ve got to play with.

Last Thursday, the Ducks held a record for most come-from-behind wins with 14 through 29 games. Since then, they have diluted that with pure loss. Did success, in particular winning games after trailing on the scoreboard, give them some bad habits? Ducks defenseman Sheldon Souray doesn’t think so:

We’ve come from behind in these games and I guess we’re comfortable being there, but it’s not a position of power, it’s not where we want to be by any stretch. We’ve just played well enough to win those games.

Nonetheless, the team is having trouble getting into the game early. Sluggish starts have now cost them three losses against two teams that struggled through much of the season. After the third loss, Perry said that the Ducks still know what they have to do to win:

It’s a little adversity you’ve got to deal with. You don’t like losing at home but if you play the same way we did in the second half of the game, we’re going to be successful. It’s going to take everybody in here to be ready at the start, at puck drop.

His assessment isn’t unreasonable. The Ducks did slow the Sharks’ feeding frenzy on Monday. By the third period Anaheim was barely a hair’s breadth from tying the game. Some argue that all teams sit back with a lead, and perhaps the Sharks were doing just that.

Ultimately, it doesn’t matter how or why the Ducks played badly in the first or well in the third. They did it, and it wasn’t enough.

Ducks goaltender Viktor Fasth gave some insight into the challenge the Ducks face as they try to get back on track. Asked what happened on the Sharks’ second goal, he said: “The guy shot it and it went in.” After a suitable pause to let that sink in, Fasth continued:

That’s what happened. I mean of course I wish I’d had that one. There’s always things you can do different on every goal you let in so I’m going to look it over on video and I’m pretty sure there’s a lot of mistakes that I want to fix when I watch the video. That’s how it is every game so I’m disappointed we didn’t get the win today.

It is a simple problem: put the puck where you want it. It is also a complex one: stop forgetting how to do that. The team can watch video until they go blind and it still comes down to focus in the moment, not blame after the fact.

Souray explained that the Ducks came up short in just about every area against San Jose on Monday:

They beat us at our own game. Usually it’s us winning those battles, taking those pucks hard to the net, out-muscling teams, and they did that to us tonight … They’re a good team, give them the credit they’re due, but we just weren’t any where near ourselves and we haven’t been for the last few games. We talked about it, we know what we have to do it’s just a matter of going and doing it.

Head Coach Bruce Boudreau, asked what he thought Souray meant by “not ourselves,” explained what he thinks the team’s identity should be, or shouldn’t be:

“ourselves” should be a tight-checking grind it out along the boards kind of team that doesn’t allow a lot of offensive plays in our zone and we were giving them chance after chance and standing still and not doing anything. And it’s not just one, it was a lot of us … that’s part of not being ourselves.

It certainly sounds like they saw the game the same way. Neither Souray nor Boudreau have been with the Ducks for more than a season. It is possible that such fresh expectations account  for some of the team’s greater success this season.

Will it be enough to get back on track, or will the Ducks have to try something new to regain their footing? Souray makes it sound like they have to land somewhere in between the two:

We’ve got to understand that we’ve played well all year to put ourselves in the position that other teams are going to be ready for us. We should have a little bit of a swagger for sure and we deserve to be where we are because we’ve played very well but we’ve gotten away from that a little bit. … So we’ve just got to start a little bit better, … Every game it’s going to be hard. We’re not going to panic but we do have to have a sense of urgency if that makes sense.