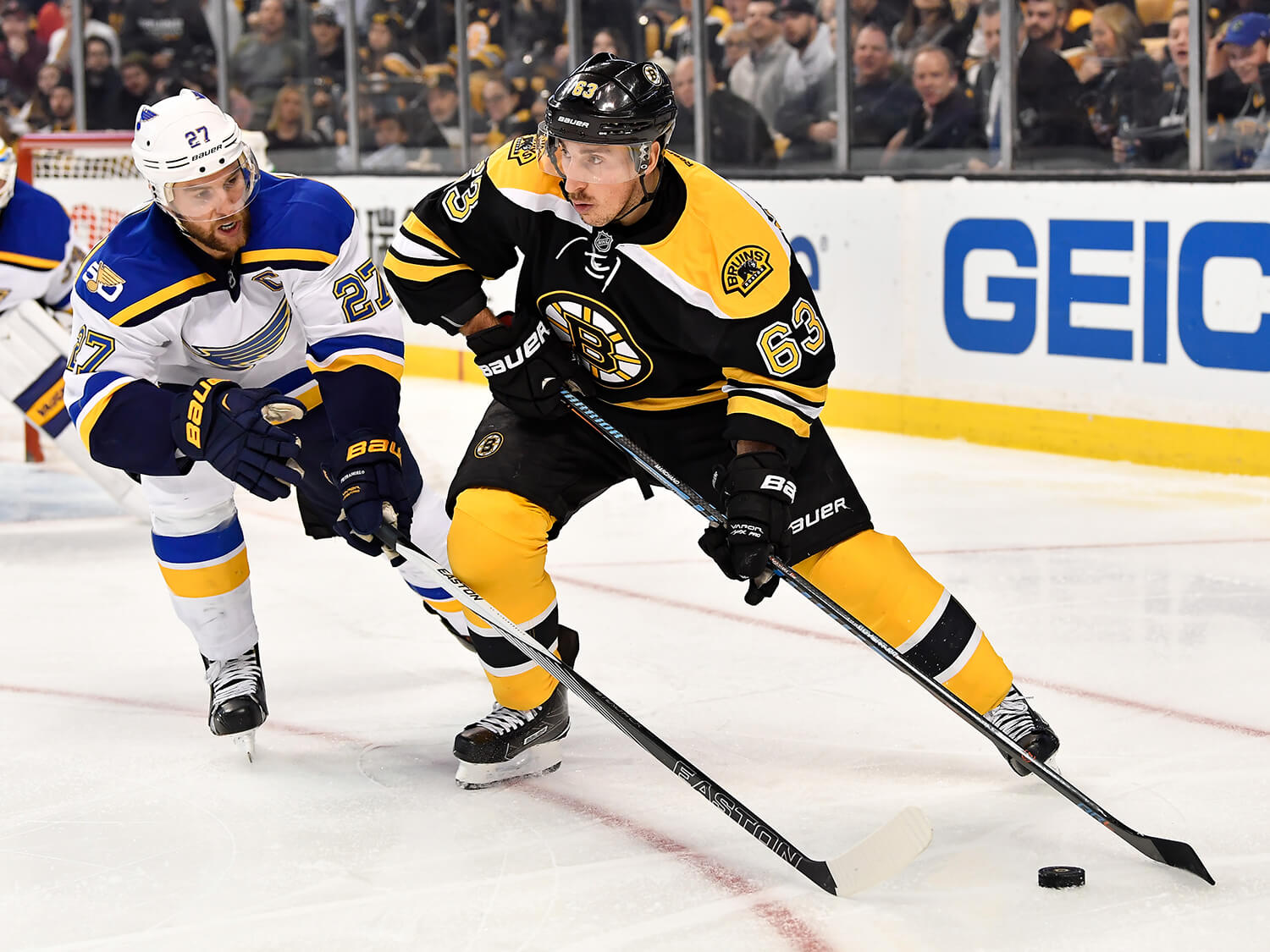 And Then There Were Four

So after the story we released a little over a week ago, the stage is finally set. Our predictions through two games of the second round of NHL games proved to be hit or miss. We predicted that the Columbus Blue Jackets and Carolina Hurricanes would battle for the Eastern Conference crown, but in the end that matchup will be between the Boston Bruins and Carolina Hurricanes. In the Western Conference, we predicted to see the St. Louis Blue and the San Jose Sharks, so we got 75% of the bracket right. Now that the final four teams are set, here’s what to expect.

The Boston Bruins will get home ice against the Carolina Hurricanes in the Eastern Conference Finals. The Hurricanes did not own home ice in either of the first two rounds, so they are no stranger to starting a series in unfamiliar territory. The Hurricanes are also a Cinderella story to most of the league. Those that have followed them know that they have been the real deal since Christmas, owning the best record in the NHL since then if you include the regular season and playoffs. On the contrary, the Boston Bruins are likely the most highly regarded team remaining in the playoffs for a couple of reasons; they have been here before and they were among the league leaders in points for the duration of the season. So far in the playoffs there have been some interesting and exciting series. Each of these teams has had one of those, with the Hurricanes likely having the most exciting series of the playoffs so far when they played Washington. Some of the keys to game one for both of these teams are going to be similar. Here’s what they are:

Be physical early. The team that comes out using the body and finishing their checks early will likely made the presence known for the series. It’s always nice to be the team doing the hitting instead of the one getting hit, and with two teams that can play physical, it will be a tolling series for each of these teams. The Hurricanes come into the Eastern Conference Finals with 399 hits through 11 playoff games, the most hits per game of any teams remaining. Meanwhile, the Bruins come in with 409 hits through 13 playoff games; the most of any team in the playoffs so far.

Goaltending. Both of these teams are riding their goaltenders into the conference finals. The Bruins, behind the solid play of Tuukka Rask, carry a record of 8-5 into Thursday night’s game. The Hurricanes on the other hand, travel to TD Garden riding the shared responsibilities of Petr Mrazek and Curtis McElhinney. The two goaltenders shared time in the regular season, but Mrazek carried the playoff workload until he sustained an injury in round two that forced Curtis McElhinney to fulfil the duties for the remainder of the series against the Islanders.

Don’t play from behind. This is one of those keys to every game that does not need to be stated, but will be anyway because it is such a key to every game. The simple fact is that it is much easier to play a game if you are not trailing or have the lead. This is especially true for the Hurricanes, as they are a team much more well known for their stellar defense as opposed to an explosive offense. The Bruins will not struggle as much from behind as the Hurricanes would, but neither team wants to put themselves in that position.

Play styles. The one thing with these teams that is different is the play styles. The Hurricanes like to sport a run-n-gun play style, where the tempo does not slow down too much. They like to get behind the defense and take advantage of two-on-one opportunities. They also like to keep their opponent limited in the number of shot opportunities they are given. Their top two lines can be a force offensively on occasion, but their bottom two lines are truly old school grinder lines meant to wear down the opposing team. The Bruins, in comparison, have four solid lines that they can run consistently. While the Hurricanes are the best conditioned team in the playoffs, playing against a team that runs four lines will be difficult.

Who’s got the advantage? It’s hard to give a clear advantage to either team in this series. The Hurricanes defense is stingy enough to limit anyone to few scoring opportunities, and the goaltending for each team is comparable with each team carrying hot goaltenders. The difference is special teams. The Hurricanes have struggled staying out of the box and the Bruins will take advantage of that if the Hurricanes present them with the chance. With the two offenses and defenses being fairly even keeled with each other, the series should be entertaining with hard hitting hockey, fast paced games, and some gifted forwards on each team. The Bruins take the advantage since they have home ice and will take advantage of the Hurricanes going to the box, but that has meant nothing to the Hurricanes so far.

The San Jose Sharks and the St. Louis Blues are set to face off in the Western Conference Finals. San Jose is familiar with this position as they advanced to the Stanley Cup Finals in 2016. Likewise, the Blues are familiar with this position as well because the Sharks beat the Blues in 2016’s Western Conference Finals. This season, things are different. The Sharks have never been able to get over that hump with the current roster they have, and though it may look like they can do it this season, they are only here because of some help from the officials in Game Seven in each of their first two round’s victories. The first was the major – game misconduct called against the Vegas Golden Knights that eventually led to four power play goals and an overtime win. The second, which happened last night, was a controversial call that disallowed a Colorado Avalanche goal for offsides. The play was originally ruled a good goal on the ice, but after a challenge by San Jose, the officials ruled that the play was offsides on what appeared to be inconclusive evidence to everyone but the officials; they must have had another angle. Anyhow, the Blues and Sharks are two of the most potent offenses in the Western Conference, which is likely why they are in the position they are in. Though the Sharks finished with more points at the end of the season, here is why the Blues will advance to their first Stanley Cup Final since 1970.

Goaltending. If there is one area on the ice where the Blues have a clear advantage, it is their goaltender. Jordan Binnington, a rookie, carried the NHL’s last placed team midway through the season to a Western Conference Final. Without the coaching change and the goaltender change, the Blues probably would not be in the position they are in now. Binnington has been an absolute beast in the regular season, but even more impressive in the post season. In round one, the Blues defeated a Winnipeg Jets team featuring Patrick Laine, Blake Wheeler, and Dustin Byfuglien. The second round had them up against the Dallas Stars, whose standouts include Tyler Seguin, Jamie Benn, and Andrew Cogliano along with a few other solid players. The Sharks will have their hands full offensively trying to get pucks past Binnington. Good news for them, they have the most offensive defensive core in the league, so it could make for a good matchup. If the Sharks want to contend, they will need exceptional play from their goaltender, Martin Jones. Jones has been average in the playoffs thus far, but the Blues bring some firepower with them into this series; that means Jones will need to pick his play up. The goaltending duel in this series could turn the tide more than any other aspect of the series.

Defense. Similar to the importance of goaltending in the playoffs, defense is just as important when it comes to putting your goaltender in a position to make a save. Most people would say that the Sharks have the better defense in this series with their two main studs, Brent Burns and Erik Karlsson holding down the blue line. In reality, they are the two best scoring defensemen left in the playoffs. That does not mean they are the two best defensemen left. A lot of times the Sharks defensemen get caught up too far and it leads to a breakaway or a two-on-one going the other way. If any of the teams in the league can expose the Sharks for this, the Blues are one that can with their highly skilled and speedy forwards like Vladimir Tarasenko, Braden Schenn, and Jaden Schwartz. More likely than not, the Blues defensive core will play better defense in the series, but the Sharks defensemen will make up for their lackluster defensive efforts by putting a few in the back of the net. At the end of the day, the matchup will be even, but they do say that defense wins championships, and the Blues may have the advantage in that department.

Who’s got the advantage? Although we used the excuse of home ice for the Bruins getting the advantage over the Hurricanes, the Sharks do not get that grace. The Blues have the advantage in this series. Heading into Game One, the Blues finished the regular season tied with Hurricanes for the best record since Christmas, only behind Tampa; and if you include the playoffs, they have the second best record since Christmas, only behind the Hurricanes who are 8-3 in the playoffs compared to the Blues 8-5. Simply put, the Blues are on a hot streak right now and they honestly come into the series with the more complete lineup from top to bottom. Do not be shocked if the Blues expose holes in the Sharks’ defense.

Recap: The Hurricanes versus Bruins series is a bit of a toss up. With the way the Bruins struggled in their first round series against a Toronto Maple Leafs team that had a star-filled roster but could never get it together on the ice and a second round series against a hot Columbus Blue Jackets team, the Bruins need to have their stuff together if they want to win the series. After the Hurricanes knocked off the defending Stanley Cup Champions in a dramatic fashion and then routed the Islanders in four games, they are firing on all cylinders. The Blues also head into the Western Conference Finals firing on all cylinders after defeating an awesome Jets team and a solid team down in Dallas that really turned it on for the playoffs. The Sharks will need to get their defense together for this series, otherwise the Blues will run away with it.