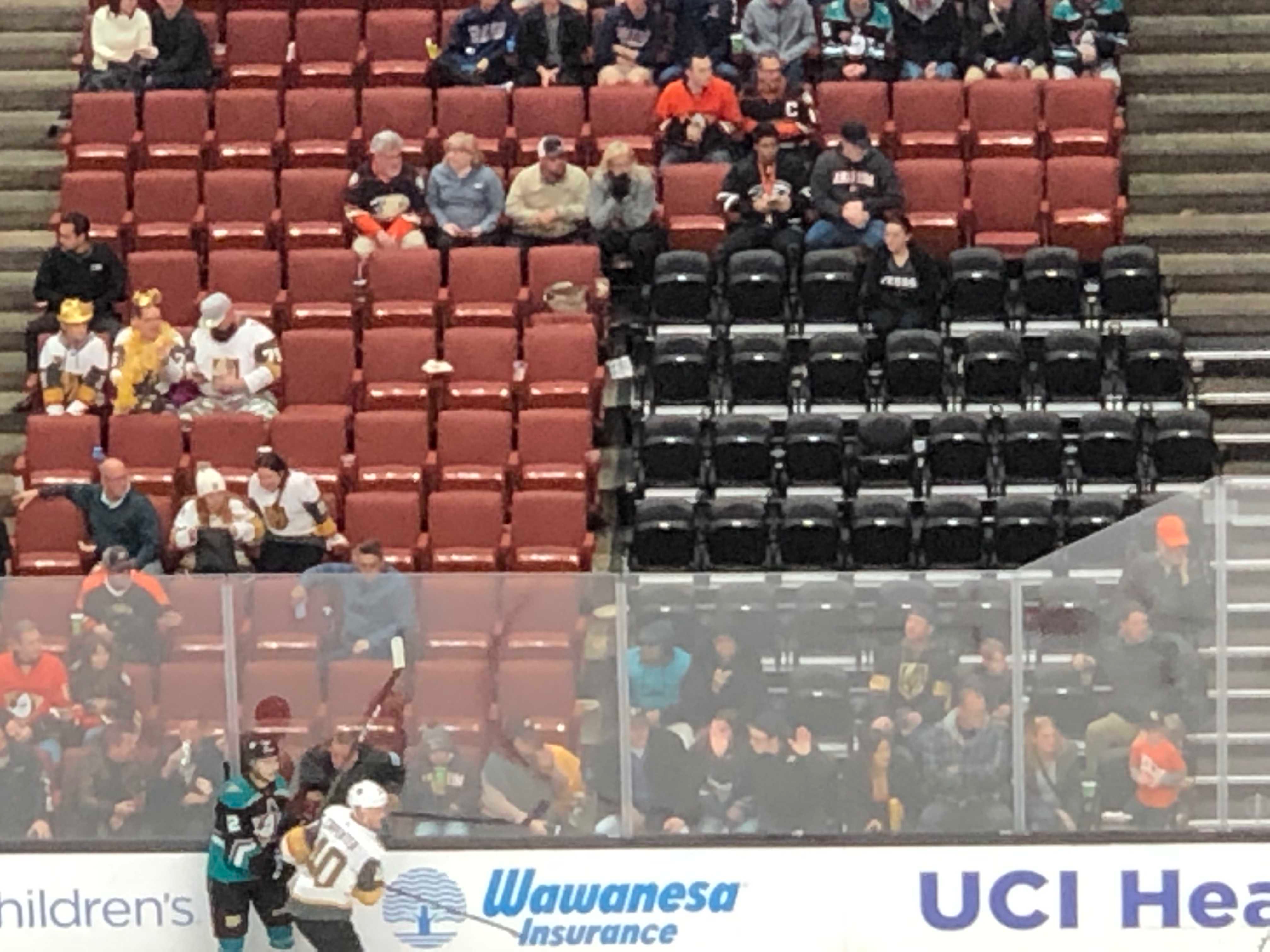 It never really hit me how much hockey has changed until seeing the Golden Knights, and their fans, at Honda Center in Anaheim for a Friday night contest. Now, don’t mistake this: I’ve been to Vegas to see a game. It was a spectacle. Frankly, a ridiculous one. Perhaps tiring, if endured game after game, though what people say is that that’s for the outsiders, the one-gamers in town to gamble and watch hockey.

Or maybe it started that way, but it’s been embraced by the locals. They want to do this. Sure, it’s a bit over the top (isn’t everything in Vegas?). But again, make no mistake: I’m not in the business of stealing anyone’s fun. The action on the ice is what it is. If people want to endure the silliness off of it, then they’re welcome to it.

I’m quite OK with the “jerks” in Carolina, too. If they wanna celebrate, they should do it. If you don’t like it, don’t watch. Nobody’s asking you to participate in these pantomimes. Think about it. If I go to Charlotte Motor Speedway, and I hate victory burnouts, and I going to throw NASCAR under the bus and say my day at the track is ruined just because someone does one? No. I’ll just not watch that part. Simple.

For hockey, I prefer the wildness of Winnipeg, the dignity of Montreal, the nervous tension of Toronto, where I’ve also covered games, to Vegas or Carolina. But if all of these other teams want to be crazy, then it’s time to embrace that. Hockey’s a global game now, and an American one, no matter how much I think it’s only we Canadians who really get it.

Tell you what—if the Vegas fans weren’t out in force in Anaheim, many of them ready long prior to the warmup to greet their Golden Misfits, the arena would have been a significantly quieter place. As it was, the lower bowl was filled at least three or four seats deep, nobody actually sitting, when the Knights took to the ice. The signs were funny. Most were asking for stuff. “29 All I want is a puck from Fleury 29” is one example. Another fan wanted a Fleury stick. Now that’s a big ask.

Speaking of the Vegas fans—let’s talk about the clothes. There must be a gold glitter store in Nevada, maybe a whole chain of them, because these people were bedecked. I’m talking shiny hats, shimmering gold blazers (for men and women both), and all manner of shawls and wraps. Nobody wore their gold with the least sense of irony, not to mention shame, which might be Don Cherry’s preferred emotion.

Nope. Hockey has been rebuilt in Sin City, and wherever they go, I imagine, the decadence is repeated. And the fun. Fleury told me after the game that the Vegas fans travel well. “I feel they travel well, especially Arizona, LA, here. We always have a lot of fans. I feel like all across the country, we find fans. In warmup, they come to our side. It’s fine.”

When the anthem singer was going through his performance, at the mention of “night,” the crowd erupted with “Knight,” albeit with a tiny time delay, like they used to do in Anaheim when Dawn Wright was the singer, and “Dawn” was shouted for her. This is the same in Canada with the anthem and “true North,” the cause for a shout in Winnipeg.

Oh, right, the hockey: Vegas is a pretty good hockey team, and they just got better. Maybe they’ve ridden their goalie a little bit hard—Fleury is at the top of the league in wins, but it’s because he’s also at the top in terms of games played, with now 55. He came into Friday with 30 wins, tied for the league lead. He exited with one more, because he defeated the Ducks 3-0.

I asked him after the game if he was tiring. “It’s fine. I think our schedule is a little less busy right now, and the guys will catch up, I’m sure. Sube [Subban] has played more games lately, as well. I think we’ll just go with the flow, one game at a time, see what the schedule is like and try to stay healthy and ready to go.”

This is his ninth 30-win season, by the way. You want to start talking about the Hockey Hall of Fame? Puck Podcast (www.puckpodcast.com) hosts Doug and Eddie had a debate about JS Giguere the other week, deciding he wouldn’t make the Hall. What about Marc-Andre? It’s getting harder and harder to argue against him. Would have been a cinch with a win of the Cup once more last year.

Anyway, he was tested only a few times in the game against the Ducks. The shots were 34-34, but most of the action was in the Anaheim end, where John Gibson was back and looking pretty good. His troubles, by the way, were more than a concussion suffered when his own player flew into him in a game a couple of weeks ago. He also had an impacted wisdom tooth which prompted the team dentist to pull all four last week. He’s fine now. Welcome to adulthood and its pains, kid.

Down the middle, Vegas features some power, with William Karlsson and Paul Stastny leading Cody Eakin and Pierre-Edouard Bellemare as the four centers. But the add, the new guy. What’s his name? Stone. What about him?

A bit of a fear here: he’s having a career year. That’s never, ever the time to sign a guy. Ever hear of Matt Beleskey? Or a host of others? Well, Stone’s within a point of tying his career best (64, 2014-15), but he has scored 20 or more goals five years running, so predicts for more of the same at 26 years old, which seems like NHL prime these days.

He did give some instant credibility to the Golden Knights in terms of scoring, with 62 points coming into the night and 63 exiting it. The nearest player to him on the Vegas squad is Marchessault, who entered the contest with 44 points and left it with 45. Think about that. You instantly make your team better by a factor of 20 points when you get this guy, yet there’s more to it than that.

Coach Gallant commented on Stone’s broad influence after the game, “I think when we made the trade for Stone, a lot of people said, ‘Let’s get going.’” The difference is palpable in the first line, which is Karlsson flanked by Reilly Smith and Jonathan Marchessault, said the coach.

Stone, in case you were pondering this, is the right wing on the second line, with Paul Statsny as his center and Max Pacioretty on left wing.

The three of them combined for five of the team’s 34 shots, though the scoring came from Karlsson on the power play (with Stone assisting), Tuch (third line), and Cody Eakin (again third line, a desperate lunge and throw of the puck into the empty net with 21 seconds to go in the game.

Tuch said  about the team’s third straight win, “We want to go make it four in a row. We have a push for Sunday’s matchup, 1 o’clock in Vancouver. It’s Sunday Funday, so we’re going to be ready for it. We’ve played pretty good hockey so far. We’ve got to clean up little bits and pieces, make sure we don’t let those back in the game.” He added that it was nice to get a goal, which he hadn’t done in a while.

No wonder the former and now-again Golden Misfits are putting up a good fight in terms of retaining their playoff position. So solid until past Christmas, they had a three-game losing streak and a 5-11-1 record just prior to the trade deadline. They now find themselves holding onto third in the Pacific and, with the win in Anaheim, eight points ahead of divisional fourth-place team Arizona. Watch out, though. The Coyotes have two games in hand.

Vegas is seven points to the good in the wildcard race, but with two more games played than the eighth-, and ninth-place teams. So watch this race—it ain’t nowhere near ended yet.

Part of Vegas’s trouble is lack of scoring, as plagues the Ducks, their opponent, held scoreless by Fleury (3-0 winner) on Friday. Their GF-GA ratio is 198-187, a plus-11. The two teams ahead of them in the Pacific, San Jose and Calgary, are plus-28 and plus-48, respectively.

Fleury keeps them in there, as he did with his 34-save shutout on Friday night. The Golden Knights also had 34 shots. John Gibson held the Ducks in it. Alone, again. He might just decide to have a couple of other teeth out if it’ll give him a holiday from this team which gives him so little goal support.

Just to give the Ducks a little play. They had some chances. Corey Perry hit the post with Fleury in full splits in the second period. (Gallant mentioned that one in his post-game comments, too.) Perry had another good chance on a long wrist shot that snapped off Fleury’s pad.

But here’s the measure of their frustration: in the second period, with a delayed penalty pending, they held the puck for about two minutes, getting several shots that glanced off Fleury and maintaining possession. They even survived the puck floating out of the zone, getting it back in and pouring on more pressure.

But then during the actual penalty, they did what they do. One guy tried to penetrate the line. Nobody supported. They didn’t get into the zone with possession. They managed one shot, no threat.

What’s there even to say about this? For Bob Murray, apparently, not much. Again, he did not come out to comment after the game, sending out an assistant coach instead.

Here’s another one. The second Vegas goal happened like this: Duck Daniel Sprong, who generally was visible and had a good game, got a mini-break that took the puck into the Vegas zone. He drifted right, lost track of where he was, spun around, and threw the puck blindly across the crease, to nobody. That led to the Knights’ defense picking it up and making a long pass up the boards (Marchessault to Tuch) for the second goal.

The Ducks just don’t have any focus. Without Gibson, and before him, Miller, they’d be getting embarrassed regularly. As it is, they’re just losing. Regularly.

After the game, along with other celebrants, one kid held up a sign: “All I want for my 11thbirthday is a win and a puck. Go Knights go.”

He got the win. Fleury afterwards said he threw a couple of pucks over the glass to a kid with a sign, but he was probably talking about pregame. Hopefully the boy went home happy, whether home is local or Nevada.

Team owner Henry Samueli presented Ryan Miller a golden goalie stick before the game, commemorating Miller’s win to put himself in sole position of most wins by a US-born goaltender. The prior record was 374. He beat Washington to get 375, and then won the next game, versus Minnesota. He was the backup on this night against Vegas.