Agitating Tkachuk versus the Nation

Agitating Tkachuk versus the Nation

If the byproduct of a condensed season with play limited to the same six to seven opponents, is that by the third meeting–you’ll be sick of their faces coming at you in the corner or in front of the net, allow me to re-introduce one Matthew Tkachuk.

For the Calgary winger has debunked this theory. If you do manage to go a shift or period without No. 19 getting under your skin, you’re either spared a matchup or non-essential to what’s happening. Seemingly wherever a scrum, board battle, loose puck or space in front is available, there’s Tkachuk.

That kind of presence has worked out well for the Flames agitator who has a ton of skill to boot. Last season, he led the team in goals (23) and points (61) while leading the club in penalty minutes, too. It was a follow-up on his breakout 2018-19 season 2018-19 season, he scored 34 goals and 77 points. His in-your-face style became a focal point in last season’s edition of the Battle of Alberta.

This season it figures to be Tkachuk versus Canada, evidenced again by Tuesday’s proceedings in the dying seconds of a 4-3 defeat to the Maple Leafs, when Jake Muzzin shot a puck at his direction. 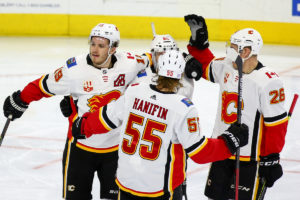 Matthew Tkachuk #19 of the Calgary Flames celebrates with his teammates

It wasn’t appreciated, though not unusual. To see Tkachuk involved is simply what we’ve come to expect. And as fans in Toronto, Edmonton and across the North get re-acquainted with the skilled pugnacist, who is the son of a 16-year NHL skilled pugnacist, it’s also a time to remind you of the 2022 Olympics.

After missing out in 2018, NHL talent will return to the Games in 2022 (of course that could very well be under review due to COVID-19, postponing the 2020 Summer games and threatening to push them back even further). Whenever it does come, the St. Louis, Mo., native should be an important part to a United States’ team.

So let’s say it’s a top-role. Does Tkachuk line up at wing opposite Patrick Kane? Brock Boeser? Brady Tkachuk, the younger brother and current Ottawa Senator? Likely one of Auston Matthews or Jack Eichel down the middle and you have a line that can frustrate and produce against the Canadians, among others.

You just know that’s the headache they’d put on Connor McDavid, well-versed in withstanding in the Calgary-Edmonton rivalry that figures to implode at some point this season. Familiarity seems to do that.

And Canada is getting its firsthand taste of what ’22 could bring.