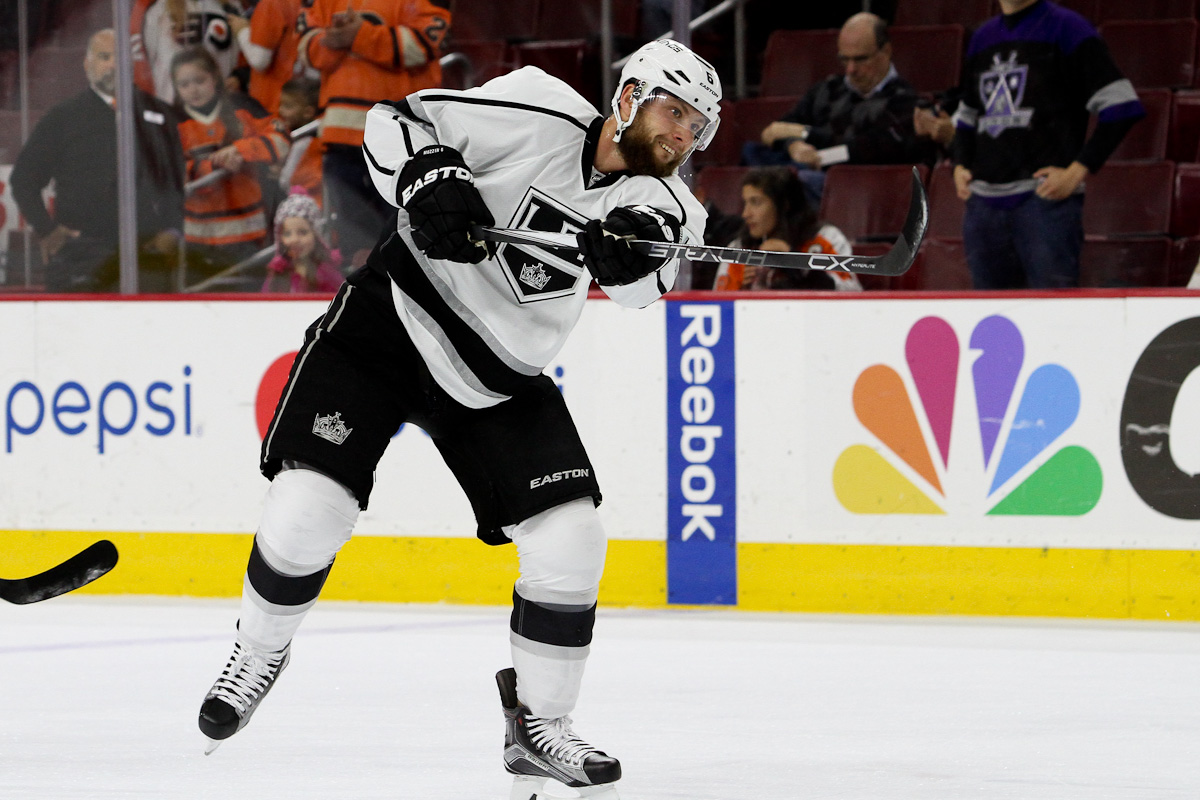 After the Kings’ 5-1 loss to Buffalo on Saturday afternoon, they kept us out of the locker room for a long, long time. So much so that the PHWA chapter, of which I am glad to be a member, planned to let the league know that the Kings had violated league rules.

When they did let us in, every player was still sitting there, all in full gear. In other words, it had been all business in the 20 minutes since the game had ended. None of us approached the regular players. Only the stars. The young guys weren’t going to tell us anything anyway.

What had been said? There were only bare hints of that, and I’ll fill you in. But first, let’s say this: it was characterized as a “team meeting”—that is, not one which was players-only.

Kopitar said what you might expect of the Captain: “Obviously the game today was bad. There’s no other way to put it. But . . . we’re going to dig ourselves out of this hole. Nobody thinks it’s going to be easy.”

He said, “I’m not going to spill any beans” when asked what had been said, but added, “We just made sure we all know what needs to be addressed.”

Drew Doughty was more into the matter of how the team was playing: “If you’re in your end, it’s hard to set up, offensively.”

Jake Muzzin was the most talkative, though he shut down anything about what the substance of the chat was, at first, taking more of a historic look at things:  “Just, talked about some stuff. What we gotta do going forward here to right the ship, but that’s all I’m going to say.”

When asked to elaborate, he said, “That’s all I’m gonna say” again.

Later, he spilled a bit: “We gotta get that fire and that passion back in our game, and not be OK with what we’ve done in the past. That’s past. That’s done.” He was talking about winning the Stanley Cup, for many of the players, twice, and moving past thinking of themselves as that team.  “We have a new year, and we need to do it again. We have to find that passion. The love of the game. The love of not losing.”

He repeated, “We’ve accepted being OK, and it’s not OK. It’s not working. It’ll be a long year. Guys will be moved if this continues. It’s not what we want, so we’ve got to take a look in the mirror and turn this ship around.”

Coach John Stevens was subdued in his response to the questions asked of him after the game, but he did invent a great new word, which you’ll see in a couple of paragraphs (so keep reading): “I’ll be honest, I don’t have an answer at this second” as to how to turn things around. “I thought after the way we’d played the other night, we would come and rip the doors off the hinges tonight.” He said the fans were great, but “I don’t have an answer.”

I’ve said for at least since the Sutter era that that’s the strategy this team relies on: Get one goal, and let Quick save the day. It worked, miraculously, for a long time. That time’s over now.

“I’m a little befumbled where it’s at right this particular time just because the conversation we had with the guys after the last game, I thought there’d be a really great response. Where is it? It’s about work and the fight to get the puck. You can talk about scoring all you want, but all we did for two periods was chase it. We gotta get to work.”

For a little background to Saturday’s debacle, let’s say they didn’t score much on Thursday night, either, in a loss to the Islanders. They did manage two power play goals to break a streak (of zeros) that had lasted since the beginning of the season. That was the only good news about the LA Kings’ performance during that prior contest at Staples Center in Los Angeles.

That night, things were so bad that John Stevens bluntly said after the game that everybody stopped playing. And no, he didn’t have an explanation as to why. But he added on that even the young players, who should be using the opportunity presented to them to stick with the team, didn’t take advantage.

Here’s the thing: the Islanders had played in Anaheim the night before. Three nights before, the Kings had been in Toronto. OK, so figure in some travel. But last time I checked, Long Island is on the east coast, and the team was thus doubly not-fresh: travel, plus back-to-back.

LA, further, had its golden-boy goalie back, after Quick had missed five games due to injury. He looked a little bit sluggish at first, but the six goals he let in on 29 shots were not chargeable to him. In fact, the commentary after the game praised him for his resolve in the face of teammates who just didn’t appear to give a darn.

Saturday mid-day, the Kings cranked it up again. Or didn’t. They had two power plays against visiting Buffalo in the first period, yielding nothing. The Sabres, meanwhile, scored midway through the first when they crashed to the net and kept after the puck as it rolled and flipped into the crease and ultimately was knocked into the net by Jason Pominville.

The Kings challenged it as goalie interference since there was a stick near Quick’s pad at one point. This didn’t look like it would be successful, and it wasn’t. So down one timeout and out of gas early, they moved on. There was no excuse for this goal, which saw the Kings standing around, backing into their net, and leaving their goalie with no help as Pominville came down from near the blueline to crash the net and score.

The Kings did outshoot Buffalo by one, 9-8, in the first period. And the first of the two power plays was pretty good. The second one, typical of them this year, featured no set-up in the zone for the most part.

The best chance of the period for LA was a pass that zipped left to right across the zone from Muzzin to Kovalchuk. He got it on edge, tried to settle it down, and settled for a shot with the puck slightly fluttering. The goalie, Linus Ullmark, got a trapper on it, and it knocked off the post loudly enough for everyone in the building to hear. That might be read as saying that the building was quiet.

Newcomers in the lineup this year so far have included Jaret Anderson-Dolan (played five of the first six games), Sheldon Rempal (debut versus Isles, played again versus the Sabres), and Austin Wagner (played three, sat three, back in for the last two games). And again against Buffalo, the stars of LA were spread out and the newbies slotted in. Pearson, for instance, was on the fourth line.

Here’s an example: the second line featured Carter at center with Kovalchuk on the left and Rempal on the right. Think about that. The answer to the “we can’t score goals” problem in LA is an undrafted 165-pounder who made it out of the BCHL on the strength of a 110-point (in 56 games) season, then played two years at Clarkson University. Not exactly a sterling pedigree, but someone sees something in him. It’s a lot of pressure to be on a line with two of the most experienced offensive players on the squad, though, especially when both are under the gun to stop underperforming.

Period two saw the Sabres put three more past Quick. LA, meanwhile, got only three shots on net during the frame, to Buffalo’s 13. The goals came at even strength, and the only infraction was a fighting penalty shared out to Bogosian of the Sabres and Clifford of the Kings. It was one of those behind-the-play challenge-type fights, and Bogo immediately wrestled Clifford to the ice. The latter got up and threw a punch, but it didn’t hit much more than air and maybe a bit of shoulder pad.

Bogosian got his comeuppance by scoring the fourth goal, with fifteen seconds left in the period. This was the 21st shot for Buffalo. It was seeing-eye, coming off the right wall and going past Quick without his even seeming to spy it until it was in the upper far corner.

The final period saw the Kings get one back on the power play. The puck went to Doughty on the point, and he held it, then put a wrister in that eluded the goalie. Kopitar was standing in front, where Dustin Brown would typically be, looking like he didn’t much want to be there. The puck eluded him and the netminder.

The Kings tried to add another by pulling Quick with just under five minutes to play. Five minutes, but you might as well lose by four as three, right? And maybe they hoped for a rally, a Stunner at Staples like back in the old days when they rallied from several goals down to win in the playoffs.

Of course it was not to be, or you would have heard about it before now. They lost 5-1 with the last goal being Pominville’s hat trick marker scored with about 25 seconds to go. He had carried the puck out, been partially tripped, gone to his knees, held onto it, and then gotten up and fired it from just the Kings’ side of center into the empty net. Three hats hit the ice.

So the Kings are now 2-5-1. Funny enough, the won every stat on the sheet: they  were better in shot attempts, faceoffs, hits, and giveaways.

Shows you that stats can only say so much. Maybe more complicated ones would tell a different story. Or maybe you could just look at the ice and see that this team had no mojo, doesn’t shoot from in close, and isn’t willing to get ahead of the play.

Stevens finished by commenting, that the Kings got behind a lot last year and came back. This year, they aren’t even chasing the game. “We got down and stayed down.”

The team now play just twice in a week, both away, at Dallas and Minnesota.