A Family Affair for the Irish

A Family Affair for the Irish

Albany, NY – The Notre Dame Fighting Irish thought they beat the North Dakota Fighting Hawks 2-1 as time expired in regulation. Still, a lengthy review of the play nullified the celebration and the goal and led to overtime at MVP Arena. Senior Graham Slaggert wasted little time and left no doubt when he sniped a snapshot from the top of the right circle past Zach Driscoll just 1:38 into overtime to recreate the moment for the Irish.

“We’ve been working on that play the last couple of weeks. We scored a similar goal against Wisconsin in the quarterfinals,” said Graham Slaggert of the game-winning play with his younger brother, Landon. “Landon does a great job screening the goalie. I kind of knew where he was going to let me shoot, and there was a big enough gap for me.”

Notre Dame moves on to Saturday’s Regional Final against the Minnesota St. Mavericks for the chance to advance to Boston, MA., and the Frozen Four. The Brothers Slaggert provided the offense as each had a goal and an assist in the win. Matthew Galajda stopped 23 shots, including a penalty shot midway through the third period.

“I’ve been talking to them the last several weeks about never getting too high and never too low,” said Notre Dame head coach Jeff Jackson. “This stuff happens in this tournament for some reason. I’m really proud of these guys for staying focused because that’s disheartening. I reminded them to remember what happened to Mankato last week because that’s what happened today. It’s disappointing it has to happen at this level but I’m proud of these guys responding.”

The opening period was a grueling slog as both teams’ physical play led to minimal flow.

“The toughest thing for us was their neutral zone, going three across (the zone), getting zone entries,” said Fighting Hawks junior defenseman Ethan Frisch. “Once we figured it out, though, I thought we had our chances.”

The Fighting Hawks had better scoring chances and capitalized on one as the first period wound down. Freshman defenseman Brent Johnson wristed a shot from inside the blue line through traffic and beat Galajda to make it 1-0 North Dakota at 18:43. Jackson Kunz and Griffin Ness assisted on Johnson’s second goal. 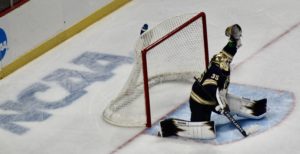 Slaggert, the younger, picked off a pass outside the North Dakota zone and raced around defenseman Chris Jandric to slide the puck past Driscoll (23 saves) to tie the game 1-1 at 1:06 of the second period. The elder Slaggert assisted on the younger’s 12th.

Driscoll and Galajda traded big saves around the midpoint of the third. First, Driscoll turned aside a backhander by Irish defenseman Spencer Stastney. Then at the opposite end, Galajda made an initial save on Riese Gaber’s mini-break, then another stop during a scramble in the crease. Gaber drew a Hooking call on Notre Dame’s Nick Leivermann, which led to a penalty shot for Gaber. 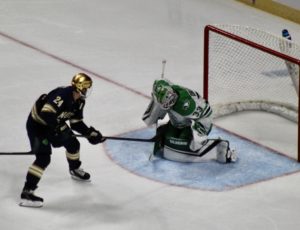 Gaber, North Dakota’s leading goal scorer, skated far over to the right before making his way in on Galajda, only to snap a shot wide of the goal.

Graduate student Jack Adams earned a Hooking penalty at 18:26 of regulation giving the Fighting Hawks a power-play over the final minute and a half. North Dakota couldn’t muster much in the way of offense before the end of the game fracas transpired.

The Irish appeared to score the game-winning goal as time expired in regulation. Landon Slaggert carried the puck into the Fighting Hawks zone; the puck ended up on his brother’s stick behind the net. Graham Slaggert went for the wraparound that Driscoll stopped, but Adam Karashik crashed the net to bat in the rebound as time expired. The on-ice official signaled s goal, but upon a lengthy review by the officials, it was no goal.

“You want to try get the call right and take as much time as you can and they did,” said North Dakota head coach Brad Berry. “They took a lot of time and felt they made the right call. It gave us new life. I thought we had a lot of energy going into the locker room and coming out (for overtime). At the end of the day, you want to make sure you get the right call and they did.”

At issue was the clock’s timing, which on the monitors in the building, there was .01 remaining. Those clocks are just for ESPN use and not the official scorers’ timer.

The NCAA released a statement following the game.

But no matter, Graham Slaggert put all that and North Dakota to rest twenty-some-odd minutes later.

“At the end of the day, we all chase that green banner that we want to hang at the end of the year,” said Berry. “That’s one of our goals. We didn’t get to check that box and hang that banner. But I tell you what, I am so proud of everyone in that locker room for playing the North Dakota way and representing our program at the highest level.”

Saturday’s game time has yet to be determined. Puck drop will either be at 4:00 or 6:30 pm EST, pending ESPN.