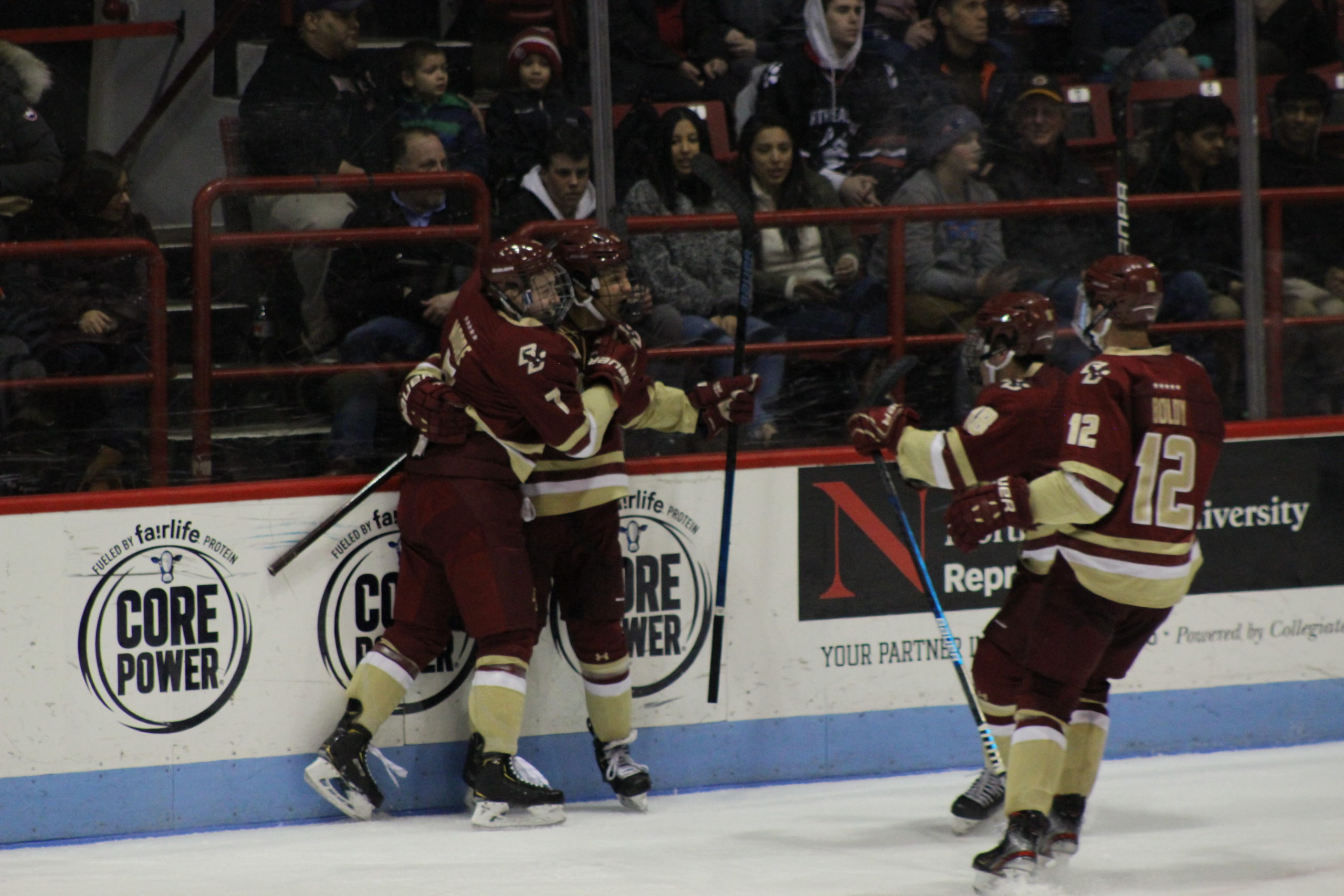 Boston, MA – The visiting Boston College Eagles used a second period goal surge to power past the Northeastern Huskies 3-2 in front of 3,054 at historic Matthews Arena. Senior forward Julius Mattila scored twice while freshman goalie Spencer Knight stopped 27 of 29 shots to put the Eagles atop the Hockey East standings. The Eagles snapped the Huskies three game winning streak while running their own to four straight games.

Northeastern was taking it to the Eagles in the first period. The Huskies struck at 2:08 when Matt Felipe caught a cross ice Riley Hughes pass just outside the BC zone. The senior carried the puck around the net for a wraparound attempt that bounced of the skate of Eagles defenseman Marshall Warren before squeaking through the legs of goaltender Knight. The goal was Felipe’s seventh of the season.

BC had the games first power play as Northeastern defenseman Tyler Spott was sent off for Tripping at 4:18. The Huskies penalty kill was solid, holding the Eagles to just one shot on Craig Pantano (31 saves) in the NU net.

Eagles freshmant Matt Boldy was called for Slashing at 8:57, but the Huskies were unable to capitalize on the power play.

Northeastern would get another crack at it when BC’s Ben Finkelstein was called for Elbowing at 14:20. Once again Knight and the Eagles successfully killed off the Huskies man advantage.

The Eagles tied the game at 18:42 when Mattila deposited David Cotton‘s drop pass between Pantano’s pads. Mattila’s ninth goal of the season was assisted by Cotton and Logan Hutsko. The trio have combined for 94 points in 25 games thus far this season.

BC came out flying in the second period. An early flurry in front of Pantano kicked off the period. The graduate transfer student made three stops before the fourth attempt was blocked by a Northeastern defender and cleared away.

A Hooking call on freshman Hughes gave the Eagles another power play at 8:16. BC continued to dominate but were unable to take advantage of the penalty.

Defenseman Marshall Warren broke the deadlock at 10:45 when he banged home a rebound to the left of Pantano making it 2-1 Eagles. The play was reviewed for the net coming off its pegs but the call on the ice stood. Alex Newhook and Jack McBain were credited with the assists on Warren’s fifth goal of the season.

BC’s Zach Walker was sent off for Boarding at 15:23. Just ten seconds later NU’s Grant Jozefek was whistled for Slashing. With the teams playing four on four Northeastern’s Felipe was in alone on Knight but shot high.

Mattila’s second of the night at 16:38 gave the Eagles a 3-1 lead. Mattila and Hutsko had a two on one chance entering the Huskies zone. Mattila fed Hutsko who then deked around the NU defender and dished to a wide open Mattila at the left post.

Northeastern made a game of it when senior Biagio Lerario tipped a Jeremie Bucheler slapshot past Knight at 6:47. The secondary assist on Lerario’s third of the season went to Jordan Harris but assistant captain John Picking helped get the play going when he carried into the BC zone, caught the rebound of his own shot off the side of the net before feeding Harris for a one-timer at the point.

The Huskies were controlling the play in the third as Matt DeMelis had a solid look towards the BC goal but his one-timer in the slot was kick saved away by Knight.

“That was a pretty good college hockey game,” said BC coach Jerry York afterwards. “It had a playoff type atmosphere going into the game and preceding the game. The game was tight checking, hard-nosed type hockey. A lot of good plays were made out on the ice. You saw two playoff teams. Down the stretch we’ve got five more of those type of games in front of us. And so doesn’t Northeastern.”

“Our team played pretty solid,” said York. “Especially the second period, that was our best twenty minutes of hockey.”

“I thought Boston College was a better team than us here tonight,” said Huskies coach Jim Madigan. “They had us on our heels particularly in the second period. We did some good things in the first period. Some in the third, but our effort wasn’t good enough for 60 minutes to beat that hockey club.”

“I didn’t see the conviction enough in their eyes going into tonight’s game that we could beat this team,” added Madigan. “That’s disappointing. It’s disappointing with our inconsistent effort, not playing to the way we need to play. Playing simple hockey. When you don’t do that you fall behind and we were chasing the game in the third period. We got it to 3-2 but it wasn’t good enough and they were the better team.”