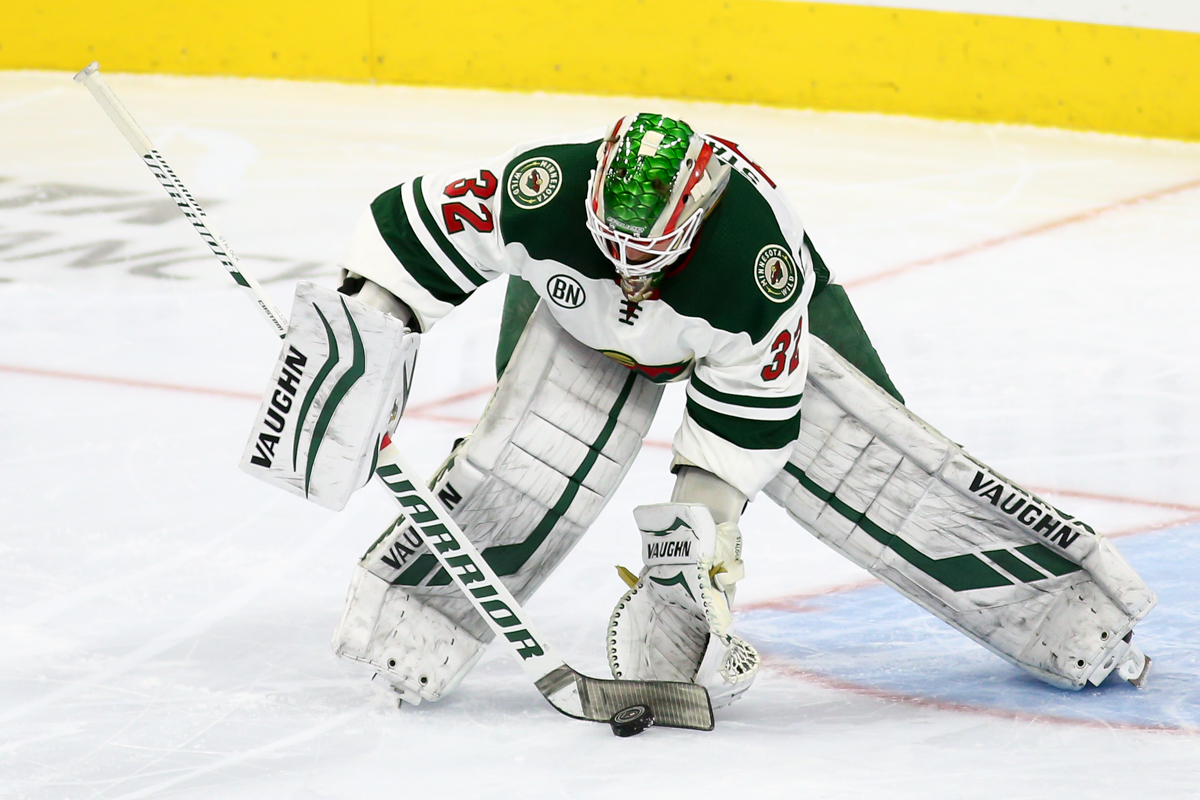 Goalie Alex Stalock (#32) of the Minnesota Wild stops the puck

Rookie mistakes are part of having a young squad. That was a bit of a theme Saturday afternoon when the Minnesota Wild visited Staples Center for a game against the Kings. First-period examples included Blake Lizotte taking a high-sticking penalty in the offensive zone and Nikolai Prokhorkin icing a puck in a panic when he had time to bank it off the boards safely and save the defensive-zone faceoff.

But no matter, because the Kings jumped out to a 1-0 lead with just 5:16 gone in the game. The goal came off a rush, with Alec Iafallo dishing to Dustin Brown on the right side. Brown fired a shot that rebounded out to Anje Kopitar, who buried it in the left side of the net. Alex Stalock had no chance.

The Wild then started to assert themselves. They had to. The game would give them a one-point up in the Western Wildcard race, because they came in to the afternoon behind third in the Central by six points (and having to jump over Winnipeg just to get to third-place Dallas). Thus a divisional placement was not likely. But in the Wildcard, they were third, a point behind Vancouver and Winnipeg and with two games in hand on Winnipeg.

The LA lead was protected when the Kings were down Lizotte when Gerald Mayhew pasted a slapshot from close in in the slot and Kurtis MacDermid went to a knee to block it. It went off the inside of one knee and hit the other, shaking him up briefly. He got up and finished the shift on the PK.

The balance of the period, the Wild pressed. They didn’t score. But they did almost right as period two began. They won an offensive-zone faceoff and saw Mats Zuccarello put a backhander off the post. The rebound went straight to Marcus Foligno in the slot, and he buried it. The clock said 19:47, but they announced it as 12 seconds. No matter.

The Kings responded immediately and forcefully. They scored two goals within a minute (actually 53 seconds), the first one shorthanded. On that one, Alex Galchenyuk passed a puck from the boards to the slot, right onto Adrian Kempe’s stick. Kempe started it back up ice with Gabe Vilardi. Vilardi was pulled down. The referee’s arm went up for a penalty. Vilardi recovered his feet, however, and was available when Kempe sent a puck across for Vilardi to redirect into the net. The offending Wild player, had the goal not been scored, was Gerald Mayhew.

The Kings now have five shorthanded goals this season, which puts them in the 17th-24thspot in the league. The league leader, Ottawa, has 15. Fifteen!! Second is Anaheim, with ten. What’s up with that?

The second goal came on a steal from Marcus Foligno by Trevor Moore. He went in on the left side at a sharp angle, but still managed to chip the puck over Stalock, who was diving out to meet him.

The Kings had the chance to pile on some more when right on the heels of the goal, the Wild took a tripping penalty, in their own zone. LA fired three shots on the PP, the most dangerous of which was Iafallo getting a puck in a crowd in the slot, not being able to get off a forehand shot, but whirling and flipping a backhand at the net. Stalock made the save. He made another one with two of his players down on the ice and Kopitar coming at the net and floating a quick shot in on goal.

All in all, despite being down 3-1, Stalock was playing a good game. The goals he let in, he essentially would have been bailing his teammates out on, and miraculous saves would have been needed.

The Minnesota team enjoyed a power play just past the halfway point of the period. The most dangerous chance was by Zach Parise, who was parked at the right side of the net. He got a puck with a clear lane to the goalie, Cal Petersen, and he took it. Petersen did a spreadeagle not unlike one that Jonathan Quick launched a couple of nights prior with Toronto in town. He made the save.

One last, dangerous chance came with a handful of seconds left in P2. The Wild rushed the puck, passed a couple of times, and took it over the blueline. Zuccarello went right to left inside the Kings’ zone and fired a snap wrister into the crowd in front of the net. It got through, and Petersen was on his knees. But he’s a technical goalie, and he was chest-square to the shooter, shoulders lifted high. It went off the left shoulder and was cleared.

The shots ended at 23-16 in the Kings’ favor to finish the forty minutes. Corsi-wise, the Wild had a number of 37, while the Kings sat at 42. Not uneven, nor had the game been to that moment. But the Kings were opportunistic—their goals on a rush, shorthanded, and off a steal.

Period three opened with the Wild taking a too many players penalty. The shots were 23-16 for the Kings. They saw the Wild do two quick clears down the ice, one on net. The PP expired, but then the Kings controlled in the zone, pushed a bunch of guys to the net, and saw Dustin Brown flick in a rebound as it sat in the crease. He was being pushed face-first head-over the goalie at the time. Typical gritty Brown goal.

This was to make the game 4-1, and seemingly out of reach. Don’t bet on that. There were as many goals still to be scored as had been already:  ten in total.

The Wild responded with an opportunistic play where a loose puck came to Foligno with the left side of the net open. He shot up and over the cage, but on the same shift, the Wild got their second tally. The puck was passed to the deep slot by Zuccarello, for Jared Spurgeon. He shot a high wrister and caught the opposite top corner. This was just a minute and a half after Brown’s goal.

They drew one closer, to 4-3, when Luke Kunin got his 15th of the year. There was plenty of time left, with just one goal needed and about five minutes on the clock. But the Kings pulled away  and ended up winning the game 7-3 on the strength of a Brown hat trick. The final three goals came from Brown, then Brown again—this time into the empty net—then Vilardi, his second career marker. You might remember IH reporting on his first one a couple of weeks ago.

The second Brown goal (overall—the first named above) was a charge from the left side, right across the front of the goal, shooting as he went. The empty-netter was Kopitar taking the puck out of the Kings’ zone and sliding it over the width of the ice to Brown. He picked it up inside the Wild blueline and put it in from a distance.

Vilardi scored with Stalock back in net. It was a whip wrister from the right dot, but honestly, the goalie looked a combination of out of position slightly, or leaky through the arm, and disinterested. He hadn’t gotten much support, after all, on a number of the prior scoring plays.

With the outpouring of goals, it was a banner day for a couple of Kings’ players. Kopitar had three points; Brown had four. Brown’s hat trick was his sixth of his career.

Brown commented about the game, “Once you kind of get through the deadline as a player, as a group of players, you see teams start to play a little better after, regardless of their situation. Guys have been able to relax a little bit, in a good way, and focus on what we want to do. I think we’ve been well prepared and executed really well in our systems, and that can snowball into everyone feeling good and playing better.”

Kings Coach McLellan said of the game, which matched the Kings’ prior high for goals in a game this season, “We gave our goaltender enough support. I thought our penalty kill again was outstanding, and we checked pretty well. Got a little bit sloppy around our net in the third, but for the most part it was a pretty good team game. Starting to sound repetitive as a coach after a lot of games, which is a good thing, that means we’re finding some consistency were doing some things right. We’re winning the right way.”

With the win, the Kings improve their recent record to five wins in a row, which is a high for the year. (So was four, in fact—their prior best had been back in the Fall, at three games.) They have seven wins and one OT loss in their last ten games. Had they been on this pace early, they would be well on track for the playoffs. As it is, they have 60 points, still last in the West.

The Kings started the afternoon with a tribute to Henri Richard, who won 11 Stanley Cups as a player. Richard died yesterday. The scoreboard had his image as the PA announcer, Dave Joseph, shared a narration about Richard’s life and career.

The Kings await Colorado, playing on Monday. That will be the third of nine home games straight.

The Wild play in Anaheim Sunday at 6pm. They will eventually end their season with four road games, going from St. Louis to New York for the Islanders, then Washington and finishing in Nashville. Whether they’ll still be in  the playoff  hunt or not depends upon them not repeating Saturday’s performance.