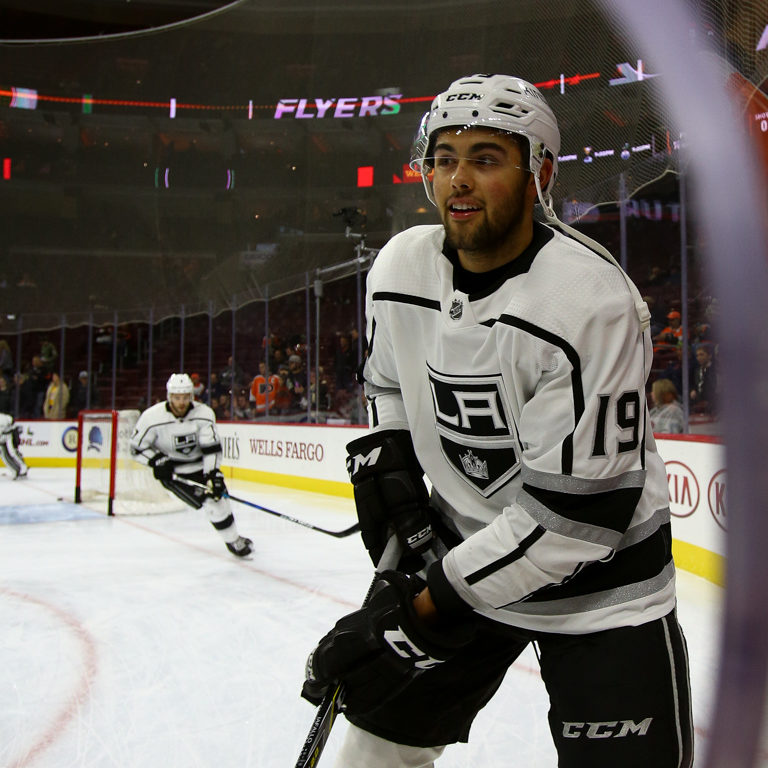 What’s missing? Quick. No, I don’t mean, be quick with your answer. I mean Quick’s missing, down with an injury that the team said he received today in practice. Campbell was the backup until that point, but was told very close to game time that he was starting.

He did a more than credible job, facing 38 shots and stopping most of them. More in a moment.

Backing up to meta-distance, the LA Kings know they need to get faster. That’s one reason for a couple of small tweaks in the lineup for game two versus the Red Wings Sunday night. Out came Kyle Clifford and Oscar Fantenberg and in went Paul LaDue and Jaret Anderson-Dolan.

The latter was not an unexpected visitor to the LA lineup, being a kid from Junior hockey who is a prospect with high expectations. They had to get him in sooner rather than later to have a look so that they can figure out what to do with him vis-à-vis his career with the Spokane Chiefs of the WHL. One exciting thing that happened to him in his NHL debut was a low bridge hit by Trevor Daley that ended up with Daley’s head hitting Anderson-Dolan’s knee. That was early in the first. Later, he would gain his coach’s praise.

“He’s an interesting kid, to be honest with you. . . .  He’s a kid that’s been very serious about being a hockey player for quite some time now although he’s young. I think he’s trained and physically matured beyond his years and mentally matured beyond his years. He’s [had] a really solid family upbringing that has really supported him throughout that process. . . .  I would say he’s a little bit of an outlier in that sense, so well trained mentally and physically at a young age.”

Stevens also praised Alec Iafallo: “He’s looked like he’s taken his game to another level in all areas. He got stronger, quicker, a little more confident with the puck.” I’ll tell you why in a moment.

The LA team started Iafallo with Kopitar and Kovalchuk; the 70s line (Carter with Pearson and Toffoli); Anderson-Dolan with Andrian Kempe and Trevor Lewis; and Austin Wagner with Michael Amadio and Nate Thompson.

If Austin Wagner is not a familiar name, that’s because he, too, is new. He played in the AHL last year, for the Ontario Reign the Kings’ farm team. His output amounted to ten goals and seven assists in 50 games. He is holding the last forward spot in the place of fellow AHLer Matt Luff, who was the Kings’ other scratch on Sunday night. His highlight moment came in the first period, when he streaked in on the left side with a defenseman edging him out from the right. The D got a stick in the way just as Wagner got his shot off. It was labeled for the inside of the post, but Jonathan Bernier got his blocker on it. Good shot selection, at least.

The first period was with pace, but no scoring. The Kings had a four-minute power play early. The first two minutes, they had three shots on goal. The third minute, the PP stalled. The fourth, no zone setup and no shots.

The Red Wings pressured around the middle of the period, working the shots from a deficit on their behalf to seven to five in their favor. They then had a power play on which they got four shots in the first minute. Then like the Kings, they flagged, and got nothing at all in the second minute of the power play.

The period ended with the shots at 12-10 in Detroit’s favor. Their leader was Gustav Nyquist with three. Dylan Larkin had two blocked. The Wings outhit the Kings 7-4.

Yeah, it’s what you’re thinking—the only real action was on the power plays by either team.

Now that I’ve introduced the idea that there was a visiting team in the building, a few notes on the Red Wings. Their lineup showed two newbies on forward. Michael Rasmussen was on the third line and playing is second game. Christoffer Ehn was in his second game also. He played in the Swedish league prior. He was centering the fourth line.

But their defense was really a bunch of rooks. Each pair had one player in his second-ever NHL contest. This included Dennis Cholowski (with Trevor Daley), Filip Hronek (with Danny DeKeyser), and Libor Sulak (with Nick Jensen).

Period two began with an LA flurry and shortly saw an LA goal, a portent, fans hope, of what is to come this year, because of how it happened.

Kovalchuk took the puck over the blueline, then did a spin move attempt at a deke. It didn’t quite work to free him, but he spotted Kopitar coming down the slot, and dished to him. Kopitar went down the right side of the slot, deking and faking as he did so. He switched to his backhand as he approached Libor Sulak, who was stationary on one knee (remember that part earlier on here about him being a newbie?). Sulak waved at him as Kopitar rifled a backhand up high over Bernier’s shoulder, in and out of the net quick as a flash. It was almost too fast to see.

The period saw the only fight of the night, between Jake Muzzin and Nick Jensen, about five minutes in. This was retaliation for a hit. There seems to be more of that this year, at least in the early going. This one wasn’t the disgusting mismatch that some others have been around the league.

The Red Wings tied the game on the power play, a shot from the right side wall that oddly went in far side, just barely inside the post. It probably happened because the puck was tipped, by Kopitar kind of from behind as the scorer (Mantha) shot, and by Phaneuf as it went past him.

The teams then traded minors, Jeff Carter negating a Kings’ power play seven seconds after it started with a high sticking minor.

Detroit could have broken the tie their way when Andreas Athanasiou stole a puck as it slid along the blueline with the Wings shorthanded. He broke in alone on goal, but instead of taking a shot, he shoveled the puck wide into the corner, almost as if he were trying to do so. Looked funny from above, anyway. Meanwhile, Doughty was lying in a heap in front of his own bench. When he realized he’d given up on the play, he got up. The puck was into the corner by the time he got back.

With just under five minutes left, the shots were decidedly for the Red Wings: 24-15. Truth be told, none were particularly dangerous. Neither Campbell nor Bernier had been tested all that hard.

The Kings pulled ahead by a goal late in the frame, when Tyler Toffoli kept the puck along the right boards and shoved it to Paul LaDue as he came down the wall. LaDue, head up all the way, skated toward the goal line, shooting as he got close. There was no inch of space to be seen. Was he trying to put it off the pads? Nobody was in front for the rebound, but they didn’t need to be. The puck sneaked in past Bernier, either five-hole or under the pads. Bad goal. 2-1 Kings.

Period three saw the Kings outscore the Wings 2-1 to make the whole affair 4-2. The last was into an empty net. Iafallo scored it. But he also got one that was again, credit to Kovalchuk. The latter went around the net while the Detroit goalie and defense cleared a puck around to nobody. Kovalchuk picked it up, thank you very much, and backhand dished it through the slot right onto Iafallo’s stick. He threw it into a largely open side of the net.

Campbell held on with some fantastic saves. He credited the guys who cleared the rebounds in front of him. He summarized his night: “I knew the guys were going to come out and play hard for me. They always do. They played hard for sixty minutes, and it’s great to get a win. It’s big for the team.”

“Detroit does a really good job of hitting that late guy, or that backside guy, but everybody did a great job of getting in lanes. I could name everybody who had blocks. [Muzzin] had a couple near the end of the game that were huge, and [Doughty].

He said that his grandfather was a huge Detroit fan, but he’s sure he’s a Kings fan now.

IH. asked him about the feel of this year’s smaller equipment. “At first, I like smaller gear, so I didn’t mind it, but it definitely is smaller, like it hugs around your arms pretty tight. By now, though, it’s all broken in, so it feels good.”

The Kings now go out for an East road trip, playing Winnipeg, Montreal, Ottawa, and Toronto. Might as well get that over with early, and before the bad weather comes on.

Detroit heads down the I-5 to Anaheim, where they play the Ducks in the Anaheim home opener Monday evening. That’s a rivalry that goes back to the playoffs of the years when the Wings were in the West.