In 2018, the hockey programs in Storrs, CT, and Amherst, MA, sat in similar spots. Both the Massachusetts Minutemen and Connecticut Huskies had lacked for recent Hockey East success and both were poised for a step forward. In the 2017-18 season, both programs played in the Hockey East Quarterfinals. It was UConn’s first trip there in their brief tenure in the conference and UMass’s first time there in eleven years. Neither team won a game in the quarterfinal round, but both units appeared ready to take a step forward. The next season, UMass surged into the Frozen Four while UConn took a step backward and missed the conference tournament. Now, three years later UMass is the defending Hockey East and National Champion while UConn is playing for their first Hockey East Tournament crown and NCAA Tournament appearance.

UMass is bound for the NCAA Tournament no matter what the result of Saturday’s game while UConn must win to each their first ever NCAA Tournament. That combined with Head Coach Mike Cavanaugh’s leadership makes UConn possibly the most dangerous possible opponent for Greg Carvel’s squad to face in their conference title defense.

After beating Northeastern, Cavanaugh explained an important piece of his coaching. He showed his team a video of Mark Messier’s arrival to the New York Rangers and how the long serving Rangers players were afraid to discuss the goal of winning a Stanley Cup. Messier made it a point to discuss the goal of winning the Cup and Cavanaugh has carried that attitude into the Huskies’ locker room.

His squad is paced offensively by 6’5” center and Nashville Predators draft pick Jachym Kondelik (12-21-33) and Minnesota Wild draft pick Vladislav Firstov (10-11-21). Those two team with Yale graduate student transfer Kevin O’Neil (6-10-16) for one of Hockey East’s best scoring lines. Captain Carter Turnbull (11-4-15) provides a scoring potential and physicality that surprises considering his 5’8” frame. Defensemen Roman Kinal (4-4-8) and Harrison Rees (3-10-13) both scored against Northeastern and along with Arizona State transfer Jarrod Gourley (3-4-7) provide a physical presence on the back end. 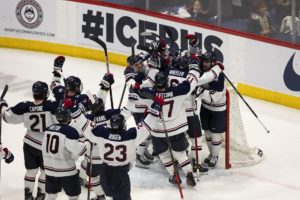 UConn’s driving force in the playoffs has been Union College transfer goalie Darion Hanson (20-14-0/ 2.29/.921). The East Bethel, MN native has stopped 62 of 64 shots faced in the two playoff games so far for a .969 save percentage in the Huskies’s first two playoff games. He’ll have to stand tall again to get UConn to a championship.

As is traditional on Greg Carvel coached teams, the blue line drives much of the pressure. Half of this year’s defense corps are NHL draft picks. Freshman Hurricanes prospect Scott Morrow (13-20-33) leads the corps in scoring while fellow freshman and Nashville Predators prospect Ryan Ufko (5-24-29) isn’t trailing far behind. Junior and St. Louis Blues prospect Matthew Kessel (6-11-17) provides more pop. The steadying presence of the blue line is seniors Ty Farmer (1-8-9) and Colin Felix (2-7-9). Felix in particular has drawn rave reviews from Coach Carvel. “All Colin Felix does is play in championship games,” he said of his defender after beating UMass Lowell in the Hockey East Semi-Finals.

The oldest and most veteran player on the Minutemen anchors the most important position. Matt Murray is UMass’s all time leader in wins and backstopped UMass to a Frozen Four win over Minnesota-Duluth last season. He’s stopped 67 of 70 shots across the first two playoff games, including a 45 save performance against Providence in the Hockey East Quarterfinals. He’s got something to prove as Filip Lindberg won the National Championship game and all four NCAA Regional games between the 2019 and 2021 tournaments. Still, Murray’s got a remarkable resume and will be regarded as a critical figure in UMass’s revival. A win in Boston will only improve that legend in Amherst.

All-in-all, this is a pretty even matchup. UMass is a more talented and experienced team, particularly on the blue line. Murray’s resume outstretches Hanson’s in net but as far as recent play, that’s a dead heat. Bobby Trivigno is the most talented scorer on the ice but UMass will have a hard tie finding a physical matchup in its forward line against Kondelik. Carvel and Cavanaugh have coached against each other for years and both will have their teams prepared to play.

UMass is the favorite to win this matchup but UConn is un afraid to face them, and thus probably the most challenging matchup the Minutemen could have drawn.

Puck drop at TD Garden is at 7 PM. Both fan bases will make a good showing in Boston for what should be an excellent hockey game.