After a season filled with hype, covid-concern, drama, and fantastic finishes, four teams remain to compete for a National Championship. All four hail from western schools and travel to Boston for a shot at final glory in the 2021-22 college hockey season. Let’s preview the matchups.

The Wolverines and Pioneers bring a combined 44 Frozen Four appearances and 17 National Championships for what might be the most decorated Frozen Four matchup in the sport’s history. And both teams boast enough talent to hang another banner at their respective homes.

Michigan is the favorite for good reason. The Wolverine ice 12 NHL draft picks, including seven first round picks and four of the 2021 draft’s top five picks, including the top two. And through the Big Ten Tournament and the Allentown Region, so far so good for the loaded talent. 2021’s top overall pick Owen Power (32GP- 3G/29A/32PTS) notched five points in the two games played in Allentown. He is as advertised as a passer and skater, and the most talented total package collegiate defenseman since Cale Makar. And he is not the leading blue line Michigan scorer. That honor goes to the fourth Wolverine taken in the 2021 NHL draft and the fifth overall pick, New Jersey Devis draft prospect Luke Hughes (40GP- 17G/22A/39PTS). Captain Nick Blankenburg (37GP- 14G/15A/29PTS) and Vancouver Canucks draft pick Jacob Truscott (39GP- 2G/17A/19PTS) fill out the scoring punch on the blue line and add a defensive awareness that this team needs. It’s the most skilled defensive core in the country and a weapon rarely seen in this level of the sport.

Michigan’s blue line drives the offense but there’s no lack of offensive punch up front. Hingham, MA, native and Seattle Kraken draft prospect Matty Beniers (36GP-20G/23A/43PTS) leads the Wolverines in total scoring and is second in goal scoring behind Vegas Golden Knights’ draft pick Brendan Brisson (37GP-21G/21A/42PTS). Brisson is the leading goal scorer of all players in Boston this weekend. Sandy Hook, CT, native and Florida Panthers draft pick Mackie Samoskevich (39GP- 10G/19A/29PTS) and Boston Bruins draft prospect Johnny Beecher (33GP- 6G/9A/15PTS) fill out the remarkable depth on offer and give New England hockey fans a reason to cheer for Michigan in the absence of more local rooting interests. These scorers give Michigan the second best power play in the country (27%) and the best of the Frozen Four teams.

And Michigan doesn’t lack for good goaltending either. Buffalo Sabres draft pick Erik Portillo (41GP-2.13GAA/.926SV%) has owned the net all season with good results. He won the Allentown Region’s most outstanding player award by backstopping Michigan through their tightest moments and bailing out a young team that has played young at points. His 6’6” frame allows him to slide across the crease more easily than most goalies and he offers a steadying presence for Mel Pearson’s unit. 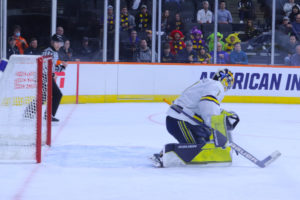 There is reason for serious concern. Michigan’s last three third periods have been pathetic. American International College threatened late in their matchup. Minnesota made the Big Ten Championship Game a one goal game late in the third period. And Quinnipiac went from down 4-0 to start the final period of the regional final to threatening to tie it with about five minutes left. Mel Pearson’s unit must close better in order to claim their first National Championship since Marty Turco skated the trophy in Boston in 1998.

Also of concern, Michigan is by far the worst faceoff team (50%) of the four Boston bound units and they allow the most shots per game (29 per game) of the Frozen Four teams. Combine their weaknesses in defensive zone coverage and details with a mature and physically skilled team, and Michigan will have problems. The Denver Pioneers fit that description. 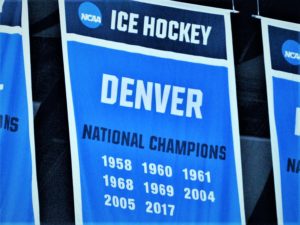 The biggest question for Denver is in net. Magnus Chrona (35GP-2.16/.909SV%) has the lowest save percentage of the remaining starters, but has posted a .939 save percentage through five postseason games and has given up no more than two goals in those games. Michigan will be a different task though.

Denver hasn’t faced an attack as potent as Michigan’s this postseason. Lowell and Minnesota-Duluth are more defensive oriented teams ranking in the middle of the pack offensively. Michigan is a miles more talented offensive team, particularly through their blue line, than their previous postseason matchups.

David Carle’s unit is net older and more experienced while Mel Pearson’s pack is faster and more skilled. Both teams provide a good matchup for the other and offer things the other lacks.

Prediction: Michigan 4-3. I do not feel strongly about this prediction. If any team is equipped to exploit Michigan’s weaknesses in closing games and defensive awareness, it is Denver. But the Pioneers have yet to matchup with a blue line as fast and potent as Michigan’s. I’m taking the Wolverines on their overwhelming talent but I wouldn’t be surprised to see Denver earn the win.

These rivals from the state of hockey met in last season’s NCAA Tournament in Loveland with Mankato winning 4-0 to earn a spot in their first ever Frozen Four at the Division I level. Now, the Mavericks and Gophers meet in their highest stakes matchup of all time almost 1,500 miles away from home.

The Mavericks have authored the best season in program history, with a program record 37 wins and the second Frozen Four trip in program history. And much of the cast is the same from last year’s unit. Most importantly for the Mavs is their backstop: Hobey and Richter Award finalist Dryden McKay (41GP-1.28GAA/.934SV%). The man named for legendary Cornell and Montreal goaltender Ken Dryden has almost everything on his resume except for a National Championship. He won the Albany Region’s Most Outstanding Player award with a shutout of Notre Dame to secure a spot in Boston. His 37 wins are the most for a single season in college hockey history. The Downers Grove, Il, boasts the highest save percentage of any goalie left standing, and walks into Boston with a chance to bring Mankato its first Division I National Championship. 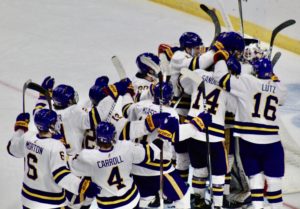 And Mankato offers a potent offense to help their backstop. In fact, Minnesota-State has the second best scoring offense across the whole season (4.1 Goals per Game). Nathan Smith (36GP- 19G/31A/50PTS) is the country’s second leading scorer and the only player to score in the 1-0 win over Notre Dame and is the Maverick’s only draft pick, his rights belonging to the Arizona Coyotes. Julian Napravnik (37GP- 18G/31A/49PTS) and Cade Borchardt (41GP- 15G/25A/40PTS) form a top line with Smith that can match any in the country for pure production. Ryan Sandelin (39GP- 21G/12A/33PTS) is the leading goal scorer and offers needed scoring punch on the second line. Reggie Lutz (35GP- 14G/13A/27PTS) and Michigan transfer Josh Groll (37GP- 4G/7A/11PTS) fill out the scoring depth and help defend on the best penalty kill left standing.

Mankato’s story is goaltending and defense with an honest offense led by 2022 Spencer Penrose winner Mike Hastings, his third win as the National Coach of the Year. They’ve got a quality test in the flagship program from their home state: the Minnesota Golden Gophers.

Bob Motzko leads his team to the first Gopher Frozen Four since 2014 and his second career Frozen Four, after leading St. Cloud to the 2013 dance. He coaches the nation’s fourth highest scoring offense (3.6 Goals per Game) and somehow the lowest producing offense of the Boston bound programs.

The biggest revelation is in net. Justin Close (22GP/18Starts- 1.83GAA/.929SV%) took over the net after Jack LaFontaine signed a professional contract with the Carolina Hurricanes mid-season and hasn’t looked back. He posted an overtime win over the reigning National Champion UMass Minutemen and a 24 save shutout against the Western Michigan Broncos to get the Gophers to Boston.

The Minnesota schools provide an interesting comparison. Comparative experience on the Mankato side and drafted talent on the Twin Cities side. A long tenured an decorated goaltender versus a new high performing net minder. And a cohesive offensive unit with long term experience playing together versus a younger and faster unit.

Prediction: Minnesota-State Mankato 3-2. Dryden McKay is the best goaltender last standing and he’s got a deep team in front of him. Minnesota is playing well at the right time, but Mankato has been consistent all season and showed against Harvard and Notre Dame that they can win in either a shootout o a defensive affair.

Michigan and Denver play at 5 PM and Minnesota State faces Minnesota at 8:30 at TD Garden. The winners face off on Saturday to determine a National Champion. Welcome to College Hockey’s premier weekend!