The Frozen Four is back in Buffalo for the first time since 2003. Four teams bring a wide array of stories, talents, and experiences to the City of Good Neighbors. Two conferences (Hockey East and the NCHC) produce this year’s participants. All four will compete for college hockey’s crown jewel and only one will walk away victorious. Let’s preview the matchups.

At season’s start, both the Bulldogs and the Friars were favorites to perform well in their conferences and make noise in the NCAA Tournament. Both ultimately did, though with different paths.

Duluth dominated from wire to wire. The reigning National Champions returned the entire blue line, many of the forwards, and their starting goaltender. The veterans claimed their second NCHC Tournament crown and defeated Bowling Green and Quinnipiac in the Midwest Regional to reach their third consecutive Frozen Four.

This program is a modern-day dynasty. Scott Sandelin is the even-handed leader of this operation from behind the bench and has his team ready to go again. Mike Richter nominee Hunter Shephard is back for another kick at the can. The sophomore from Cohasset, MN, led the nation in wins. He’s posted a 6-0 record and a .963 save percentage in six postseason games, including through three overtime periods. He’s playing his best hockey of the season right now. He’s supported by possibly the best blue line in the nation. Last season, five freshmen and a sophomore led the way for a Duluth victory in the defensive core. This year, those same six players have an added year of experience and are ready to do it again. Scott Perunovich led the team in assists. Mikey Anderson, Nick Wolff, Dylan Samberg, Louie Roehl, and Matt Anderson all played their roles to perfection. 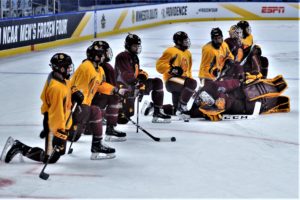 Duluth players take a breather and a knee in practice. Credit: Chris Lynch, Inside Hockey

The forwards lost Karson Kuhlman to graduation, but the remaining players have performed well. Parker MacKay led the team in scoring and was the MVP of the Allentown Regional with both goals against Bowling Green and a third against Quinnipiac. He’s filled the captaincy admirably. Justin Richards followed shortly behind as the second leading scorer and Nick Swaney tied MacKay for the lead in goal scoring, with 15. As a total unit, the Bulldogs ranked 11th in goals per game and 14th in power-play percentage. This team isn’t overwhelming as a scoring force, but they know how to score big goals and play in tournament games.

While Duluth dominated, Providence rode a roller coaster. They finished third in Hockey East but were denied a trip to TD Garden for the Hockey East Semi-Finals. After fearing their season was done, PC squeaked into the tournament as a fourth seed and capitalized on their chance in the Providence Regional. They came back from down 3-0 in the first to beat Minnesota State and demolished Cornell to reach the second Frozen Four in five seasons. Nate Leaman has the Friars mirroring their 2015 edition in story and eager to match that team in results. 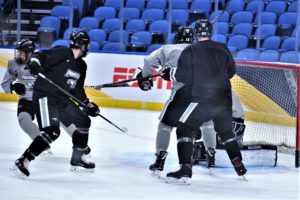 Providence practicing in Buffalo before their Frozen Four matchup with Minnesota-Duluth. Credit: Chris Lynch, Inside Hockey

Leading the way is an impressive set of forwards who anchored the ninth-best scoring offense. Josh Wilkins finished tied for eighth nationally in scoring with 45 and top-20 in goal scoring with a team-leading 19. He’s followed by three 30 point scorers in Jack Dugan, Brandon Duhaime, and Kasper Bjorqkvist. Scott Conway and Tyce Thompson have also proved valuable pieces to a deep forward unit.

The blue line also has scoring punch. Jacob Bryson, a Buffalo Sabres draft pick, is a fun two-way player to watch and has show-stealing potential. Vincent Desharnais and Spenser Young also have offensive skill and heavy pace while Michael Callahan and Ben Mirageas round out the blue line with a total of four NHL draft picks.

In net, Hayden Hawkey sports the best name in the sport and among the best resumes. He’s claimed the PC records for wins and shutouts. He enters Buffalo 19th in Save percentage and hasn’t allowed a goal in 109:52 of total ice time.

Prediction: These teams are dead even. They’re comparable within one or two positions in almost every statistical category. Both can hit, both can dictate the pace with size or skill, both have strong goaltending. It’s the hardest game of the season to choose a winner on skillset. The only discernable advantage for my money is Duluth’s experience. Because of that, I’m picking the Bulldogs to edge the Friars in a classic and play in their third consecutive National Championship game; the first program to hit that milestone since the late 2006-2008 Boston College Eagles.

This season’s best story faces one of the best programs college hockey has to offer.

UMass has authored a magnificent season behind the recently voted Penrose winner, Head Coach Greg Carvel, and a cadre of talented players skating inspiredly and battling for one of college hockey’s downtrodden programs. The Minutemen won their first Hockey East Regular Season crown ever, reached their first Hockey East Semi-Final and NCAA Tournament since 2007, and dominated Harvard and Notre Dame en route to their first Frozen Four in program history.

Leading the class is the Hobey Baker favorite, Cale Makar. The sophomore from Calgary, Alberta, tied for the national lead among defensemen scoring and third nationally with Harvard’s Adam Fox. In addition to his offensive skills, Makar found chances to show his defensive ability, including on a backcheck to stymie the Crimson in the NCAA Tournament. 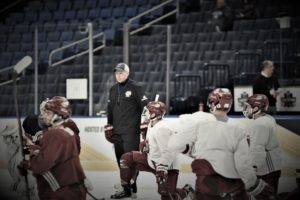 Makar is the favorite for the Hobey Baker and an admitted favorite part of the season for Carvel, but UMass is no one man band. Mario Ferraro, Ty Farmer, and Marc Del Gaizo fill out a potent blue line that posted the nation’s sixth-best goals against average. All are versatile puck movers and hitters. They join forwards like Jacob Pritchard, Mitchell Chaffee, and John Leonard who led the Minutemen to the nation’s third-best offense and second-best power play. Brett Boeing and Kurt Keats help round out a complete unit and give a physical presence up front.

The only question is who takes the net. Both Matt Murray and Filip Lindberg are quality options. Murray got the majority of the starts in the regular season, winning his first eleven decisions. He faltered against UNH to open the playoffs, and Lindberg has been excellent since taking over, recording three shutouts in four starts.

The Minutemen’s opponent boasts one of the sport’s longest resumes. Denver has eight National Championships including a recent win in 2017. This is the third trip to the Frozen Four in four seasons for the Pioneers. But this is the first without Jim Montgomery leading from the bench. Twenty-nine-year-old rookie Head Coach David Carle performed admirably to lead DU to another NCHC Semi-Final and a pair of shutouts over Ohio State and American International College in the Western Regional.

The anchor for the nation’s seventh-best defensive performance, a statistical tie with UMass, has been the tandem of Devin Cooley and Filip Larsson in net. Cooley took the early year starts. Larsson had the net for the NCAA Regional and has not allowed a goal in 139 minutes of ice time. The two are third and fourth respectively in save percentage nationally. 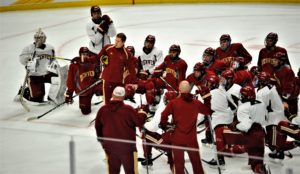 In front of the net, a young but talented defensive core plays important minutes. Slava Demin, Ian Mitchell, and Griffin Mendel are all underclassmen tasked with stymieing the top gunners on the opposition. They join with championship veterans Michael Davies and Lester Lancaster to form an imposing group.

The forward lines balance the youth and experience nicely as well. Jarid Lukosevicious, the MVP of the 2017 Frozen Four courtesy of his Title Game Hat Trick, led the Pioneers in goal scoring with 19, good for second in the NCHC and top-20 nationally. Liam Finlay and Tyson McLellan are both also veterans with scoring in Finlay’s case and toughness in McLellan’s case. The Pioneers also boast some high skill youth. Calgary Flame draft pick Emilio Petterson led the team in assists and Cole Guttman and Brett Stapley round out the major forward pieces. This unit only posted the nation’s 28th best scoring output and the 48th best power play, but they can score when they need to.

Prediction: Denver has to get the first goal to win and Larsson has to play a dominant game. The special teams battle heavily favors UMass as does a track meet. The Minutemen can also win via defensive domination. For the multitude of paths to victory, I’m picking UMass to play for their first National Championship.