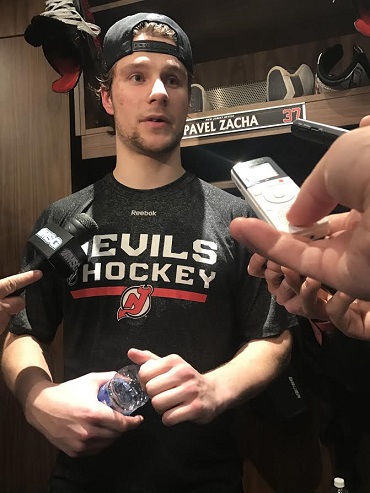 Zacha tallied a goal and an assist in the Devils 2-1 win over Buffalo at home on Monday.

NEWARK–Pavel Zacha’s third period goal helped lift the Devils to a much-needed home victory over the Sabres on Monday, 2-1.

After falling in overtime and missing out on a point less than four days ago, the Devils returned home looking to end a 7-game losing skid at the Prudential Center. While the Rock had been a source of strength in the opening months of the season (starting 8-0-2), the latest trend saw them go 2-8-2. With 17 of their final 28 games at home, any continuation of the new norm would all but certainly seal a fifth-straight postseason miss.

New Jersey fired 10 shots on goal in the opening period, but each was answered by Buffalo’s Robin Lehner, who made 37 saves in the loss. Meanwhile, Joseph Blandisi, playing in his third game since being recalled was again active in the emotion of the game, fighting Nicolas Deslauriers 6:39 into the first.

More bad blood boiled over 7:32 into the second when Ben Lovejoy’s high-stick resulted in a scrum and two roughing penalties to Buffalo’s Evander Kane. New Jersey made quick use of the man-advantage as Adam Henrique, on his 27th birthday, tallied the opening goal at 8:46 from Mike Cammalleri and Zacha, part of his two-point performance. Though they scored just once, the Devils fired 19 shots on goal in the second.

Trailing by a goal, Sabres’ Tyler Ennis used his speed and skating to create a nifty spin-o-rama move to beat Cory Schneider 8:39 into the third and even the game up at a goal apiece.

After Justin Falk and Kane took back-to-back penalties, the Devils power play eventually pulled through at 12:33 when Zacha found a rebound off a Cammalleri shot.

Buffalo pulled Lehner with 1:30 remaining in regulation, but thanks in part to Travis Zajac, who went 79 percent on faceoffs, including key wins on three-straight icing’s in the final 55 seconds of the third, New Jersey hung on for the win.

“We definitely got the result we wanted,” Hynes said following the team’s second-straight victory and fourth win in their last three. “I thought that we played hard. Our compete level and our grittiness in general was very good. We found a way to get to the net and find some gritty  scoring. Those were some things we felt we needed to get better at.”

Another factor that earned praise from the coach was their power play, which went 3-5 in the prior two games and continued to produce on Monday, going 2-4.

“To the player’s credit, I think they bought into and understand that the power play is about attacking. They’re getting shots to the blue paint, they have accuracy on the shots, they’re creating second and third chances.”

Zacha, who scored the game-winning goal in the third period, had just 7 points in his first 37 games this season. In the 9 games since, he’s already added 7 points, including two on Monday versus Buffalo.

“When you play more and more games, you’re more confident,” Zacha said. “As a line, we’ve started playing much better.

Zacha admitted it was tough on him when the team suffered multiple losing streaks. Now, along with Stefan Noesen and Jacob Josefson have become a legitimate, productive third line.

“He’s competing–his skating is a factor, he has more touches, he’s harder on the puck and you see, he’s using his shot more,” Hynes said about Zacha. “He’s just a lot harder player than he was earlier in the year.”

Goaltender Cory Schneider made his fourth-straight start, stopping 22 of Buffalo’s 23 shots. It was the kind of effort you’d expect from Schneider, who has had some struggles this season.

“I always try and play at a certain level and play consistent,” he said. “I think the hallmark of my career is consistency. It’s something I take pride in. It’s a mindset you have to get into.”

Schneider and the Devils will return to action on Sunday, Feb. 12 to face off against the defending Western Conference champion, San Jose Sharks, part of a five-game home stand. But first, the team will have its mandated bye-week–an amendment made to the current Collective Bargaining Agreement this season. The team will not be permitted to hold team practices during the five-day practice period, though they can practice on Saturday after 4 p.m.