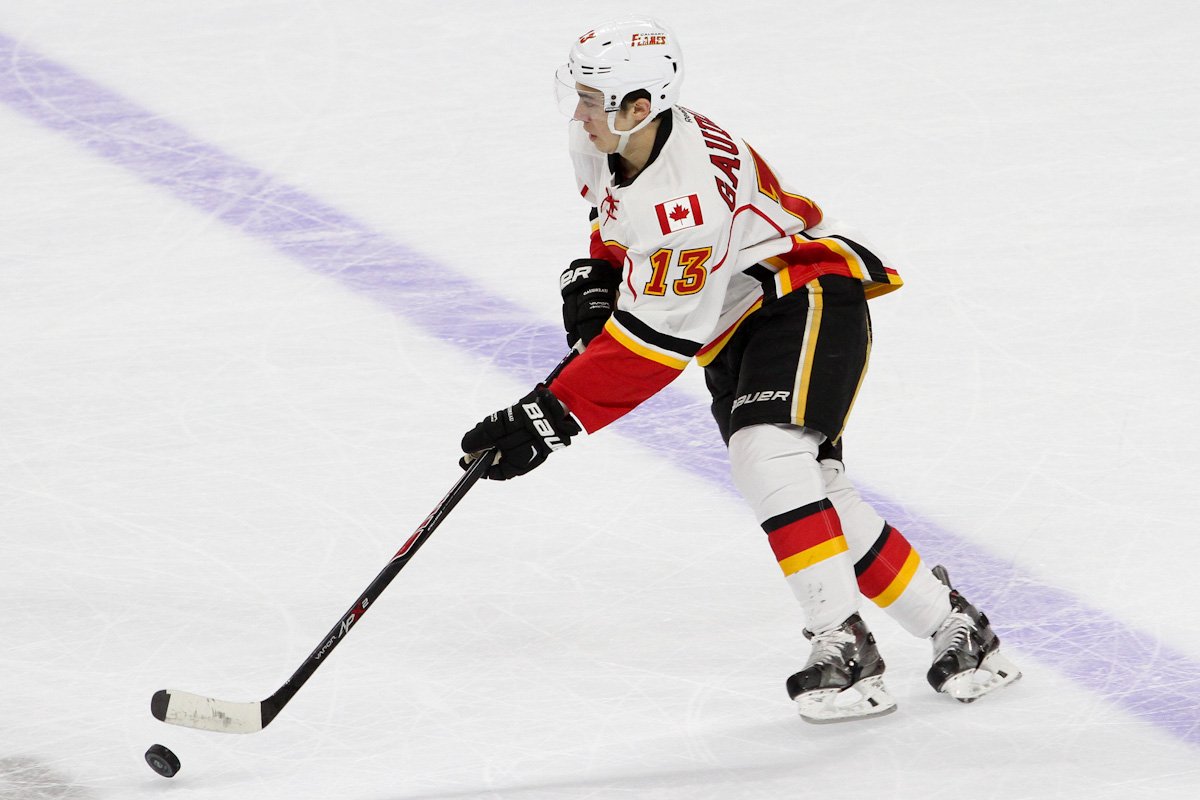 “You can’t win here!” Say that in a singsong chant, and you have the sentiments of the fans at Honda Center in Anaheim plus what it felt like to be amongst them Thursday night wrapped up into one. They were taunting the Calgary Flames—both fans and players—who were in the midst of dropping yet another game to the Ducks in California, their 28th in a row.

Hard to believe, and the streak was born when some of the players on the ice were just kids, but that’s the facts. But the Flames can’t just not “win here” against this team. In fact, they can’t win much of anywhere. The season series between the two squads comprised five games, four of which the Ducks won.

That might lead you to think that this series will be a walkover, and in fact, there were people in the press box Thursday night saying that it would be like Ducks-Jets in 2016, which was a brilliant and tough series but won 4-0 by Anaheim. The question is, does the loser of such a series learn anything? Do they even hold the memory close, when in theory they were in it all along, but which in hindsight looks like they had no chance?

A further comparison suggests itself—to this year’s Edmonton Oilers, at least as they appeared in game one of their tilt with the San Jose Sharks. They played a good early game on Wednesday, then gradually dropped off in production while the Sharks just kept coming on.

But the Flames are no Oilers, and I mean that in the very best way. Before the series, looking distantly North from Anaheim, it seemed as if the better of those two teams was the one in Edmonton. They might still prove to be. But now what one sees is a good bunch of young players led by a brilliant young superstar, but power that’s just not reigned in yet. They’re stallions (though Calgary is where the Stampede is), but that energy needs to be contained, at least insofar as it needs to be distributed evenly, rather than bolting out of the gate and then exhausting itself.

The Flames, perhaps not as brilliant (yes, I meant that pun—it’s a good one), are more consistent and steady while still being plenty skilled.
They proved it against the Ducks in Game One by surviving an early goal. Fifty-two seconds early. The building had by this time settled down into its seats, their orange towels stowed (I don’t think they’d been given their souvenir orange t-shirts yet, but I’m not that careful an observer of such things and thus don’t mind being corrected on the matter). They were, it must be said, primed for that, “You can’t win here” chant, having used it just a week ago when the Flames were in town. And all that early power play goal can have done is confirmed their suspicions.

But the Flames came right back, getting a man advantage of their own when Kase took a slashing penalty. (Don’t charge it, or the ensuing goal, to him. Had he not slashed Michael Frolik, the latter would have scored, as he was skating the puck across the crease uncontested at the time.) They potted a goal at the 35-second mark of their power play, a bit lucky as it went off a Ducks’ defenseman’s stick and right onto that of Sean Monahan, but the passing they’d done off the faceoff was commendable and made the goal a deserving one.

So it was 1-1 with less than ten minutes gone, and the Flames weren’t done. A period later, midway through the second, they got another. That goal was off a puck that went behind the Ducks’ net one way and came out the other in a “V” pattern. Kris Versteeg threw it across the crease, and Sam Bennett put it into the net. It was only the team’s 15th shot, to 21 for the Ducks. (That margin would be almost the same ratio that the game would eventually end on, 41 Ducks and 32 Flames.)

The Ducks tied it on the most horrendous line change I’ve ever seen. Five guys all went to the Calgary bench all at the same time, completely leaving alone the Anaheim players.

Imagine what Brian Elliott must have been thinking when he looked up and saw three Ducks players, free and clear, storming in on him. One Calgary defender did manage to get back, kinda-sorta, to disrupt, but the puck went from Getzlaf to Rakell and was slammed home. This goal, unlike the other two, did not have help in the form of an assist from Shea Theodore.

Carlyle of the Ducks would later say that you always want to leave one guy out on the wing as a safety man in this situation, but that it’s understandable that guys feel like they should get off the ice when they’re tired.
Just not all of them at once, and that was the crusher on this play.

The last Ducks’ goal, the winner, might not have been the best one. It came off a Silfverberg try as he took a puck from Eaves. Silfverberg came off the wall, set up as he went to the net, and blasted a rising wrister past the goalie. Michael Stone was turning and going down on a knee to block as the shot got to him and probably got a piece of the puck as it fluttered to the net through him.

It would stand as the winner, a 3-2 game for the Ducks after being ahead, behind, and then surging.

No scoring in period three didn’t mean no excitement. John Gibson, modest and yet more chatty than usual after the game, made several glowing saves, including one right near the end of the game off Johnny Gaudreau, who worked his was across the crease, went inside-out with the puck to try to put it past the goalie’s leg, and then got an extra poke after that. Gibson had to hold the leg out, toe stretched, strong, to keep the little fellow from making it 3-3.

Gaudreau was credited with two shots on the night. It should have been three. Gibson said, “At the end when you’re down, you’re just going to throw pucks at the net and try to get people there, and the guys did a good job blocking out in front of me.”

But that wasn’t what was asked. What about Gaudreau’s chance(s)? “I missed catching it, so I had to get a leg on it. It’s true,” he said when the surrounding crowd started to laugh. He repeated the story when a late questioner came into the scrum.

This chance, by the way, came with 17.2 seconds to go, and the crowd in the crease might well have ended up scoring.

Gibson agreed that his game was strong in the third period, though, “I don’t think personally that it was my best.” If he gets better, then the Flames could be in trouble.

This chance was just after 5-on-3 power play, mind you—in the last three minutes of the game. What? Well, the referees have been calling-em-all in every game, and this was not an exception. With 3:07 left, Kesler took an interference penalty. Then, with the referee standing right nearby, Shaw high-sticked a player going through the crease. No contest. The Ducks were down two guys. They would get a further penalty with a second to go when Kesler, as my press colleague said in his question to Calgary Coach Gulutzan, “tried to hatch the puck.” Joel Bergman of the Fischler Report, the question-asker, pointed out that in the last two minutes of a game, such a delay of game infraction (Kesler sitting on the puck) can lead to a penalty shot. This one was definitely one you could make a case for—it happened in the slot right in front of the net.

All the Flames got, instead, was a one-second power play. Obviously, it wasn’t enough.

So they lost. And maybe in the end, they won’t win here. But the team has every reason to hope that things will turn around in the series. For one thing, their skilled players are incredibly skilled. How many times did Gaudreau get behind the player defending him? More than a handful.

How good were they? Good enough to win if you subtract the mistakes. But that’s the thing, isn’t it? At this time of the year, mistakes are magnified. And teams just get better and better as they go along.

Hence Getzlaf’s statement after the contest: “We’re going to have to get better in little areas, but we found a way to win tonight.”

He further complimented his old buddy, Corey Perry, for his tough play in the early part of the game (Perry was on a line with Vermette and Ondrej Kase) and summarized, “Oh yeah, we’re going to have to earn everything. That’s a great hockey team over there . . . . It’s only home ice if you use it.”

I was on NHL Network Radio this morning, and I was asked what the Flames had to do to adjust their way to victory. Good question. They need to limit mistakes. How you do that when youth and enthusiasm—even to do the right thing, like get off the ice when you’re tired—gets in the way might just be the question that will determine who moves on from this series.