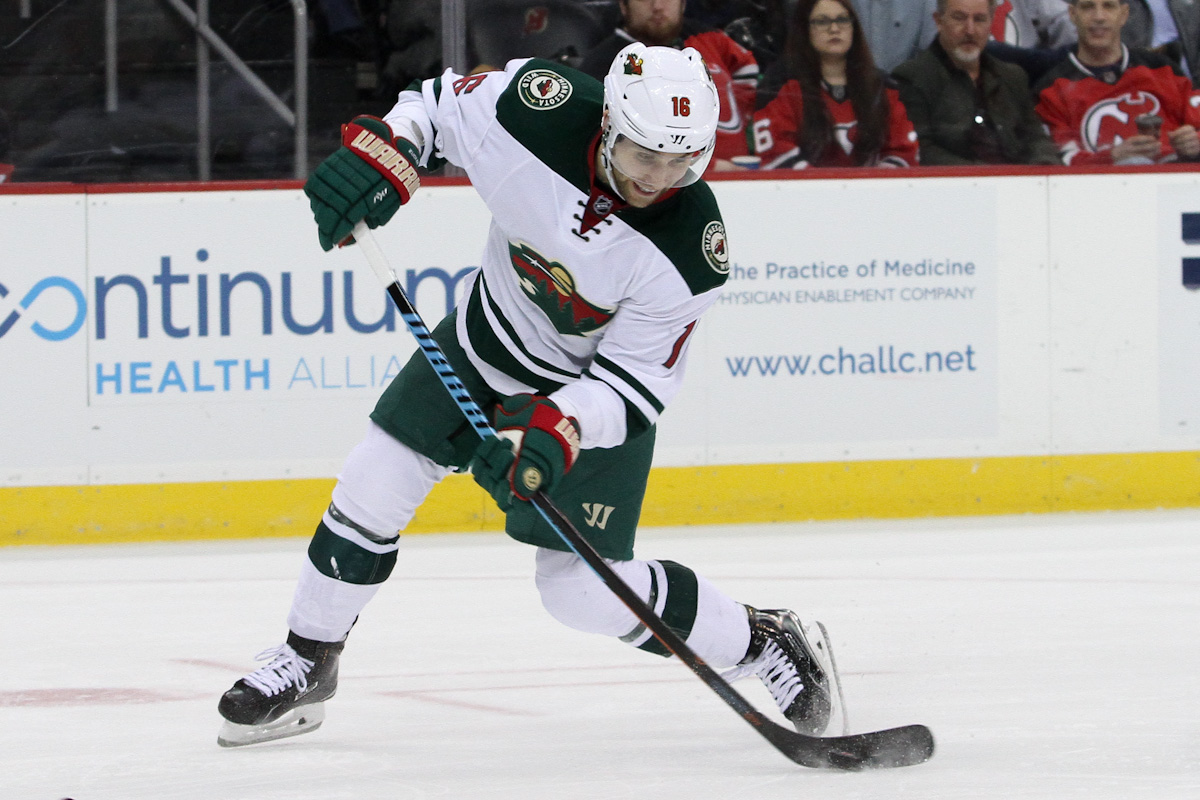 You’d think Bruce Boudreau won a Cup in Anaheim, so many stories were written about his return to SoCal this week with the Minnesota Wild. They all can be condensed to roughly the same thing: having lost four game sevens in a row, he got canned. He may or may not have been on the outs during parts of his final season last year. But he is thankful that his old boss, Bob Murray, let him go so fast after the end of the season, because it allowed him to be snatched up while the hiring frenzy for coaches was going on. He was just nine days in the unemployment line.

So how does he feel coming back? Nostalgic. Like he wants to know how things are going. Like he’s pretty concerned with the little things, including, as he said after the Kings’ game on Saturday, “What kind of a meal they’re going to have in the press room. That’s very important.”

With the kind of money he’s getting paid, he could likely afford to eat anywhere he wants to, including in the region’s priciest joints. Heck, he might even be able to afford a place at Teemu Selane’s steakhouse, if he could get a table. That might be tricky, though, since if you recall, Selanne wasn’t entirely happy with his coach during the final playoff series he competed in. He didn’t think he was getting enough icetime.

“Ah, Mr. Boudreau, we have a fine table for you. You’ll be right next to the bathroom for easy access.”

Actually, I’d be willing to bet that the Finnish Flash would be nothing but gracious. But that’s all speculation. What’s real is that the Wild had been on a pretty good streak coming into their West Coast swing. They recently had a franchise-best 12-game winning streak. They followed that up with a loss, and win, and then OT in LA.

In fact, their single point on Saturday made their first half the best in club history to this point, a fact which was singularly unimpressive to Boudreau, who said on Saturday, “I’d rather have had the second point.”

Under Boudreau, the Wild have felt more free and creative than under previous coach Mike Yeo. And they feel more supported, according to what players have said in the media this week. But they didn’t look good Saturday, and if you read my report, you’ll find out why, because Zach Parise was great in diagnosing the point. Essentially it boiled down to the fact that the Kings are a hard team to play, and they are big and grind you down.

What was their excuse against the Ducks, then? They’d had a day to think it over. And the Ducks came in with their best player, more or less, Ryan Getzlaf, out of the lineup. Their second best, if you take reputation as the factor, Perry, is on a miserable streak where he has scored just once in the last 12 games. Twelve games ago, in fact. Other than that, it’s just four assists in those games.

With his buddy out, he’s playing with Cramarossa and Rakell. The former is in his first NHL season. Rakell has 23 points in 30 games coming into Sunday. But neither scoring, experience, nor inexperience matters, because this line is dead. They don’t check. They don’t possess the puck. And they don’t generate much.

Witness their SAT numbers: of the team’s 52, they had 11. So that’s about one-fifth. Not great. But Cramarossa had nothing—no shots, blocks, or misses. And of the 11, Perry’s four misses were almost one-third. Further, of the 11, just three were shots. And that’s one-eighth of the team’s final shot total of 24. Corsi it up and down. They’re not producing much, except misses. Puck possession yeah, but you’re not going to score like this.

Neither did the team itself after getting out to a 1-0 lead in period one versus Minnesota. In the second, the Wild outshot the Ducks 16-6 and outscored them by two goals to go up 2-1. For you Corsi types, the SAT stat showed Minnesota doubling up Anaheim, pretty nearly, at 53-27 by the end of two. It would eventually be 68-52. So a little more even.

The only glimmer of hope for the Ducks, who by the way are nine points ahead of the spot they were a year ago (after which they went on a huge run to make the playoffs) was the Kesler line: he, Silfverberg, and Cogliano. They scored the first goal, and they continued to press. They had five of the team’s 13 shots in P2, but more than that, they seemed the only group able to penetrate the Wild zone and keep a hold on the puck. By the end, their SAT was 11, so the same as Perry’s line. But they looked far more dangerous, got many more pucks in deep, and had to be considered more of a threat by the Minnesota defense.

While no Ducks scored in period two, Cogliano forced Minnesota into a penalty by carrying the puck across the crease and shooting it despite being tripped. But on the ensuing power play, the Ducks were the victims of a two-on-one, and they never did get properly set up in the zone. Weird considering the team has the third-best power play at home in the league, and the fourth-best overall.

Their penalty killing, by the way, is not nearly so good—17th overall in the league, 16th at home. Perhaps that accounts for the second goal of the Wild being while Anaheim was shorthanded. On the other hand, that was 5-on-3, so perhaps a goal against was not entirely unexpected. The shot came from the high, high slot. So did the one that scored the second goal, by the way.

Period three saw the Ducks perk up some, registering 11 shots. Trouble was, the Wild notched 12. Neither team scored, and one moment perhaps more than any other was symbolic of what happened, or didn’t happen.

With about a minute to go, Perry got the puck on the left side, a backside play with everyone focused right. He didn’t shoot, but instead passed it toward the right low edge of the crease. Vermette was there and the crease crowded, so it could have been a good chance, only Vermette didn’t get a handle on the puck. Why didn’t Perry shoot, though? The puck had come to him slightly out of his wheelhouse, and it took him just a second to get a stick on it. In that moment, a defenseman filled the spot on the left side of the net with the goalie towards the center of the cage.

Then again, this is the kind of shot a player should take, and maybe Perry’s bad puck luck is creating a cycle of timidity which is driving him even more into the dark.

On the other hand, the Ducks had at least two chances that looked like sure goals but were saved. One was a slam shot on the power play from right in front of the goalie. The other was a Perry wrister that came as he carried the puck in on the left side before launch. It went wide.

The Ducks thus endured a frustrating end, coming close but not getting the equalizer in a game that, honestly, they didn’t deserve to win.

Coach Boudreau of the Wild commented on his team’s PP after the game, saying, “It’s really good. We’re getting a goal a game on it, and if we continue to do that, the confidence will soar, and we’ll start to get two a game. When your power play . . . is doing well, it seems like the rest of the game picks up.”

He also said that he thought that, “For the first two periods, we played the defensive game that we like to play and didn’t allow them a lot. We got back to moving our legs, so it was good.” He also said, “I truly believe that since we were scoring a lot of goals, we were starting to cheat for the offense, rather than doing the job and letting everything else take care of itself.”
Zach Parise said essentially the same thing in the locker room just before, albeit with a slight shift to crediting the defense for the team’s offense: “They’re so mobile, we have to use them on the offense.”

He also indicated that the ice in Anaheim was much better than that in LA, and that this made his team’s game quite different. “It was a different game. I felt like yesterday’s game was way more on the boards. I think a lot of it had to do with the ice conditions, to be honest. The ice here was really good. But I thought yesterday it was so bad it was banging on the wall the whole time. They’re a good team on the wall, so it just had a different feel to it.”

The Wild have just taken five of six points against the feared California triumvirate. Boudreau didn’t quite say it, but he almost said that this section of the team’s schedule, which had them against San Jose, LA, and Anaheim, and then has them playing Montreal at home, and Dallas and Chicago on the road, was make-or-break for the season. He has now accomplished almost all he could, and certainly all he could reasonably hope for, in the first half of this challenging part of the schedule.

Parise said, “Coming out, these three teams is always a tough trip. They’re not easy games, but I don’t think anyone was worried about how we were going to respond.”

Respond they did, and they leave a Ducks team facing what might look like a relatively easy two of the next three: after facing Dallas on Tuesday at home, they have road games versus Colorado and Arizona. Five of six points, as the team from Minnesota just took against the Cali teams, would be entirely possible here.

The two combatting teams of Sunday next meet in Minnesota on January 21st. The Ducks better bring a sweater. It’s deep freeze time up there.

Boudreau said that he had a number of visits from people he’d known when in Anaheim, “All good people,” he indicted, “So it was really good.”

Gretzky has a new book. I also have a book on Gretzky. Facing Wayne Gretzky. It’s available Kindle, too. Check Amazon, please.