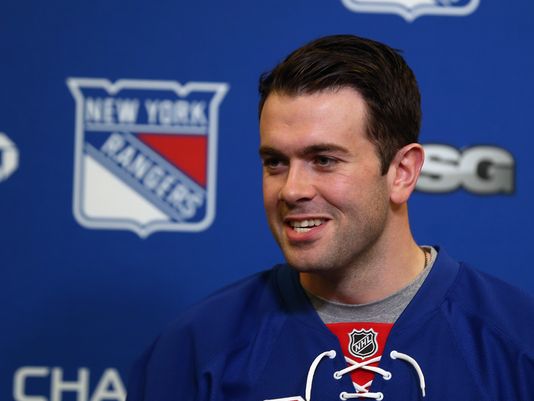 NEW YORK – A bouncy-house at your four-year-old’s birthday party is hardly the place to find out you’re about to move halfway across the country.

That’s the situation new Rangers defenseman Keith Yandle found himself in Sunday afternoon, when Coyotes general manager Don Maloney called him with news of the blockbuster trade that sent shockwaves through the entire National Hockey League.

“The Rangers made it easy on me,” Yandle said of his whirlwind 24 hours. “They got me here ready to play. Made it a lot easier than it could’ve been. My job is to play on the ice, they took care of everything else. They live up to everyone saying how first-class an organization it is. You can tell already.”

The Rangers, who are firmly in win-now mode, gave up 19-year-old prospect Anthony Duclair, defenseman John Moore, and two draft picks to bring in one of the preeminent puck-moving defensemen in the sport. But for the Rangers, gunning for their first Stanley Cup in 21 years, the cost wasn’t a concern.

“I don’t think we’ve given anything away,” said Rangers general manager Glen Sather. “I think the players that we’ve acquired are terrific assets for the team. We got to the [Stanley Cup Final] with the deal we made last year. I can’t predict where we’re going to end up this year, but I certainly think this guy’s a great player. He’s going to help us a lot.”

Yandle had all his skills on display Monday night in the Rangers’ dominating 4-1 win over the league-leading Predators. He skated 19:41, making quick, solid decisions in the offensive zone while helping the Rangers move through the neutral zone at warp speed.

“I think we needed a little bit more of a real good, solid puck-moving defenseman that’s going to be useful on the power play,” Sather said. “When he became available, that’s when I jumped at it.”

“I just got to play my game,” Yandle told a throng of reporters during his introductory press conference on Monday afternoon. “These guys are a heck of a team, they know how to win games. I’m just here to help out and do what I can to help them keep doing it.”

As news of the trade filtered through the Rangers players Sunday evening, it elicited a large amount of excitement among the group that came within three razor-close games of winning the Cup last June against the Los Angeles Kings.

“It’s the great thing about what we’ve done here before the trade deadline,” said Rangers captain Ryan McDonagh. “We set ourselves up for hopefully making the playoffs, and going into the playoffs hoping to do some damage and make something special out of it. It’s great to see management want to improve our team that way.”

“It’s a real strong vote of confidence for our players that we feel we’ve got a team that can compete for the Cup,” said Rangers coach Alain Vigneault. “I loved [Duclair]. He was a great young prospect, but to get a quality player, sometimes you have to give up a lot.

The Rangers also added versatile forward James Sheppard from the Sharks, while sending winger Lee Stempniak to the Jets in order to make the salary cap work. Sheppard, who served as third-line center with the Sharks, can play any of the three forward positions.

“One of the reasons we picked him up is that he’s a versatile player, he can play all three positions up-front,” Vigneault said. “The fact Kevin Hayes and J.T. [Miller] had very limited experience in the middle, we wanted to make sure we had some added depth there.”

“I’m glad it worked out,” Vigneault said. “He’s a young player that is only in his first couple full years in the NHL. Very competitive player, highly-skilled, that I think is only going to get better. Very happy we’ve got him locked up for the next four years.”

“I’m really happy. I’m with all my friends, and feels like we’re a family here. I had a good night’s sleep,” Zuccarello said after the game in the Rangers locker room. “We get the two points, I get to stay here four more years. This day couldn’t be much better.”