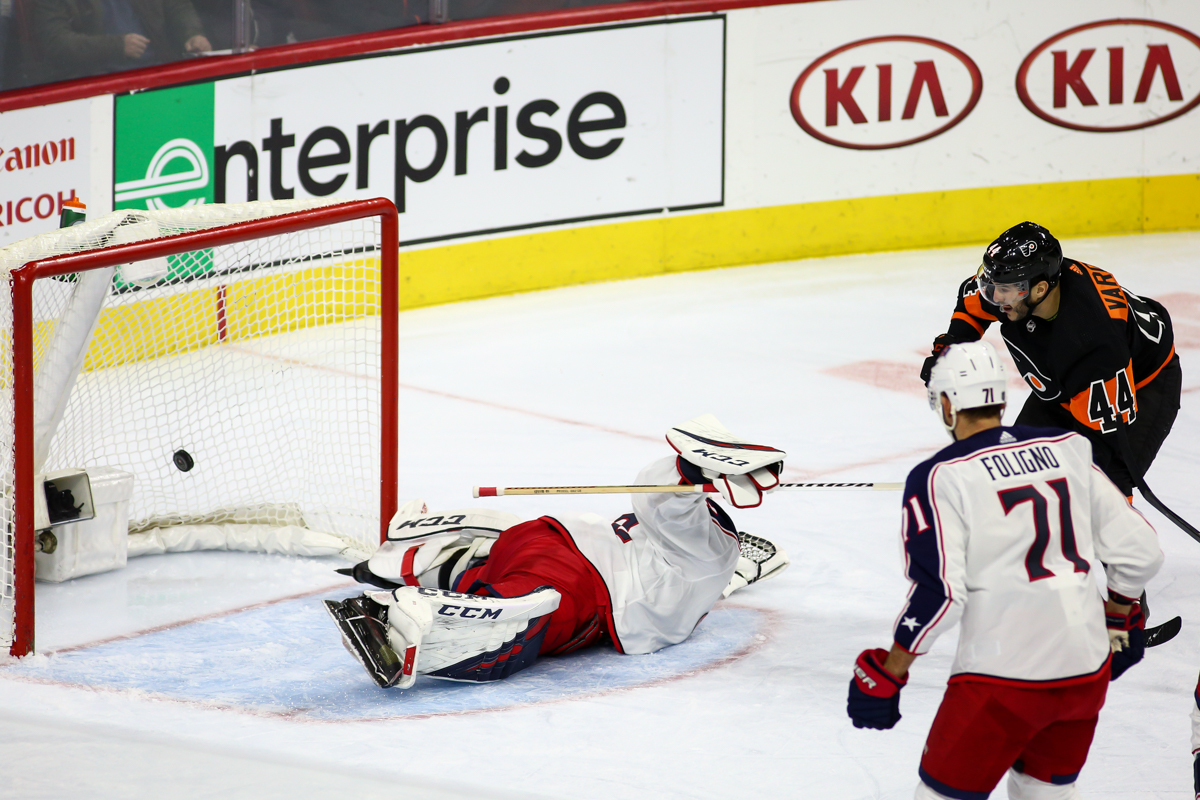 Would Bob Test the Waters?

NEWARK–Last July, John Tavares made a monumental decision to test the waters and ultimately depart his former team via free agency. It marked the first time in the cap era that a player of his caliber made it to open market and opted to sign away from the only place he’d known as an NHL player where he was the face of the franchise.

Sergei Bobrovsky could be poised to do the same. The 30-year-old goaltender, who ever since being traded to Columbus from Philadelphia in 2012, has become not only their unquestionable number-one netminder, he’s also become the franchise’s backbone. But there’s been no reported progress on a deal to retain the pending UFA goalie and longer that goes on, the greater chance he’ll test things out. Add Sunday’s 39-save shutout performance against the Devils as a snapshot into how he can sure up a team’s net.

Sunday’s win was made even more impressive by the circumstances–‘Bob’ making his second start in as many games after a 34-save performance in Philadelphia less than 24 hours prior.

His club exhibited the signs of a team that wasn’t as fresh and might have had the upcoming three-day holiday break in mind. A stale first period got weird, as the Blue Jackets tallied two goals on three shots in the first period–Cam Atkinson at 4:03 and Oliver Bjorkstrand at 5:31.

The Devils finally sustained some pressure in the second, but Columbus answered that with a burst of speed and partial break for Artemi Panarin and a goal 10:47 in. New Jersey would fire another 19 shots in the third–outshooting the Blue Jackets 39-20 overall, but the netminder hung on to victory.

“It’s just play by the moment, one shot at a time,” Bobrovsky said following the game. “It’s very important to not satisfy (with success up to now) about that. You have a couple days break to rest your body, spend time with family and get ready to work. There’s another period of time coming that’s huge for us.

“There is no time to be satisfied.”

Bobrovsky is eying a fifth 30-win campaign in his career. But knows what’s ahead in the future–more games and hopefully, a postseason run the likes of which the organization has yet to see since its inception. He’ll be a big part of that when and if it comes to fruition. That remains to be seen, but what’s no secret is how his teammates feel about No. 72.

“He got even more tested today,” said captain, Nick Foligno. “Man, he made some great saves. What he means to this team is obvious. When he’s playing like that, it just boosts everybody.”

“He gives us a lot of confidence and keeps us calm on the bench,” said Cam Atkinson. “We expect him to make those saves. It’s amazing what that does for the morale and for the group on the ice, on the bench. He picks us up when we need him.”

The boost the goalie, one of the best in the game today, has provided comes from a rather simplistic mindset. Focus on what’s in front of you. He didn’t care to analyze his play prior or look ahead either. He truly is taking it save by save. A calm approach that might already be music to some hopeful GM’s ears.

“You just play by the moment, you focus on the right here right now and do your best and do your thing,” he said. “The guys did a great job too boxing them out and allowed me to see the puck. It was a fun night.”

Bobrovsky has twice won the Vezina, last winning in 2016-17, he’s also finished with a save percentage of .918 or better in all but one season since being acquired by the Blue Jackets.

There would be no shortage of teams interested in his services, many of which might see the acquisition as the final piece in becoming regular contenders. If he does, it’ll be a giant hole to fit for Columbus, who may also be in danger of losing Panarin to unrestricted free agency. For now they’ll have no choice but to take things day-by-day, or as some might say, save-by-save.