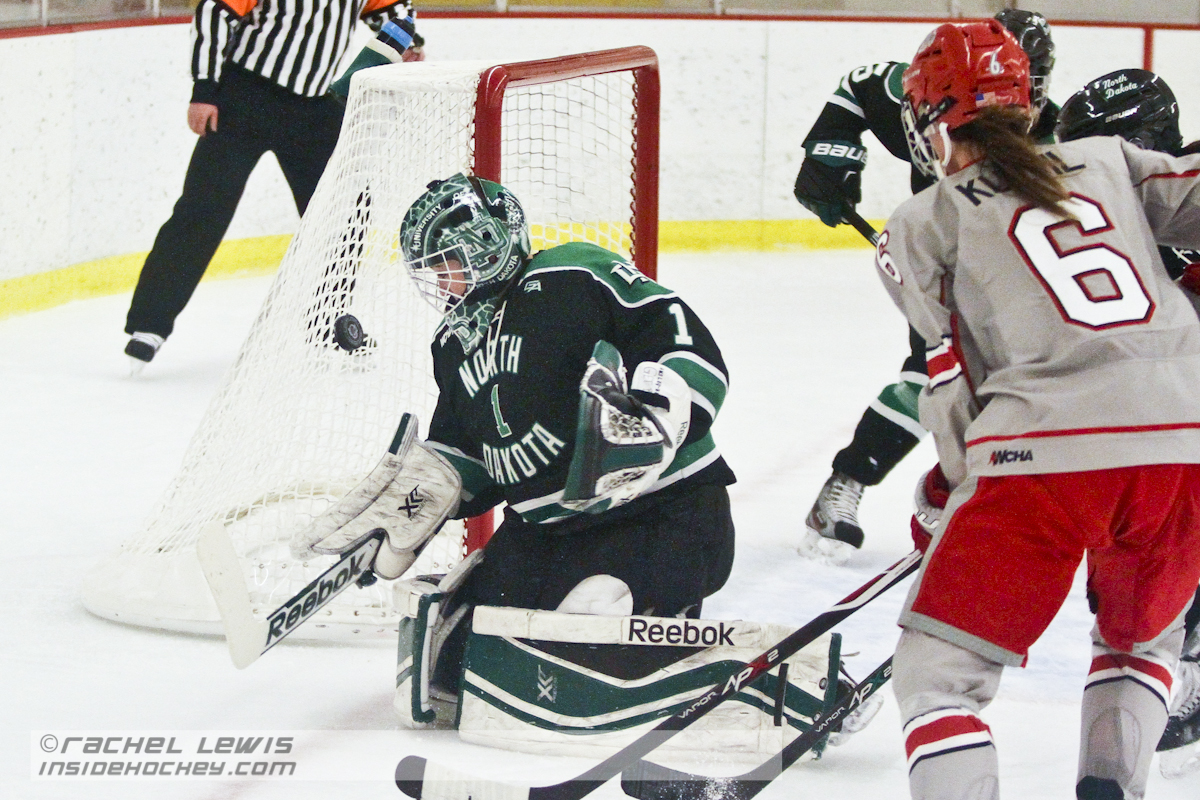 Shelby Amsley-Benzie (UND - 1) makes a save against Danielle Gagne (not pictured).

On November 15, 2014, the University of North Dakota Women’s team was swept by the Bemidji State Beavers. UND’s record was 4-7-1 and they were sinking in the WCHA Standings.

“For the hole we dug ourselves, absolutely we put ourselves in a pretty good situation,” head coach Brian Idalski said. “We need to finish the regular season well here and really focus on St. Cloud next weekend.”

If UND can sweep the rest of their regular season games, there’s a very good chance they finish third in the WCHA standings. Not many people thought this was possible back in November.

That being said, I wouldn’t count them out, they’re ready to prove everyone wrong. This group is also playing for each other  and they seem to be on the same page.

Yesterday against Minnesota, UND looked good early in the game. As the game progress, I thought the Gophers wore down UND with their depth.

After UND’s display this weekend, I think they proved that they can hang with an elite team like the Gophers. Especially, in a one and done tourney.

“They played a good game,” senior forward Tori Williams said. “I don’t think we came out with the energy and intensity that we did yesterday.  I give them credit, they came out strong today.  That’s not how we wanted to outcome to be, but that’s hockey.”

Student athlete of the night is Tori Williams! This The Pas native is fluent in French and chirping

1. ) UND junior goaltender Shelby Amsley-Benzie is playing out of her mind right now. I know it sounds like a broken record, but Amsley-Benzie played outstandingly all weekend long. You could argue that she kept the game close on Saturday when the Gophers were pressing.  Amsley-Benzie stopped 42-of-45 shots in the loss to the Gophers.

With Amsley-Benzie in net, UND has a big time stopper. If don’t believe me, all you have to do is look at the statistics which speak for themselves (12-6-3, 1.37 GAA, .950 SV%). Amsley-Benzie leads the nation in save percentage, and she’s fifth in goals against average.

On conference level, Amsley-Benzie is ranked first in save percentage and third in goals against average.

2.) I like to refer to the UND’s first line as “the Big Line” Becca Kohler, Meghan Dufault and Amy Menke. They led the way for UND this past weekend. They gave the Gophers defense fits and the shorthanded goal by Amy Menke was changed the complexity of game one. That was also the first shorthanded goal that the Gophers had given up all season.

3.) Senior forwards Andrea Dalen and Josefine Jakobsen were a factor all weekend long. I was impressed with these two forwards play in all three zones of the ice. They don’t cheat or take short cuts. They go to the hard areas and they’re good on pucks. Also, Jakobsen has heck of a shot, and she gets the puck off quickly.  Both players have an edge to them.