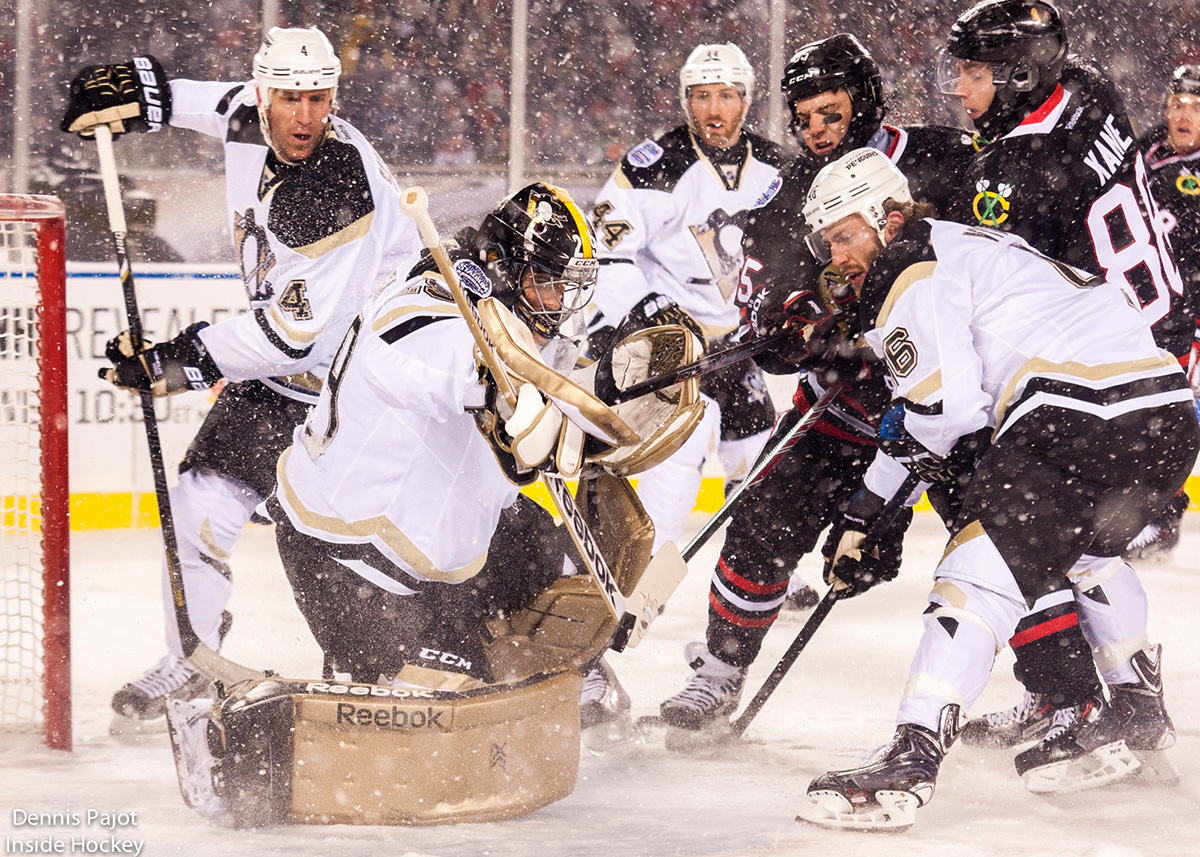 With Two Shutouts in Three Games, Fleury Off to Strong Start

Marc-Andre Fleury is in a tough position. Regardless of what he does during the NHL’s regular season, Pittsburgh’s 29-year-old netminder won’t be judged until spring, where the burden to deliver a second Stanley Cup championship has been squarely on his shoulders for the past five years.

The Penguins’ – and Fleury’s – failure to achieve that goal since 2009 is no small part of why the team is letting him ride out the last year of his contract, as they wait to see how he responds in his 10th season as their franchise goalie and how the market is shaping up for his services.

Right now, though, the regular season is all there is to judge, and Fleury’s is off to a very good start. With all six of the Penguins’ wins to his credit, he’s tied for second in that category, with a 2.13 goals-against average and .926 save percentage in eight games played.

All Fleury has done over the past three games is go 3-0 with two shutouts – one handing the surprising Nashville Predators their first regulation loss of the year, the other coming over the defending Stanley Cup-champion Los Angeles Kings. That’s the first time he’s posted two shutouts in a three-game span since early 2007, and – with the exception of a shaky start against New Jersey Tuesday that ended in an 8-3 Penguins win – he’s looked impressive doing it, with a 1.00 goals-against and .962 save percentage in those contests.

So, although the Penguins brought in veteran backup Thomas Greiss this summer to shoulder a percentage of the workload, he’s gotten just one start so far. And, with Fleury playing the way he is, Saturday’s contest against the struggling Buffalo Sabres won’t see Greiss get another opportunity just yet.

“Going into this week, we sort of went game-to-game [regarding goaltender assignments],” said head coach Mike Johnston. “I thought Fleury looked really good, looked like he was in a zone, and we’re going to go with him.”

For Fleury, that zone has coincided with a pretty good stretch by the team in front of him, particularly on special teams. After a rough start to the season, the penalty kill has now thwarted 22 consecutive opponent power plays over the last six games. And then there’s their own power play, which has been lethal from the get-go. Pittsburgh has scored 15 times in 38 opportunities with the man-advantage for a 39.5 percent conversion rate – the next-closest team, Arizona, is at 26.5 percent – and recorded multiple power-play goals in six games, double that of any other team.

“The team has just been fun,” Fleury said. “Special teams have been key, and everybody’s helping out blocking shots and not giving too many good scoring chances.”

While the Penguins are helping Fleury by blocking shots, they’re also working to be more mindful of clearing bodies out of the net, as opposed to standing side-by-side to battle their opponents, to give him the opportunity to see – and, consequently, stop – the puck.

“They’re doing a good job of boxing the guy at the right time,” Fleury said. “When you have one guy to look around, it makes it a lot simpler.”

“[The Kings are] a tough team, they get to the net, they’re big bodies, and we don’t want to create double screens,” Johnston said. “But I thought Marc was really in a zone tonight; I thought it was one of his better games. Some nights, he might not get as much action, but tonight he had action, he had tough shots, he had big bodies around the net. They had a couple really good chances at the end of the game, and he just stood solid. He was rock-solid.”

Since joining the Penguins this summer, Johnston has been most impressed by Fleury’s quickness and lateral movement. “He’s one of the best goaltenders in the league as far as being able to handle shots on the right side that go over to the left side,” he said.

The Penguins’ focus on being a puck-possession team also includes their netminder, and that’s an area where Fleury will have opportunities to make improvements this year.

“I think, overall, his puckhandling is starting to improve,” Johnston said. “And I like the decisions he makes because it takes hits away from our defense. We want him to handle the puck, we want him to handle it at the right time, make good decisions with it. And I think, the more he gets comfortable with the options we’re giving him, he’ll be better at it.”

That’s all focused on helping the Penguins win games, of course. But, if improved puckhandling finally results in Fleury getting his elusive empty-net goal – he tried again Thursday in the waning seconds against the Kings – he wouldn’t mind that, either.

“Oh, geez; at some point I’ll get one,” he groaned, his often-present grin firmly in place. “Someday it’ll come, I think.”