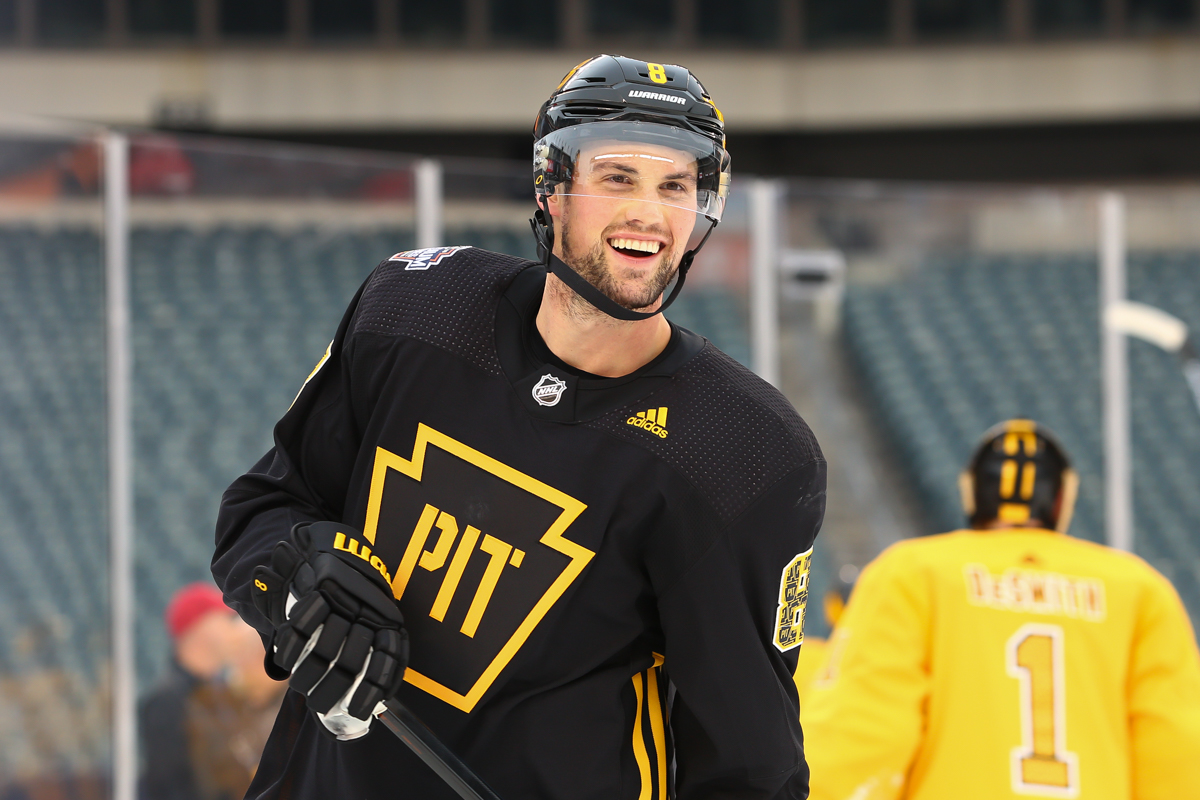 With Top D Pair Out, Penguins Add Depth at Deadline

If the Penguins’ Stadium Series appearance Saturday in Philadelphia had turned out differently, perhaps GM Jim Rutherford would have taken a different approach to Monday’s NHL trade deadline.

As it was, in the course of a few seconds late in the first period of the rainy outdoor contest at Lincoln Financial Field, Rutherford had lost both members of his top defensive pair. First, Brian Dumoulin went down to a concussion on a hit from Wayne Simmonds.

Dumoulin’s partner Kris Letang took exception to the hit, went after Simmonds and was dropped by Flyers defenseman Shayne Gostisbehere with a wrestling-style takedown that left the Penguins’ All-Star defenseman day-to-day with an upper-body injury. Letang underwent neck surgery for a herniated disc in April 2017.

With second-pair blueliner Olli Maatta already out for at least a month with a separated shoulder, Rutherford’s approach Monday became focused on defensive depth.

He sent Tanner Pearson, acquired from the L.A. Kings earlier this season for Carl Hagelin, back to the Pacific Division, getting 6-foot-5, 217-pound defenseman Erik Gudbranson from the Vancouver Canucks. He then shipped minor-league forward Jean-Sebastien Dea, reacquired from the New Jersey Devils earlier this year, to the Florida Panthers for Chris Wideman, who’s played full NHL seasons with Ottawa but will be assigned to AHL Wilkes-Barre/Scranton for now.

“We obviously have issues on defense with the injuries; I don’t really know what the status is on some of these guys,” Rutherford said. “But, even without the injuries, getting the type of player that Gudbranson is was something that we’ve talked about for a while. He wasn’t available, to my knowledge, until today.

“Wideman’s case, he gives us depth at defense. He’s a smaller guy, a puck-moving guy. He’s played some games in the league, he’s got some experience and he could see some time here at some point, too.”

To say Gubranson’s analytics have been underwhelming would be kind.

But the Penguins GM said he wanted to add some of the kind of toughness he felt could help the Penguins push back in physical games, regardless of what the stats say.

“It might still be the case, but that doesn’t describe why you want certain players,” Rutherford said. “In Erik’s case, he’s a real heart-and-soul guy, he’s a good dressing-room guy, he’s got good character, and he can protect our players. It puts us in a stronger position to push back when we get into more physical games.

Gudbranson will join recent adds Nick Bjugstad, Jared McCann – for whom he was traded from Florida to Vancouver in 2016 – and Marcus Pettersson as the Penguins’ attempts to strengthen their roster for a playoff run.

That’s provided, of course, that they make it in. While going a very average 4-4-2 in its last 10 games, Pittsburgh has slipped just outside of the second Wild Card spot in the Eastern Conference, while teams the Penguins are chasing – like Carolina (8-2 in its last 10) and Columbus (7-3) – keep rolling.

They’ll have a big challenge, and a big opportunity, Tuesday in Columbus, where the Blue Jackets are going for broke this year with a number of high-profile acquisitions at the deadline. How is Rutherford feeling about his club?

“We’re good enough to get in; we’re good enough to take a run,” said the Pittsburgh GM, who celebrated his 70th birthday last week. “We’ve played in stretches at times against the top teams and we’ve played well, but there’s some inconsistencies in our play and we have to have everything going that makes you a good team.

“Our goaltending has to be consistent and strong. We have to get healthy on defense; hopefully we can do that by this weekend. And our forwards have to do what they’re capable of doing. I feel comfortable with this team, but I say that at this time with being a little bit nervous [about] whether we’re going to get in. It’s going to be a battle to the end.”