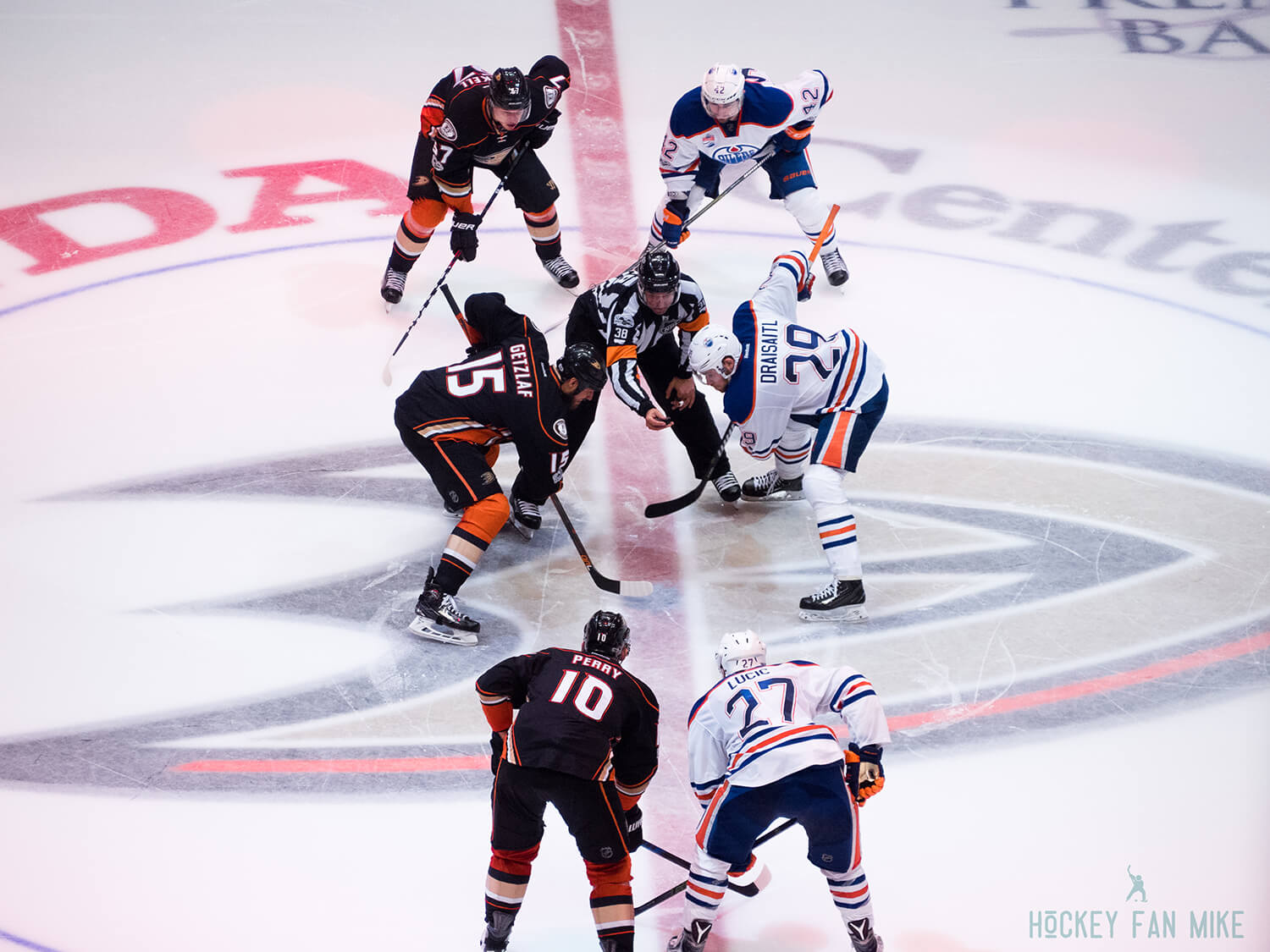 In the end, it wasn’t a bitterly disappointed Edmonton team that spoke to the media after their game seven loss on Wednesday night in Anaheim. It was a group that said the things they might have been expected to, centered mostly around the fact that they are taking this as a lesson that will prepare them for future triumphs.

Except for Milan Lucic. His face was a mask of disappointment, and while he was willing to go over the loss and not hurry out of the room, he was clearly crushed by the 2-1 loss that eliminated his team from the playoffs.

But he and his team will be able to take courage in that if there’s one thing that every NHL fan now knows, it’s that the Oilers are for real. The size, depth, grit, and skill that the team exhibited in taking two games in Anaheim to start things off and then winning one more to force a seventh game suggest, no, scream, that they will be back next year. And maybe for a dozen years after that.

And if there’s one thing that the Ducks team and fans learned, it was that the window that would have slammed shut on this version of their team had they not squeaked out a one-goal win on Wednesday night is now cracking open. It’s ready to allow the sunshine of Nashville in. The series against the Predators begins on Friday, early—the game is at 6pm local time. No sense having the East coast fans miss the whole thing, after all.

How’d the Ducks do it? Well, if you’ve seen the replays, you know it didn’t begin well. Shea Theodore made the kind of mistake that kids in Atom are told never, ever to make—he took the puck needlessly in front of his own net, where he lost it and the Oilers poked it past his goalie.

The first period saw Anaheim chasing the game, and while there was no more scoring, it certainly felt like the home team was headed for another of its famous game-seven collapses. This would have been the fifth in a row. They managed just seven shots to the Oilers’ 13, and for much of it, they were stationary while the Oilers wheeled the puck around them.

There were a couple of dangerous chances, as when Montour got a puck inside the blueline, stepped in a further two steps, and fired a wrister with a crowd collapsing around Talbot. But what one saw watching was that often, pucks that the Ducks would see go in were going over the net, or wide.

Puck (bad) luck? Well, you might call it that. For example, Getzlaf put the puck to Perry in the slot. He double-clutched and shot. No go. The puck went to the net with Kesler’s line on the ice. Kesler himself went to the crease and tried to bat a floater out of the air, waist-high, and in. Nope. In period two, Vatanen put a pass to Silfverberg, who took a shot that would have gone high and in on other nights. It went over the net.

But it was in the middle period that the fourth line, which would end up being quite important in period two (wait a moment for that) started to assert itself.

To end the first, there was a brief moment of hope when Cam Fowler flung a wrist shot past the goalie from the blueline, but it was clearly offside when the puck came to him. A review by the refs was done, but not needed—I could see it from where I was sitting. And that’s a long, long way away.

Period two was altogether different. Carlyle said after the game that it was a grinding shift by his fourth line around the four-minute mark that made a huge difference in the period. That line was Boll, Thompson, and Chris Wagner after Kase had started and Wagner was on line three.

The Ducks had held serve in the first part of the period, killing the last minute of a penalty early, and then they went for it. The highlight of this flurry was when Getzlaf slapped a puck that was saved by Talbot’s leg. But after that, the Ducks slowed down appreciably. Perry barked at the ref about a penalty he thought he should have had. Rakell, playing at that point with Perry and Getzlaf, passed a puck backwards instead of going forwards with it and saw a chance evaporate.

The big break for the Ducks, however, came when they got a goal from a player who has been contributing all over the ice, but not scoring—Andrew Cogliano. He scored as the Ducks came on to make it a solid—really dominating—second period in their favor. By the end, they would have outshot the Oilers by a tally of 16-3, and this was not one of those “it looks better than it is” shots situations. The goal came just short of halfway, at 8:55, when the Ducks crashed and crowded the net. The puck came there, and Montour put it to the crease. Kesler couldn’t sweep it in, but he put it right in front. It hit something and Cogliano knocked it in coming to the net. He would later pull no punches: “We deserved to win this game,” he said in his locker stall after. “It was one of our best games of the season in terms of how we competed.”

But the real difference, the reason there was a goal to the good for the Anaheim side, was a key adjustment that Carlyle made in period three. He put Nick Ritchie up on the first line with Perry and Getzlaf, dropping Rickard Rakell down to play with Vermette and Ondrej Kase, who himself had started the game on line four.

Ritchie, Carlyle said after the game, was placed there because they wanted some size on the line. Apparently the heavy checking of the Oilers, in the persons of Lucic and Draisaitl, had started to wear on the Ducks.

Ritchie’s goal, scored early in the third, came when Vatanen pinched down on the right wall. This was something we’d seen the Ducks D do earlier in the series, but not in this game—both teams were playing a super-conservative game—and certainly not in the game six debacle. Vatanen put the puck to Ritchie, who took a wrister from the right dot and put it into the far side of the net.

He scored with a plug up his nose, the result of an earlier hit. When I talked to him after the game, I could also see traces of other cuts and injuries—the hockey player’s sign of a life well lived.

His goal stood up to win the game for the Ducks, the first game seven victory since 2006. He wasn’t ready to put the goal into larger perspective so quickly as the end of the game, concentrating on talking about the ebbs and flows of the series. “Momentum didn’t carry over from game to game,” he said, “Look at us—Sunday we lose 7-1 and now here tonight it was 2-1.” He said that Carlyle often makes line shifts of the sort that won the team the game. “It’s a good feeling when he does it, and he’s done it a few times a year and it has helped. He doesn’t do it all the time, just when he feels it, and he’s pretty good with that.”

He later commented, “A few guys have been doing all the heavy lifting, so it’s nice that a couple of guys that haven’t scored much could score tonight in me and Cogs. It shows that we have some depth. Big game seven win. We got tested this series. Lots of ups and downs. We were losing the series then winning. It was big.”

The contest featured good last tries by both sides, though no breakaways and few or no odd-man rushes. Ducks chances included Rakell getting a puck dead in front of the net and spinning to shoot. Talbot made a leg save. That was P2. In P3, Montour took a dangerous wrister that Talbot grabbed from mid-air with a flourish.

The Oilers had two great chances late. Nurse threw the puck to the net and Slepyshev redirected it. Gibson made a leg save. Maroon snapped off a low shot and Gibson got a pad on it. The shots would end 30-24 in Anaheim’s favor, approximately the measure of the degree to which the Ducks were better.

And in the end, that was it: the Ducks, on this night, were just a little bit better. Todd McLellan made that point clear in his post-game comments, albeit in part to take the blame off his team for losing: “They were well-prepared, and I think that team has a chance to go on and win. We can beat our team up a little bit, but we’re going to give the other team credit. They played a much better game than they did in Edmonton the other day. I’m not going to sit here and foreclose on our group. I’m going to give them credit because they deserve it.

He also said, “The Oilers learned a lot. . . . I want to talk about our team. We learned a lot throughout the playoffs.” He named McDavid and Draisaitl as he wrapped, “It wasn’t just Connor going to school. It was the organization.” He said “I think in the second round we solidified an identity of a pretty scrappy, resilient, never-die team. There’s still a little bit of inconsistency, but we’ll grow up and fix that. The one question that was answered was that we weren’t afraid of the stage.”

That last part might be the real sign of maturity. The scrappy team stuff—that’s not how you win four series. You win four series by being a mature, disciplined team deep with skill. But the Oilers aren’t too far off that, either.

The window on the West might have closed Wednesday night had the Ducks lost, putting a whole different cast of characters into the spotlight. But it didn’t, and now the Ducks face Nashville. If they want to return to their old days—the sprinkling of magic playoff dust that owner Henry Samueli mentioned the night the team celebrated its tenth anniversary of winning the Stanley Cup had better be more like a smoke cloud.

The last time the Ducks won a game seven, Bryzgalov was in net.

The Predators have allowed just 14 goals thus far in the playoffs, and they’ve scored twice as many.

The Ducks are woeful in both PK and Power Play. That needs to change if they are to beat Nashville.