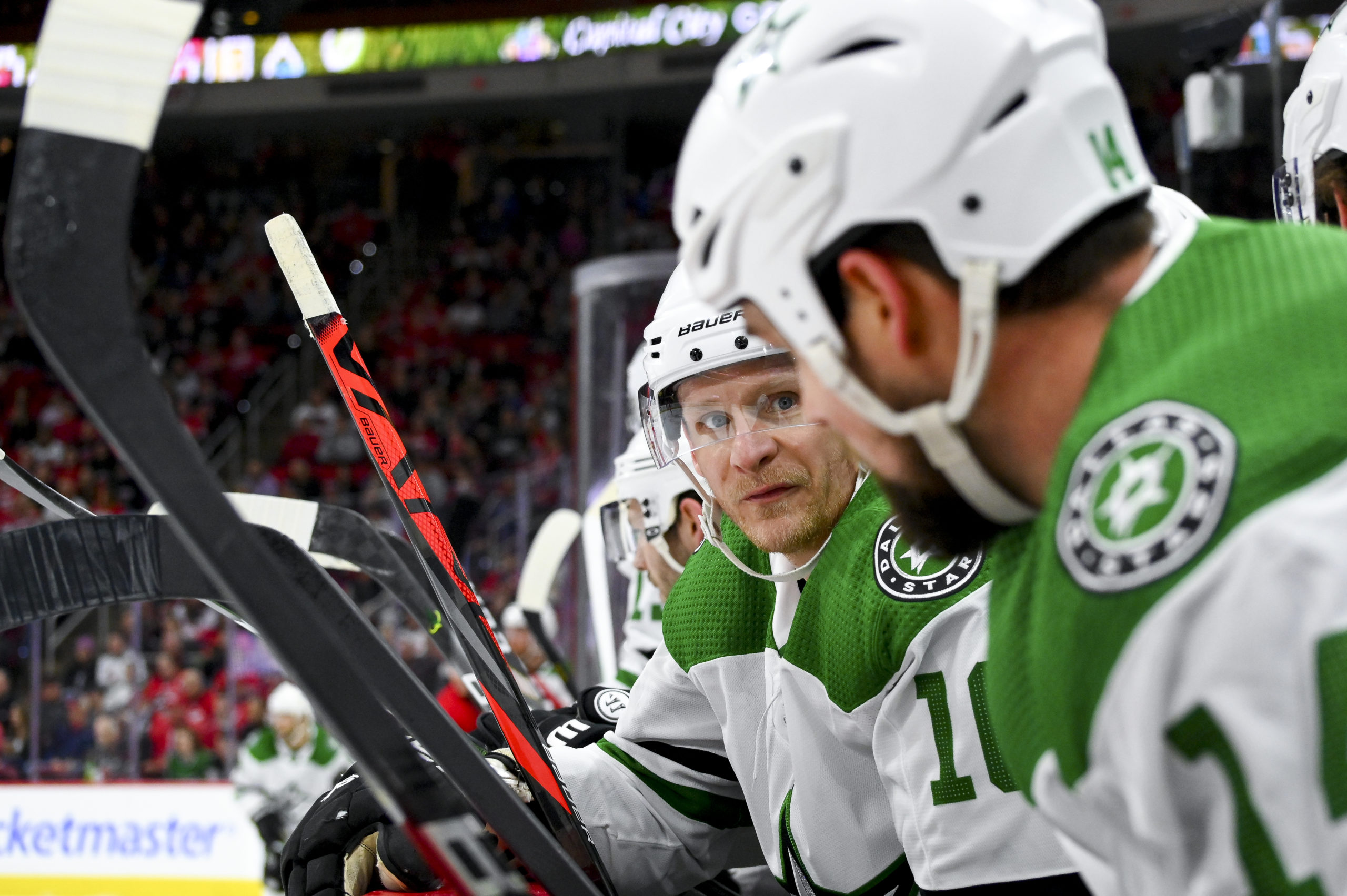 Dallas Stars forwards, Jamie Benn (14) and Corey Perry (10), chat on the bench during a game between the Dallas Stars and the Carolina Hurricanes at PNC Arena in Raleigh, NC, on February 25, 2020.

Will Bowness be back in Dallas?

The 2019-2020 season has been turbulent and outright traumatic for many head coaches as eight organizations fired their team heads through the season suspension.  Many of these head coaches have been very successful in their NHL careers and some firings still have fans scratching their heads as to why their team boss was removed.

In Dallas, the head coaching removal was more of a personal health issue with Jim Montgomery being terminated as the Stars head coach last December.  Jim Montgomery, as it turns out, had issues with of alcoholism and upon his removal in Dallas entered a substance abuse program and at last word is making great progress in his long term health recovery.  While Montgomery has been successful with the Stars,  his own personal agenda should be to recover his health and turn his own personal life around.  NHL teams will come knocking on his door down the road and his record of success with the Stars should translate into success with another team.

As the Stars season was rocked by the removal of Jim Montgomery before Christmas, Stars GM Jim Nill quickly filled the void and named top assistant coach Rick Bowness as the interim head coach.  Bowness is no stranger to the NHL coaching ranks and has moved up and down from assistant to head coach in Winnipeg, Boston, Ottawa, Phoenix and Tampa Bay before coming to the Dallas Stars in 2018.  When Jim Montgomery was released, the Stars were in the first wild card spot in the Western Conference.  During Rick Bowness’ helm in Dallas, after 69 games the Stars sit at 37-24-8 with 82 points and are in third place in the Central Division, meaning that the Stars should have a playoff spot should the current season resume play in the near future.

The question still remains: has Rick Bowness done enough under trying circumstances to earn his place with the Dallas Stars and become the permanent head coach? Bowness is a true defensive-minded coach and the style of play that the Stars exhibit night after night since last December reflects that coaching mentality.  When analyzing the top three teams in each division in terms of goal differentials, only the Calgary Flames have a lower differential with a -5 while the Stars currently register as a +3.  The St. Louis Blues are the current Central Division leaders and their goal differential sits at +32 while the Boston Bruins are leading the NHL with a differential of +53.  What does this mean for the Stars? Under Rick Bowness this team has scraped by with wins and overtime losses to add up points in the standings.  Again, Bowness is well known as a defensive coach but defenses don’t necessarily score enough goals to win games on a regular basis; the Stars will have their work cut out for them should the season re-start and they move into the playoffs against offensive powerhouse teams.

During the NHL trade deadlines last month, the Dallas Stars and its GM Jim Nill made no major roster changes and kept the team essentially intact.  This type of gamble means that Nill and the Stars ownership are willing to bet that a Stars line built around older veterans (twelve current players are 30 years old or older) and being coached by Rick Bowness to grind out game wins will carry them into the playoffs should the season resume.  The only apparent move that Jm Nill did to build up the Stars coaching staff was to move new assistant Derek Laxdal from the AHL Texas Stars up to the big club and help with offense and specifically develop the Stars power play.  Bowness has kept the Stars relevant this season and are legitimate playoff contenders if the season resumed today.

Bowness is also well known for creating a calm, reassuring atmosphere in the locker room and the bench and is very popular with players.  As the Stars roster is filled with older veterans, Bowness’ voice of reassurance could resonate well to finish out this season (if/when it happens) and into the next training camp.  GM Jim Nill needs to set a tone of continuity for the Stars organization and allow Rick Bowness to move forward and become the next permanent head coach in Dallas.