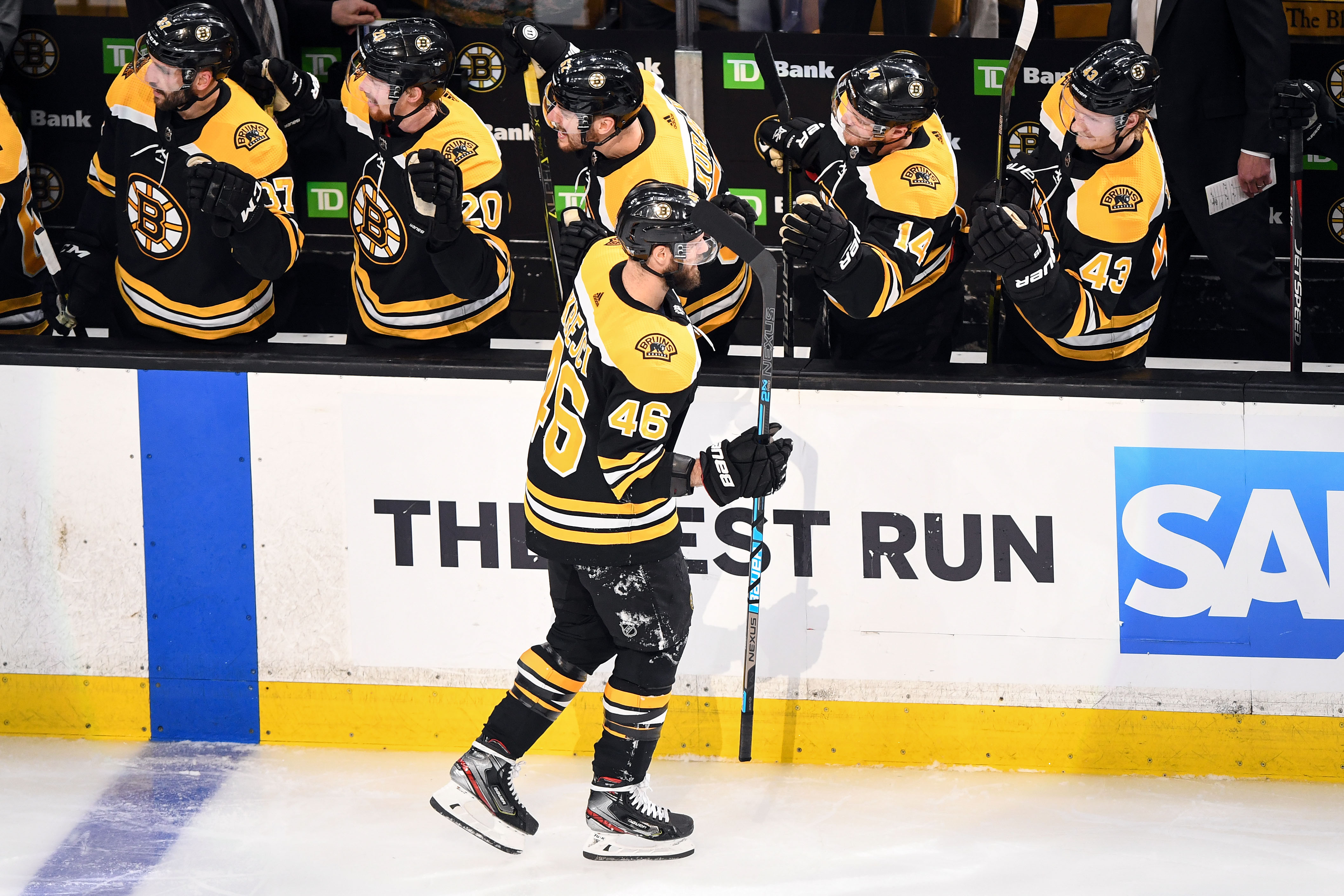 Wild Night at TD Garden for Minnesota and Boston

Boston, MA — For a majority of Saturday night’s game against the Minnesota Wild the Boston Bruins were having one of those nights that teams have in a long NHL season. They were playing well but losing, not getting the calls, the bounces, and just maybe were outworked by the Wild. The Bruins kept the game close, trailing 4-2 with less than two minutes to play before the script was flipped. David Krejci‘s two goals in forty-four seconds tied the game for the Bruins before Torey Krug won it in overtime. Boston came into the game in first place in the Atlantic Division and riding a two-game winning streak. The Wild meanwhile are in last place in the Central Division but were 3-0-1 before Saturday’s puck drop.

Early in the first period, each team had a power play chance. Boston had the first crack at the man advantage just 1:07 into the game when Jared Spurgeon was sent off for Hooking. The Bruins mustered a few long-range shots from the blue line as the Wild penalty kill kept play to the perimeter.

The Wild’s first power play came at 3:55 when Zdeno Chara was whistled for Hooking. The Bruins penalty kill had the best scoring chance of the two minutes as Brad Marchand and Patrice Bergeron threatened Wild goalie Alex Stalock. The St. Paul native easily turned away Bergeron’s shot. At the other end, Zach Parise had a chance down low denied by Tuukka Rask.

Minnesota and Boston were tied for the eighth-best penalty kill coming into the game, at 83.3%.

Krug took a Slashing penalty at 8:46. It was the 5′-9″ defenseman’s first game back from injury after missing the last five. Minnesota won the ensuing face-off in the Bruins zone. A Brad Hunt slapshot from the blue line was saved by Rask but Jason Zucker was all alone out front to bang home the rebound for the 1-0 Wild lead at 8:53. The goal was Zucker’s first of the season.

Brad Marchand and Matt Dumba got into a tussle in the Wild zone after jawing at each other on previous shifts. Each was assessed a two-minute Roughing penalty. During the four-on-four action, Boston’s Charlie McAvoy was called for Tripping at 12:56. Rask made two saves on the Wild four on three. The first on Spurgeon’s snapshot from the top of the circle. Then on a tip by Mikko Koivu at the top of the Bruins crease.

After killing off the McAvoy penalty, the Bruins had a two on zero that had Marchand and McAvoy passing back and forth as they went in on Stalock. As he was driving forward Stalock gloved down McAvoy’s wrist shot out of the air. The first period ended with the wild outshooting the Bruins 15-10, but the Bruins held the slight face-off won edge 14-12.

In the opening minutes of the second period, Boston’s Sean Kuraly set up Joakim Nordstrom for a scoring chance that Stalock stopped. Not much longer after this chance Chara unloaded a snapshot from the blue line that Jake DeBrusk tipped through Stalock’s leg’s tying the game 1-1. The 23-year-old forward’s fourth goal of the season was assisted by Chara and Brett Ritchie, also in his first game back from injury.

Exactly two minutes later at 6:14, Victor Rask had a rebound of a Spurgeon slapshot ricochet off his skate and into the Boston net giving the Wild back a lead at 2-1. The Bruins responded with pressure but were unable to garner solid scoring chances.

Chara would be sent off for four minutes on a High-Stick call after his follow-through caught Zucker’s face drawing blood. On the power play, Eric Staal was alone in front of Rask when he caught a Ryan Suter pass and beat the Bruins keeper high blocker side.

At 17:14 Marchand went to the penalty box for Cross-Checking Jonas Brodin in the offensive zone. After the Bruins killed off that penalty and the clock was ticking down on the second period Krug fired a shot behind the Wild goal that rebound to Marchand on the right side of the goal. Marchand slid the puck past both Suter and Stalock to make it a 3-2 game after two periods. The Bruins outshot the Wild 13-11 for the second.

Minnesota’s Kevin Fiala and Parise were in on a two on one against Krug. Fiala’s pass attempt to Parise was deflected into the Bruins net off of Krug’s stick blade putting the Wild up 4-2 at 5:19.

The Bruins continued to grind despite trailing. A Holding call on the Wild’s Rask at 14:39 helped the Bruins build momentum. Bergeron, at the blue line, sent a cross-ice fed to Marchand, who fired the puck just wide of the Wild goal. David Pastrnak was unable to knock home the puck as he crashed the net at the right side post.

With roughly 2:20 to play in the game, the Bruins pulled Rask for the extra attacker. The Bruins worked the puck around the Wild zone. Marchand from the corner dished to Krug at the blue line, who rifled a pass to Pastrnak at the left dot. Pastrnak one-timed the puck to DeBrusk at the top of the crease for a chance that Stalock stopped. The rebound went to Bergeron, in front, who deftly slid the puck to Krejci on his right. Krejci easily tapped the puck into the Wild net making it a one-goal game at 18:09.

At 18:29 Luke Kunin was called for Tripping on McAvoy. The Bruins had a six on four once they were able to pull Rask again. Once again the Bruins were able to possess the puck and move it around the Wild zone. Bergeron lost his stick at one point and skated back to the Boston bench for a new one. Krug had the puck at the blue line, moved it to Krejci at the left dot, Bergeron re-entered the zone and took a pass from Krejci and quickly dished it back to Krejci who wound up at the bottom of the left circle and blasted a one-timer past Stalock tying the game at 4-4 with 1:07 left to play. After three the shots were 38-33 Boston.

In Overtime Krejci cut in from the right side and tried to backhand the puck past Stalock but this time the goalie stopped him. Back at the opposite end, Dumba unloaded a shot from the blue line that Rask had to make a split save to keep out of the Boston goal. The Defenseman’s shot was re-directed off of Charlie Coyle‘s stick.

Krug’s goal came as he took a Bergeron pass from the blue line back below the goal line in the Boston zone and skated it out through the neutral zone. After he crossed the red line Krug had a cushion of space and turned on the jets past Parise then split the Wild defenders, Kunin and Hunt, and slid the backhander through Stalock’s legs for the game-winner at 2:41.

Boston outshot the Wild 39-36 but the two teams were even on the face-off wins at 50% each. Boston outhit Minnesota 25-23 on the night.

“It was a game you’re sitting there going ‘Jeez we’re in the game but we can’t seem to get any traction’,” said Bruins bench boss Bruce Cassidy. “Whether it’s killing penalties or some fortunate bounces for them around the net. Give credit, they went there, they deserved to get some second chances but hey you never know in this game. We saw it happen to us right here not that long ago, a bigger lead so…”

“Right now, we blew a two-goal lead with under five minutes to go,” said Wild coach Bruce Boudreau. “We took a penalty, they have a 31% power play, they scored so they got life. We missed a breakaway. We take another penalty, they pull the goalie, six on four they’re a pretty dangerous team. Then in overtime, I don’t know what we were thinking.”

“For 55 minutes I thought we played outstanding,” added Boudreau. “Even in the third period when I thought they were trying to put a push on positionally we were great. Sometimes coaches take it a little harder than players. I’ll get over it by tomorrow.”