Why the Isles Effort Fell Short in OT

The New York Islanders gave their all in Game 4 of their series against the Washington Capitals at the Nassau Coliseum, it just wasn’t quite good enough. In a series between two teams that both finished with 101 points in the regular season, little things can mean a lot. The Capitals did the little things just a tad better than the Isles and skated away with a 2-1 overtime win. The series is now knotted at 2-2.

Nicklas Backstsrom ended the game at the 11:09 mark of overtime on a deflection that found its way past Jaroslav Halak. Alexander Ovechkin had given Washington a 1-0 lead at the 13:06 mark of the opening period but Casey Cizikas aswered for the Isles in the final seconds of the opening period when he put home the rebound of a shot by Cal Clutterbuck.

How did the Islanders fall short despite outshooting the Capitals 37-30 and controlling the tempo of the game for long stretches? There were a few reasons that stood out.

First, the Islanders failed to take advantage of their chances on the power play. They had four opportunities with the man-advantage in Game 4, but went 0-for-4. The Isles have yet to score a power-play goal in this series in 10 chances with the extra attacker. In an evenly matched series like this one, the failure to score on the power play can be a killer. Washington had only one power play opportunity in this game but the Isles couldn’t capitalize on their extra chances.

“When you have a power play you want to score,” Isles’ captain John Tavares said. “We had some shots, we had some looks, but we need to find a way to get one.”

Next, the Islanders best players were not their best players in Game 4. The Islanders best line by far was the fourth unit of Cizikas, Clutterbuck and Matt Martin. They scored the only goal for the Isles and spent long stretches of time in the Washington zone. The line managed six shots on goal as a trio and set the tone for the entire team from the opening faceoff on.

The line was also very physical. Clutterbuck was credited with nine hits, Martin with seven and Cizikas with four. Capuano rewarded them with more ice time than they usually get and rightfully so.

But the rest of the lines didn’t quite produce at the level the Islanders had hoped for. The top six forwards weren’t bad, but instead of leading, they were just playing OK and did not lift the team in key moments.

Meanwhile, the Capitals best players stepped up their game at key moments. Washington’s top unit scored both goals with Ovechkin potting the first and Backstrom scoring the overtime winner. “The Great Eight” had eight shots on goal while Backstrom added five more. Ovechkin and Joel Ward were each a plus-one, Backstrom finished a plus-two.

Finally, the Islanders were forced to play this game with just five healthy defensemen after veteran Lubomir Visnovsky was knocked out of the game at 5:54 of the second period on a vicious charge by Washington’s Tom Wilson. Wilson clearly left his feet to deliver this hit and could have easily been assessed more than the minor penalty he received for charging. 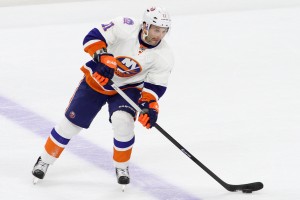 The Islanders missed Visnovsky’s experience and leadership. As the game wore on, having only five healthy defensemen took it’s toll. This was a physical, closely contested 1-1 hockey game. The longer the game lasted, the tougher it was on the remaining five blueliners. The Islanders were already without the injured Travis Hamonic who has missed the first four games of this series. Without Visnovsky in the lineup, the home team was playing without two of their top four defensemen. Eventually, that caught up with them.

“Our guys gave it everything they had back there,” Capuano said. “But you’re not going to play a 60-minute plus game–it gets really grueling on our defense. They played a lot of minutes…Also, when we got down to five defensemen, I don’t think our forwards did a good job of managing the puck for them. We turned some pucks over that should have been behind their “D.”

Because of Visnovsky’s history of concussions, he may be unavailable for some time. Expect the Isles defensive depth to be further tested as this series continues with either Griffin Reinhart or Matt Donovan the most likely candidates to step into the lineup if Visnovsky and Hamonic remain unavailable.

This series is far from over. It seems that either team can win any game in this series. The Islanders outplayed the Capitals for long stretches of Game 4, but they didn’t do enough of the little things to win the game.

They’ll have to do better in Game 5 and beyond or their season will end very quickly. They could also do the little things and be at the beginning of a long playoff run.

Only time will tell if the Isles are able to pay attention to detail and find the edge they need to eliminate the Capitals.

Game 5 will be Thursday night in Washington with Game 6 scheduled for the Nassau Coliseum on Saturday.