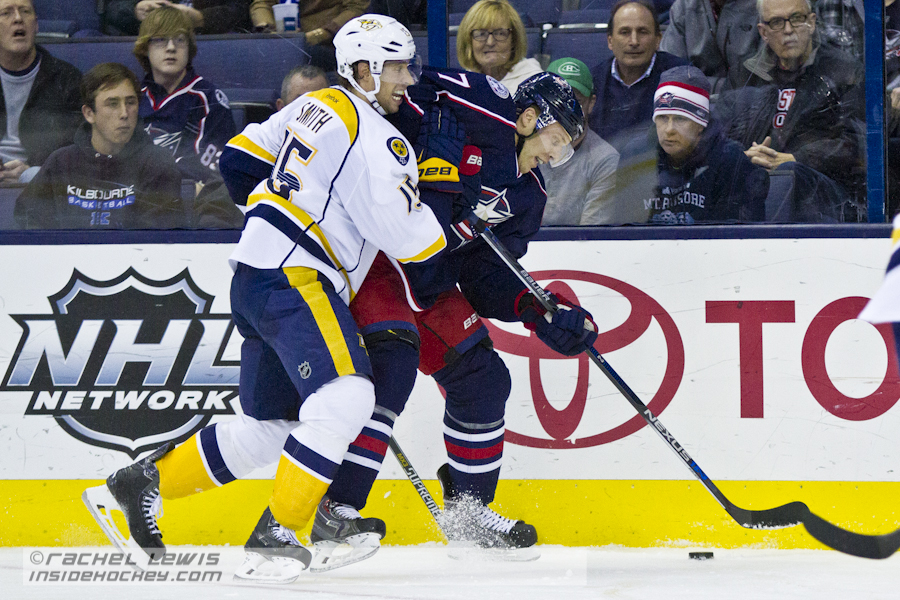 What’s ‘The Way Forward’ for the Columbus Blue Jackets?

To call the Columbus Blue Jackets 2015-16 season an unmitigated, cataclysmic disaster is an understatement. Expectations, to be kind, were extremely high – the Blue Jackets qualified for the Stanley Cup playoffs for only the 2nd time in their history in the 2013-14 season, then, the following season was an injury-riddled nightmare as the Blue Jackets were the runaway winner of the not-so-dubious statistic of ‘Man Games Lost to Injury’.  A sizzling 15-1-1 finish, when the roster was essentially and finally healed for the season-long plethora of injuries, it was believed that, if the Blue Jackets could avoid the ‘injury bug’, that they could return to their greatest heights in their 15-year history.

However, this season was anything but that as a horrific 0-7-0 start, one in which they were outscored 34-13 in each loss and each loss by at least a 2-goal margin which led to the firing of head coach Todd Richards and subsequently being replaced by John Tortorella. Shortly after Tortorella became the new head coach, a long-time and escalating impasse occurred between its top-line center, Ryan Johansen and Tortorella on a variety of levels, notably Johansen’s lack of conditioning and lack of engagement in crucial stretches of games, which culminated in Johansen being traded in January to the Nashville Predators for highly-regarded, young defenseman Seth Jones.

Even after the trade occurred, it appeared that the belief that the Blue Jackets were an ascending power in the National Hockey League (NHL) was, as uber-analyst Bob MacKenzie of TSN noted, a mirage that, their success, particularly in the 2013-14 season was an aberration and that the construct was not one for sustained success but rather requiring the return of what Blue Jackets Team President of Hockey Operations John Davidson often labeled ‘Brick by Brick’.

Although the Blue Jackets inched closer to the .500 mark, a recent 2-8-0 slide showed that what was once thought to require tinkering will, in fact, require continual efforts to construct the organization, leaving their long-suffering fans aghast that, once again, patience will be required.

So, to coin a term often used in business settings, what’s ‘the way forward’ for the Columbus Blue Jackets?

To begin with, even with six veteran players on their 25-man roster who average 32.5 years of age, the Blue Jackets are the NHL’s 5th youngest squad and only, on average, a half year younger than the NHL’s youngest team, the Edmonton Oilers.  So, Blue Jackets General Manager (GM) Jarmo Kekalainen has constructed a foundation of solid, young players and prospects resulting in the organization being ranked with the 3rd best prospects pool in the NHL.  Players such as recently-signed Zach Werenski, the 8th overall pick in the 2015 NHL Entry Draft, Sonny Milano, the recently-called up 1st round pick in the 2014 Entry Draft and Oliver Bjorkstrand, a former 3rd round pick by the Blue Jackets who was also recently called up after spending the prior few seasons tearing up the Western Hockey League (WHL) and learning to adjust to the professional level game in the American Hockey League (AHL) create great hope for the future.

However, it’s the current roster pool that has baffled the Blue Jackets ‘brain trust’ and requires a return to the ‘drawing board’.

As with most great NHL organizations, a build from the ‘back end, forward’ appears to be the direction that the Blue Jackets have opted to leverage their change of fortunes. This directional change was signaled with the trade for Jones, who was immediately paired with young defenseman Ryan Murray the 2nd overall pick in the 2012 Entry Draft and who has appeared to have finally shaken the ‘injury bug’ that has plagued him for the majority of his professional career as the Blue Jackets top defensive pairing.  The re-signing of 3rd pairing defenseman Dalton Prout and long-term signing of David Savard along with the recent signing of Werenski and the steady play of Cody Goloubef signals that the Blue Jackets appear to be building their most solid defensive corps in their history.

This would also signal that rumors of their attempts to trade veteran defenseman Fedor Tyutin would be in their plans over the off-season and possibly the same for defenseman Jack Johnson who was lost for the remainder of the regular season in March and has been long-rumored to be on the trading block. However, Johnson’s off-ice legal issues (bankruptcy) are well-known and could scare off other NHL squads from any interest in acquiring him via trade, not to mention his defensive shortcomings, a career +/- rating of -126 over 629 NHL games played.

As for the bedrock of most successful NHL organizations, it would appear that the Blue Jackets would be set in the net with 2013 Vezina Award (NHL’s best goalie) recipient Sergei Bobrovsky; however, Bobrovsky continues to be plagued by the ‘injury bug’, several of which are lower-body injuries which usually sideline Bobrovsky for long stretches of the regular season, as evidenced by Bobrovsky’s highest number of regular season games played in 58 games which is barely 2/3rds of the regular season.  Bobrovsky has also suffered his worst NHL season of his career this season, save for the season in which he served as Ilya Bryzgalov’s backup with the Philadelphia Flyers.  A healthy Bobrovsky is crucial for the Blue Jackets fortunes.

However, due to a long-term injury to backup goalie Curtis McElhinney, the Blue Jackets had to call up Joonas Korpisalo to take over in goal while both goalies were out with injuries. After struggling with adjusting to the speed and level of quality of the NHL, Korpisalo was outstanding in goal for the Blue Jackets and, should Bobrovsky continue to struggle with both injuries and performance, Korpisalo could give Bobrovsky the push from the bench that he needs, as McElhinney has only generally been an injury stop-gap for Bobrovsky.

If the Blue Jackets are going to contend in the very near future, they will need a bolstering of the pop-gun offense. The Blue Jackets rank 24th out of 30 NHL teams in goals scored per game.  Of course, they are also ranked 29th in goals allowed per game but with a usually defensive-centric coach in Tortorella who believes a great defense ignites offensive production, their young defense will improve enough if the offense can improve as well.

The Johansen trade left a gaping hole at the center position as did the trade of Artem Anisimov during the off-season to acquire forward Brandon Saad from the Chicago Blackhawks, two moves which forced centers Brandon Dubinsky, Alexander Wennberg, and William Karlsson to move up to forward lines much higher than they should be manning. Of course, winning the NHL’s draft lottery, something the Blue Jackets have bafflingly never been able to win, and nabbing the prohibitive number one overall pick in Auston Matthews would quickly rectify the dearth at the center position.

As for veterans on the Blue Jackets forward lines who could be traded in the off-season, Scott Hartnell who, like Tyutin, was rumored to be traded at the NHL’s trade deadline in March but wasn’t traded; however, a trade of Hartnell will be much easier to accomplish in the off-season when the respective NHL squads can fit a valued forward like Hartnell into their salary cap and future plans. Other veteran forwards who will likely be traded, let go to enter free agency or released at the end of this season will be Rene Bourque and Gregory Campbell.  David Clarkson could also be dealt; however, with Clarkson’s restrictive contract, high salary and remaining term and diminishing production, trading him to another squad will be quite difficult, which may force the Blue Jackets to consider an amnesty buyout, something the small-mid market team could find even more difficult to accomplish.

Kerby Rychel, the 19th overall pick in the 2013 Entry Draft, has had an acrimonious relationship with Blue Jackets management and has not helped his cause with less than stellar play with the parent squad, could be likely dealt as part of a trade package.

Assuming, however, those veterans are traded in the off-season and with it, allowing some salary cap freedom, in the range of anywhere from $15-$25 million, the Blue Jackets could, either via trade or free agency acquisition, bolster their offense by acquiring players like Mikkel Boedker, Kyle Okposo or Michael Grabner in free agency or acquiring via trade for NHL-ready prospects.

As it stands, although for a team with one of the NHL’s worst record, no one is safe, forwards who the Blue Jackets appear to be set with, going forward would be Dubinsky, captain Nick Foligno who has suffered through a rough season after career bests in goals and points scored, Saad, Cam Atkinson, Boone Jenner who’s had a breakout season, Karlsson, Matt Calvert and Wennberg. This, however, comprises only 3 forward lines, many of which are occupied by players who on more elite NHL rosters would be playing on lower (2nd, 3rd and 4th) forward lines.  Fair or unfair, this is the reality of a struggling team.

If, however, Bjorkstrand, Milano, and Werenski could make the parent squad, next season, something the usually patient prefers not to do in rushing young prospects, particularly on defense, the Blue Jackets could have a seismic improvement, next season and in the future.

No matter the approach, it’s certain that the Blue Jackets will have to approach next season and the seasons that follow with a ‘Brick by Brick’ philosophy and hope that their long-suffering and ever-patient fans will continue to support them as they deserve so much more than they’ve been given, to date. Fortunately for them, and for the first time in their history, the Blue Jackets do appear to have the right management group in place.