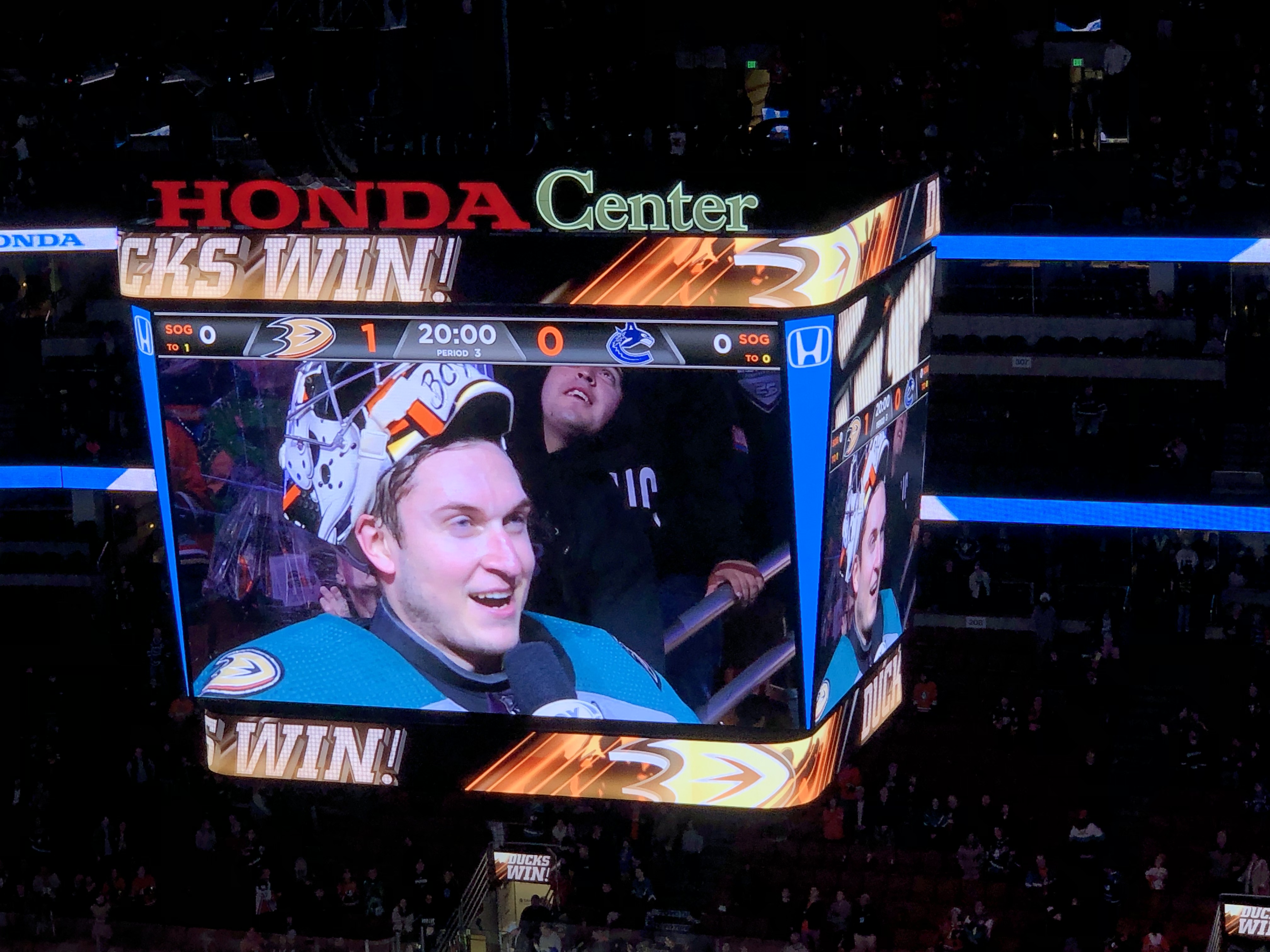 The Vancouver Canucks came into Anaheim Wednesday night with not-unreasonable hopes for the playoffs. They were two points behind Minnesota in the wildcard race, though they were a mediocre 4-4-2 in their last ten contests. They had also lost their prior game, 7-2 to San Jose and four of their previous five, with one win and one OT point in that span.

Their goaltending issues almost mirror those of Anaheim. Thatcher Demko has a sprained knee, and the other premier goalie, Jacob Markstrom, woke up one morning recently with stiffness. As a result, they had to go to their third goalie, OHL regular and good prospect Mike DiPietro.

Good prospect. Not NHL-ready netminder. He played against San Jose, allowing three goals in the first period on ten shots. Three more in the second on five more shots. And one more in period three, on nine shots. That added up to seven goals in 24 shots. His attitude was good, focused on how he felt more comfortable as the game went on. But that’s no comfort to the players in front of him.

To shore up the cage, the Canucks picked up Marek Mazanec from the Rangers for a seventh-round pick. He had to clear Canadian immigration before joining the team in the US, but he was on the bench as backup for the Ducks game. Meanwhile, young DiPietro was back in Ottawa doing work for the 67s, and Jacob Markstrom was in net for the Canucks, restoring at least some sense of normalcy.

The Ducks, meanwhile, started Kevin Boyle in his second appearance in the league. He was backed up by Ryan Miller, just off IR. Boyle was brought in in relief of Chad Johnson on Saturday in Philadelphia, allowing two goals on 26 shots. Johnson had allowed four on 14 shots in the first period. He shut the Canucks out on 35 shots.

Boyle was solid in the first period versus the Canucks, shutting them out on 15 shots. He was helped by Elias Pettersson hitting the crossbar on a one-timer from the right slot on an early power play.

The Ducks started out slowly, though the line of Getzlaf, Perry, and Rakell played a lot. They scored on a hustle play out from behind the net with what was listed as the third line all figuring in on the goal by Silfverberg.

Players were apparently out to prove themselves. Too bad Ryan Kesler’s attempt at that hearkened rather back a few years than forward. He fought Josh Leivo for no apparent reason in front of the Ducks’ bench. He won the contest. But “Coach” GM Murray didn’t acknowledge him as he came back to the bench after the five minutes in the box were done.

There were further scuffles, including a bit of a dust-up behind the Vancouver net with the Ducks on the power play. Perry and Erik Gudbranson were involved in that, with others, including Silfverberg.

Near the end of the frame, the game opened up quite a bit. The period saw the Ducks shorthanded twice but, obviously, killing both chances off with no goals allowed.

The second period opened with another show-me fight, this time between Gudbranson and Getzlaf. This one had some actual punches exchanged. Apparently, the fight was retaliation for a hit Getzlaf had made, at center. It looked more like an accident than intention, but oh well.

The coach-substitute, Bob Murray, said afterwards that he appreciated the emotion that his star players had played with, naming Kesler and Getzlaf particularly.

The period proceeded with the Ducks registering six shots to total 12 and the Canucks getting eight to finish with 23. One Ducks’ chance hit the goalie and then banged off the post. It was as close as they came. At the other end, Boyle was quite strong in the Anaheim net. The Canucks put on a flurry with about a minute left in the period. Boyle’s response featured three good saves. One was on a bang-bang play out from behind the net. Another was from the low slot. Boyle was big in positioning and used his glove to good effect.

The third period saw Vancouver get a further 12 shots, none of which, as was said, went in. The Ducks got the 1-0 win on the strength of good goaltending and good team defense. There were some dangerous chances, but not much given in close by the Ducks.

What did the coach learn from his first game behind the bench? He said afterwards, “We haven’t won in a long time, and everybody’s gripping it a little hard, but that’ll come, that’ll come. I thought it was a really good effort, and the goaltender played really well.”

His leaders were good, and “everything was positive on the bench . . . . When you’ve struggled as bad as they’ve struggled, you’ve got to learn to trust one another again, and that’s slowly going to come. There was some good pieces of them trusting one another tonight, and you’ve got to build on that . . . .  Those things were positive. I need more of that.”

He later commented on the emotion the team played with. “There was some emotion there. Some push back.”

One surprise was how hearty Murray was in his praise of the Kesler line. That would be the fourth line, with Max Jones ad Carter Rowney: “I thought the Kesler line . . .  got pucks deep and got on things. It was a really good game by Kess’s line.”

In fact, it was a really good game by Jones, who ragged the puck for almost a minute on one shift in and around and behind the Vancouver net. Their actual production was Kesler with no shots, Rowney with three, and Jones with one. Kesler, to my eyes, looked slow, especially on the backcheck.

One thing Murray should have discovered is how horrible his team is at penetrating the zone on the power play. In period two, twice on the same PP they had one guy rush the line. Both attempts failed. Later, Derek Grant put the puck backwards into the center of his own zone rather than forward into that of the Canucks. A second power play resulted in the same thing. Things got worse: Perry lost the puck at the Vancouver blueline, then lazed back to his own end while Vancouver went down on a shorthanded two-on-one. He was saved by the defenseman, who broke up the play.

Perry might have made up for this mistake by his play later in the period. As he has been so often over the year, he was right, directly, smack in front of the goalie, making a complete screen. The puck sailed past him and the netminder both, but wide.

So let’s sum up: in a “show me” game, Kesler and Getzlaf had fights. Silfverberg scored a goal. The young goalie was solid. Perry was slow but bravely stood in front of the net. The defense was mostly more solid than aggressive, which is not all that typical for a team that often turns its defensemen loose. Murray alluded to the defensive structure in the Ducks zone without being very specific about the new plan: “They had a bunch of blocked shots, . . . and that’s what we’re, as we’ve changed our defensive zone a little bit, we’re going to have to block some shots, and have layers, and let them shoot from the outside.”

Maybe there is hope in Anaheim. In any case, their new coach has a perfect record.

The Ducks now play at home on Friday and Sunday. That day, Scott Niedermayer’s #27 will be retired. The opponents are Boston and Washington, respectively, each on the front end of a back-to-back with the Kings.