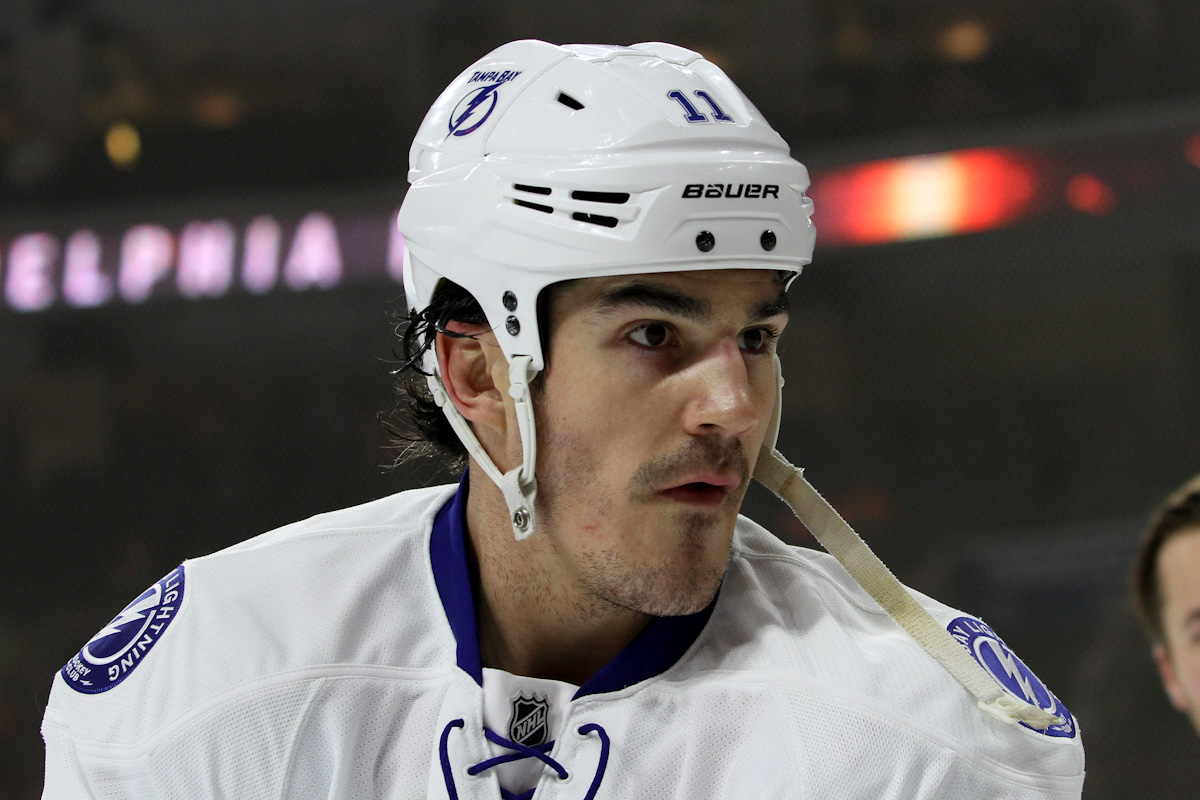 “Kopitar’s sick. Quick, everyone scamble to figure out a plan!” That must have been the cry at Staples Center Monday morning before a super-rare 1pm start against the Tampa Bay Lightning. Maybe even the Lightning themselves said it.

Two things happened: the loss of the star forward caused a waterfall effect of changes throughout the four lines, and the Kings also made two defensive switches, making a third of their defense different.

Why so many shifts? They had played a lazy, loose game in winning against Winnipeg on Saturday evening, and perhaps Sutter was hoping to tighten things up. It didn’t work, and while the numbers in period one were roughly equal at 13 shots to 12 for the home team and a 1-1 score, the game was anything but tightly played. In fact, the Kings were outshot by a handful early on, Peter Budaj getting shelled with good chances.

That the Kings were on the board at all came thanks to Kyle Clifford. Now get this. First shift of the game for him, about a minute in, he leaves his head down going up ice. Defenseman Luke Witkowski hit him hard, with a clean shoulder, not to the head. Clifford immediately fought him, at center ice.

John Cooper commented on the fight after the game: “It was a difference-maker for us. It’s not been a staple of our team being big and physical, but he brings an element like that to the game. He happens to hit a guy who is going to come right back at him in Clifford, and it was two honest players. One guy got hit and got up and wanted an answer for it, and Luke stood up and answered, and that’s what guys like Clifford and Luke do, and it was uplifting for us for sure.”

So Clifford sat in the box mulling it over, and when he got out, he immediately scored a goal. Or more or less immediately. His line (Clifford with Nolan and Shore) held a puck in the TB zone. Clifford pursued it behind the net, where the goalie was trying to play it. Clifford squeezed between the keeper and the boards, stole the puck, and whipped in around into the left side of the net (from the offensive POV).  There was no assist on the goal.

It was two-thirds of a Gordie Howe hat trick, and he needed only the easy part to complete it. His co-pugilist, Luke Witkowski, was also on the brink of a GHHT, having contributed an assist on the Tampa Bay goal. He was less likely to complete, given that he’s a D-man and that he had not scored in 30 games coming into the night over the course of his career.

In the end, neither did it.

The second period saw the Lightning go up by a late goal on a two-on-one from the blueline which turned into a three-on-two with the puck down to the right side of the net. Filppula got a try to poke it home, and the goalie’s foot pushed the rebound out to Boyle, who stepped back and shot, purposely deflecting the puck off of Dustin Brown, who was back in the crease to help out, and in.
Or at least that’s how it looked. When he was asked about it after the game, Boyle laughed. “Sssh. I was behind the goal line,” he said, like it was an accident. “I wasn’t going to score on the direct shot.” So maybe he did do it on purpose. Hard to tell.

The shots for the period were 11 for the visitors, nine for the Kings, but here’s the thing: this period was nowhere close. The Lightning had almost all the good chances, and they controlled the puck pretty much the whole 20 minutes. One exception was a good early shift by Setoguchi, Andreoff, and King for Los Angeles.

The other lines, by the way, were the intact Brown with Pearson and Carter and the new Dowd with Gaborik and Lewis.

It wasn’t all zeros for LA. There was a nice mini-break by Nic Dowd, who burst into the zone and shot one high that Ben Bishop barely got an arm out to deflect. Oh, and Gaborik; he took the puck from the side to the front of the net for a shot, dangerous, which yielded a rebound.

But Tampa Bay outshot the Kings 7-1 to begin the frame, and they mostly controlled the puck after that.

There are two alternatives, or maybe three, as to why a game that looked so lopsided to the eye was so close in the numbers. First, it could be the homer advantage is with the Kings, and everything resembling a shot for them is counted.

Second, maybe the Kings are pouring on the shots when they can, evening up the SAT numbers, but without necessarily having to pay for it in terms of good possession time. Is there a “clean possession” stat out there somewhere?

Or maybe, the stats just sometimes lie, and the quality of play or dominance of one team can’t be measured by the possession figures.

In any case, period three was more even, in terms of play, with the Kings holding the puck in the Tampa zone quite often. They were aided by an early power play, but their strength was that Carter decided there was a game on. He burst in from the right side with about five minutes gone, waited, and launched a wrist shot that beat Bishop but didn’t quite find a way through his enormous leg pads. It came awkwardly out to the slot after the goalie got a piece.

The line he was on played another good shift with about eight minutes to go, and but for the puck getting past Pearson at the blueline and back out to center, might have had a dangerous chance to the net.

Cooper summed up his team’s play by saying he thought they deserved the two points (so did I). “They played extremely hard against a big, strong, physical LA team. It was fun tonight. It was fun to watch.”

Dowd took a puck to the side of the face during the Kings’ power play on a clearing attempt by the TB squad. He left with a bloodied towel held to his face but was back a few minutes later.

When Cooper was asked about Victor Hedman not playing, he said, “He wasn’t doing too well. He wasn’t feeling too well today. I wish we had a day [between games].” He asked why Kopitar was out, and was told the flu. He said, “Maybe they ate at the same restaurant.” So Hedman apparently has food poisoning. The team plays in Anaheim tomorrow (Tuesday) night, which is why the coach made the day-between reference.

Earlier, Brian Boyle had also talked about Hedman being out: “You just kind of like, ugh, what else is new, right? I had no idea until warmups, but you just try to adjust. You try to do your job, and if you’re asked to do a little bit more, you do that as well.”