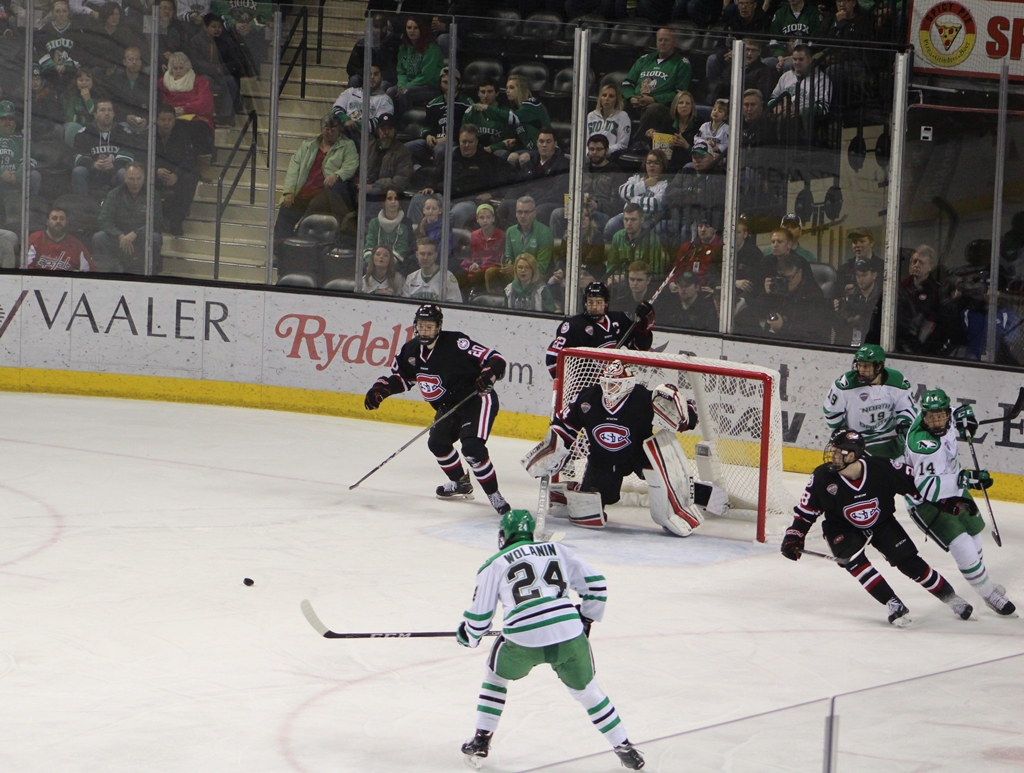 College Hockey’s March madness started with the conferences sorting out champions last weekend. Now the madness continues with the best weekend of the collegiate year, Regionals. Sixteen teams travel throughout the nation to earn a spot in the Frozen Four in St. Paul. First up is the regional closest to the Final’s site, the West Regional in Sioux Falls, South Dakota. Let’s take a look at the teams and how they matchup.

On paper, this should be a fairly easy game to sort out. St. Cloud is the top overall seed and boasts a unit of future pros. Meanwhile, Air Force was the fifth seed in the Atlantic Conference and their highest scorer wasn’t even in the top 25 of scoring in their conference. However, the NCAA Tournament is rarely so simple.

St. Cloud is indeed that good. Hobey Baker Nominee Jimmy Schult and Olympian Will Borgen headline the team on the blue line that holds teams to 2.49 goals per game. Behind those two, a strong goalie tandem of David Hrenak and Jeff Smith led the Huskies to the NCHC’s regular season championship. The two split goal time more than any national contender this year.

Hrenak got the starts late in the tournament and led them to the NCHC Title game against Denver. He did allow four goals to the Pioneers, but he is still a potent enough goaltender to lead a team to a championship. The offense is also strong, ranked fourth in the NCAA. No scorer has more than 17 goals, but the team sports a 40 point scorer in Robby Jackson, three 30 point scorers, and 17 double-digit point scorers. The Huskies can send waves at their opponents and overwhelm the net with pressure. They are loaded and capable of winning a National Championship this year.

Air Force is a defensively stout team headlined by Billy Christopolous in net. The junior filled in for Shane Starrett and ranked in the top 15 for save percentage and the top 12 for GAA. The rest of the Falcons’ blue line is stout as well, only allowing one goal on 60 shots in the Atlantic Semi-Final and Final. The Falcons offense can generate big threats. They ranked 40th nationally in goals per game, but they’ve found some punch late in the season. Erik Baskin, Phil Boje and Jordan Himley led the Falcons to a seven-goal explosion against Canisius and a pair of five-goal outputs against Army and Robert Morris respectively, the former to win the conference championship. If the Falcons win, it will be by limiting the Huskies’ offensive punch and getting a timely goal through David Hrenak.

Air Force is not a team to be taken lightly. They’ve made life miserable for teams in the tournament before and have battle-tested players who will match St. Cloud’s intensity. However, they have one primary method of winning: physicality and defense. St. Cloud can play that way or can blow the doors off the net with shots. For that reason, I’m picking St. Cloud.

This may well be the best-attended game of the weekend. Two teams from the state of hockey travel to South Dakota for a spot back in their home state.

Duluth started slowly after losing in last year’s National Championship game, adjusting to several seniors departing from the forward line and their goaltender leaving. The team was 8-9-2 before Christmas. Hunter Shepard settled the Bulldog’s net and Duluth started turning the season around with a strong performance in the Ledyard Bank Classic, winning the Holiday Tournament. Since then, the Bulldogs are 13-6-1 behind Shepard’s 10th best save percentage and eight shutouts. In front of him on the defensive pairs are Nick Wolff, Louie Roehl, and Jarod Hilderman. All can play both ways and can slow teams down through the neutral zone. The team has struggled to score at points, particularly in the NCHC tournament, where they scored one goal against Denver and North Dakota each. Still, Peter Krieger and Riley Tufte are experienced scorers and can make important goals happen. Scott Perunovich can also generate blue line shots and leads the team in assists. This is a formidable opponent.

Minnesota State enters rested, fully loaded, and hungry for a win over their in-state rivals. The Mavericks notched the nation’s top offense in 2017-18, with 3.87 goals per game. The offense is powered by a top-lined that stars C.J. Seuss and Zeb Knuston, both 40 point scorers. Seuss is a Hobey Baker Award nominee for his 22 goals and 23 assist performance this season. There’s also four additional 30 point scorers, three more 20 point scorers, and five double-digit scorers to round out the offense.

Mankato is the best rounded offensive attack in the NCAA this year. The defense is no slouch either, holding opponents to a WCHA leading and fourth-ranked nationally 2.08 goals per game. They brought in Connor LaCouvee to play goal alongside Jason Pawloski, and LaCouvee made the job his. The Boston University transfer led the WCHA in save percentage. While the Mavericks were upset in the WCHA playoffs by Michigan Tech, it did give them a chance to rest and heal up. They’re now healthy and proven they can beat Duluth. I’ll pick Mankato for their offensive potency.

In a hypothetical game between Mankato and St. Cloud for the regional championship, I’d pick the Mavericks. Minnesota State is on a mission to represent the WCHA and has more offensive weapons to fire.