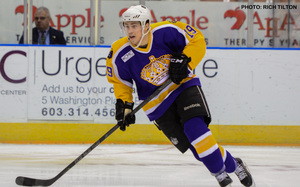 The crowd was hyped up and ready to see their beloved Monarchs take down the Bruins in honor of LA Kings Night at the Verizon Wireless Arena Saturday night.  After three periods of back and forth battling the Monarchs’ Jordan Weal was able to slam one past Malcolm Subban during overtime to give his team the win over the Bruins.

“We’re missing some pretty key pieces of the offense,” Head Coach Mike Stothers said.  “But we got a big goal from Gratton (tonight) and that’s what we need, guys stepping up and contributing“

With Shore being pulled up to the LA Kings, the Monarchs were forced to rely on different players while also adding some variations to the lines.  At 17:39 in the first period Josh Gratton earned his third goal of the season after jamming a rebounded puck through the back of the Bruins’ net.  Gratton did an excellent job getting open in front of the net in order to serve as a passing option as well as remaining ready to clean up any rebounds in front of Subban.

The goal occurred after the Monarchs demonstrated flawless tape-to-tape passing up ice between Gratton and his line mates Paul Bissonnette and Ryan Horvat who both received a point for their assists.  Gratton and his teammates had smart positioning and utilized solid communication, both of which helped them work the puck through the Bruins’ defensive zone.

This was just one instance where the Monarchs were able convert a takeaway from their opponent into a shooting opportunity.  The Monarchs offense may not have had as many quality scoring chances as the Bruins, but they never let up.  They continued to work hard to change their angle in front of the net and kept moving around the Bruins’ defense in order to create better opportunities to score.

The Bruins relied mainly on their talented stick work and quick speed while the Monarchs implemented many big hits that rendered their opponent’s playing greatly.  “I thought we played well.  I thought we played hard,” Stothers shared. “I thought our fore check was great.  (We had) a lot of hard hits, heavy hits. It was a good effort.”  Both offensively and defensively the Monarchs’ big hits were successful in taking down the Bruins and eliminating their ability to control the puck.

However, the Monarchs’ struggled at times for they often allowed themselves to be baited by the Bruins’ offense which caused them to bite early.  This allowed the Bruins to send sneak back passes that gave the player receiving the puck a solid shot on net free of traffic or defensive pressure.  This is exactly what happened at 15:40 in the second period when Brian Ferlin ripped one past Patrik Bartosak with the help of teammate Justin Florek.

In the end the Monarchs stay motivated and determined to win with the help of the 8,572 fans in the arena who were constantly cheering loudly for the Monarchs.  Especially as the game went on and both teams began to create bad blood between players the crowd increased their roars hoping to entice the players to fight.  Despite Andrew Crescenzi and various other Monarchs attempts to get a fight started by poking the bear, none of the Bruins agreed to drop the gloves and the game continued without doling out any major penalties.

The overtime period was relatively short-lived after the Bruins’ Colin Stuart earned a penalty for interference.  At just 2:29 into overtime the Monarchs’ power play proved to be very successful as Weal lit the lamp to end the game with a big win for the Monarchs.

The Monarchs power play was so successful because they maintained control of the puck with urgency rather than panic.  The Bruins used tight pressure against the Monarchs, but Weal’s strong stick skill allowed him to maneuver around the defenders and get a shot off followed by an aggressive pounce on the rebound to end the game 2-1 in OT.

Weal’s power play goal in OT pushes the Monarchs back into first place in the Eastern Conference for the fourth time this season.  Looking forward the Monarchs hope to gain momentum from this game as they take on the Sharks Sunday afternoon for the third time this week.