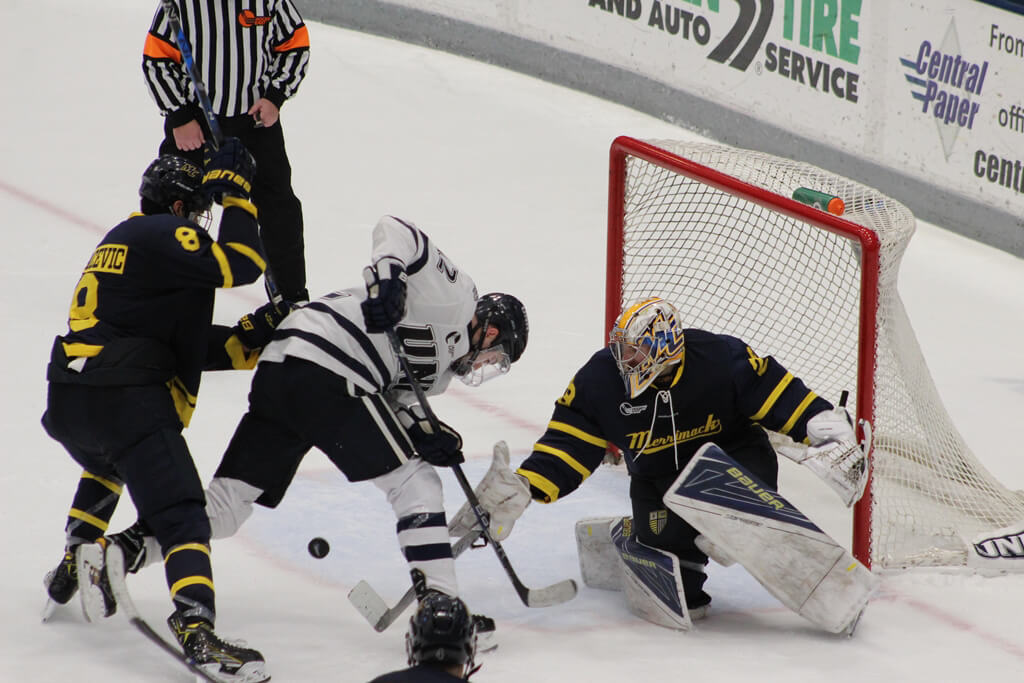 New Hampshire and Merrimack combined for a memorable playoff series last March. The matchup went the full three games and the Wildcats pulled the upset on Merrimack’s rink behind a 44 save effort by Danny Tirone in the final game. Warriors Head Coach Mark Dennehy remembered the meeting well.

With memories in mind, the Warriors made the trip 48 miles north to take on the Wildcats. The roles were reversed; Merrimack was the underdog in UNH’s building and the Wildcats wanted to improve their Conference standing with a victory. The Sunday matinee was one for the memories.

UNH gave their fans reason to celebrate early as Jason Salvaggio sent the puck to Michael McNicholas in the slot. The senior from Manhattan Beach, CA, deked around Warrior goaltender Craig Pantano for a 1-0 UNH lead 34 seconds into the game.

The cheering did not last long as the Warriors capitalized on UNH’s defensive breakdowns. Derek Petti got behind the UNH defense and snaked around Tirone for Merrimack’s first shot on goal and first score 6:57 into the game.

Two minutes later, Sami Tavernier repeated Petti’s move and gave Merrimack the lead. Alfred Larsson wrapped up the scoring after UNH turned the puck over behind their own net with 3:24 left in the period. UNH outshot the Warriors 14-9 in the period, but Merrimack held a 3-1 lead at the intermission.

The Warriors came out firing to start the second period. They outshot UNH 11-6 in the period and netted their fourth goal on a rush and a putback by Tyler Irvine. With that, Danny Tirone exited the game. The senior Alternate Captain of the Wildcats allowed four goals on 11 shots in one of his weakest performances this season. Coach Dick Umile took some blame for Danny’s performance.

“He’s started every single game, including this stretch of five games in nine days. I did consider giving him a break after the RPI game, but I decided to go with him. Maybe he needed a night to breathe.”

Mike Robinson replaced him and made his Whittemore Center debut.

“It was a dream come true for me. I grew up in Bedford, New Hampshire, I went to these games growing up. So to finally play here was awesome.”

The freshman performed well, saving all 12 shots Merrimack took against him in the game. UNH did not give him any goals in the period, so the Warriors held a 4-1 lead into the second intermission.

The UNH offense awoke in the third period, aided by some poor Merrimack penalties. Marcus Vela got a tip-in goal from Pantano’s doorstep 2:17 into the period. Seconds later, Michael Babcock was called for an interference penalty. New Hampshire worked the ensuing power play to perfection, cycling the puck through the zone and beating Pantano on a laser by Patrick Grasso.

The chances kept coming for UNH, but they could not get the equalizer. Merrimack killed time with well placed clears and staples into the corner boards, and UNH took two penalties that slowed momentum. Still, the chances came.

With less than 10 seconds on the clock, Patrick Grasso got the puck on his stick and fired a backhand shot meant for the top shelf glove side. The puck sailed high and crashed off the glass, hitting the ice as time expired. Merrimack escaped with a 4-3 victory.

Head Coach Mark Dennehy was happy with the win, but not thrilled.

“We’ve played much better in other games this year. We’ll celebrate the win. It’s only our fourth of the season. But we were determined to get them back into the game. We played with fire and escaped.”

Merrimack climbs to 4-9-3 overall and 2-6-1 in Hockey East. They jump out of last place in the conference, now one point ahead of Vermont. Freshman Evan Bell collected his first two collegiate points with assists on the Tavernier and Irvine goals.

The Warriors will close out the first half of the season with a Saturday matinee against Northeastern next week. Puck drops at 4pm at Lawler Rink.

New Hampshire wraps up their first half of the season and busiest stretch of the season in bitter disappointment. The Wildcats fall to 9-7-1 overall and 4-5-1 in Hockey East. They had a chance to break a tie with Maine, but left points on the table. Senior Michael McNicholas was crestfallen after the game.

“We had a chance to win, but we shot ourselves in the foot those first two periods. We got too happy scoring so early and didn’t play them well.”

Wildcat Coach Dick Umile was upset after the game.

“I wasn’t happy with the effort of some guys last night and I thought today was about the same. That’s not a good formula for winning hockey, playing from behind all the time.”

The Wildcats will sit for Exams and take a needed two-week break before hitting the ice again. They next play in the Ledyard Bank Classic at Thompson Arena in Hanover NH. They’ll face Dartmouth and Yale to end 2017. Puck drops at 7 pm on December 29th and at 4 pm on December 30th.