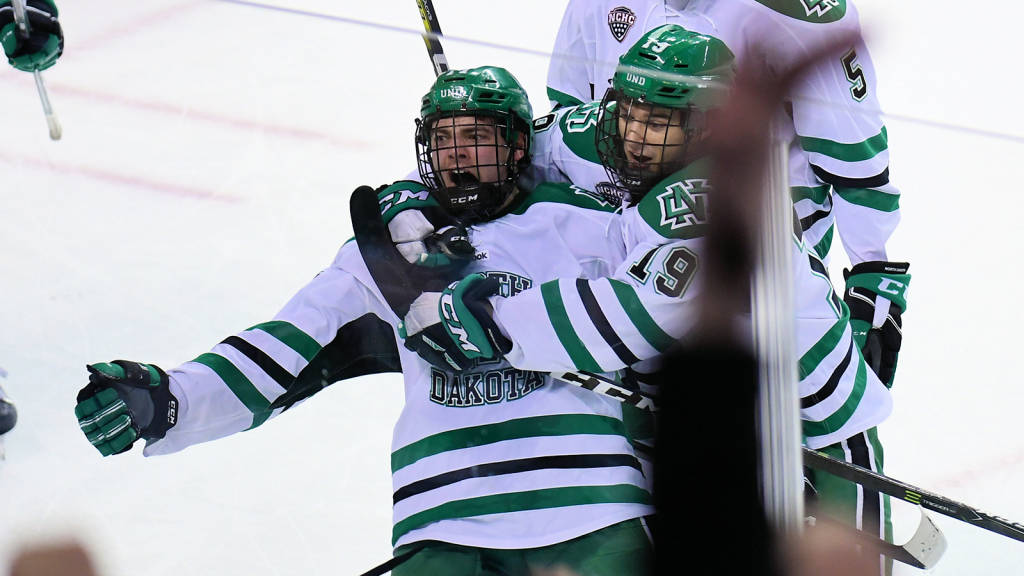 Photo By: Russell Hons for UNDsports.com

Grand Forks, ND – Good things happen to those who wait. During the second half of the season, the University of North Dakota has been waiting for their top players to catch fire. Finally, after experiencing a goal drought for nine games, UND’s top player Brock Boeser broke through with a pair of goals.

More on that later.

On Friday night, the Fighting Hawks came out of the gates like a team possessed. UND raced to a 2-0 lead in the first period. At the 10:49 mark of the first period, junior forward Johnny Simonson got the Hawks on the board with a nasty top-shelf goal. Freshman forward Tyson Jost scored his 12th goal less than two minutes later.

Things were looking good after one period of play.

At the 00:50 mark of the second period, sophomore forward Brock Boeser broke a nine-game goalless streak, scoring his first of two goals. Assisting on Boeser’s goal was Jost and Zach Yon.

Then things took a turn for the worse. The Hawks lost the momentum in the second period and started an ill-advised parade to the penalty box. Fortunately, UND killed all three UNO power plays but the momentum had shifted in the Mavericks favor.

At the 07:57 mark of the second period, Mavericks sophomore forward Steven Spinner buried his first of two goals to make the score, 3-1 UND. About two minutes later, Spinner scored again, to cut the UND lead to one. UND fans started to get antsy. Less than four minutes later, the Hawks’ one-goal lead evaporated with a marker from Mavericks forward David Pope.

Even with the way things transpired in the second period, there was no panic in the Hawks locker room. This time, instead of panicking, UND pulled off a much-needed win.

“Sometimes frustration gets into the game, but I thought our guys had a lot of composure,” Head coach Brad Berry said. “There was no panic and there was no yelling and screaming. (It was like) okay, we got this. We knew we did something (to get) away from our game, but there was no panic.”

“One thing I really saw on our bench today was just how composed we were,” Jost said. “There was no panic in our game. You saw it before, maybe at the beginning of the year when we got a little panicked and we kind of melted down. Our maturity is shining through and we’re becoming a team that really has a chance to win the whole thing here, the national championship.”

Fast and Furious in the Third Period

In the third period, the action was fast and furious. At the 4:04 mark of the third period, Hawks defenseman Christian Wolanin gave the hometown team a brief lead, 4-3 UND.  The Hawks lead would evaporate four minutes and 25 minutes later with a goal from Fredrik Olofsson. Tie game, once again.

No words Tyson, no words. pic.twitter.com/kCf7Vvzedh

Jost’s highlight-reel goal would end up being the game-winning goal.

“Bess (Boeser) made a good play… I was yelling behind the net for him to cycle it down low,” Jost said. “I saw that guy kind of pressuring me, so I thought I would lift his stick. I think he ended up losing the puck there. The way I scored my first goal, it was kind of the exact same play, except I shot a bit earlier and the guy kind of bites, so I faked the shot and slipped around him.”

After the game, Boeser was happy to get off of the snide and score a few goals. UND fans are hoping it starts an avalanche of goals for the Fighting Hawks.

“Obviously, it feels great,” Boeser said. “Obviously, it was a long month, not scoring and helping produce for the team. I think over that timespan, we were playing decent hockey. We were getting chances, they just weren’t going in. It definitely feels nice to get on the scoresheet again.”