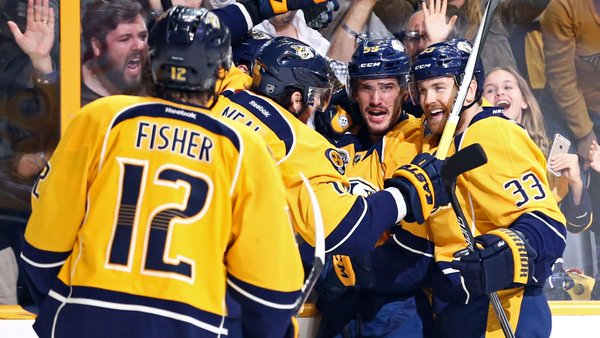 Chris Tierney came up big with two goals, but the San Jose Sharks had a feeling a deja vu Monday night in Nashville. The Predators forced overtime and found a way to win. This time, the Predators got the job done quickly, as Viktor Arvidsson scored the game-winning goal 2:03 into the extra period.

The Sharks didn’t waste any time and came out strong, holding Nashville without a shot on goal for the first half of the opening period.

Tierney finally cashed in at 9:55 when he deflected Marc-Edouard Vlassic’s wrist shot past Pekka Rinne to give San Jose a 1-0 lead. The play was reviewed but the officials confirmed that the goal counted.

Right after the first goal of the game, Sharks’ goalie Martin Jones finally made his first save of the night.

Less than two minutes later, Tierney found the puck off a deflection in front and slipped a backhand shot past Rinne to make it 2-0 Sharks, recording his second goal of the game and third of the playoffs.

Roman Josi grabbed the puck at the left circle and banked a backhand shot past Jones for an unassisted goal to cut the deficit in half at 15:27. The goal gave Nashville some momentum but the Sharks continued to lead 2-1 after 20 minutes, outshooting their opponents 8-5.

However, San Jose played tentatively in the second period and saw their lead slip away as the home team took control of the contest.

Ryan Johansen skated past a defender to the front of the net to tie the game 2-2 at 1:25 with a slick backhand goal on the power play.

The Predators continued to dominate play in the second period, outshooting San Jose 14-4 in the period, but Jones managed to keep the Preds off the board until intermission and the game was tied 2-2 after 40 minutes.

The Sharks received a power play and capitalized on it when Miikka Salomaki was called for high sticking Jones at 8:59. Couture fired a wrist shot from the left circle past Rinne for the go-ahead, power play goal and San Jose led 3-2 midway through the third.

But the lead was short-lived. Colin Wilson finished an attractive tic-tac-toe passing play with a wrist shot that beat Jones to tie the game 3-3 at 12:44.

The Sharks found themselves in a familiar situation, as the contest headed into overtime with a 3-3 deadlock after 60 minutes.

Just 2:03 into the extra session, Arvidsson roofed a backhand shot from the left circle past Jones to lift the Predators past the Sharks 4-3 and force a Game 7 at SAP Center on Thursday night. Pekka Rinne made 15 saves for Nashville. Martin Jones made 28 saves for San Jose.

The best-of-seven series is tied at three. The winner of Game 7 will advance to the Western Conference Final.

Up Next: Game 7 will be on Thursday at SAP Center.