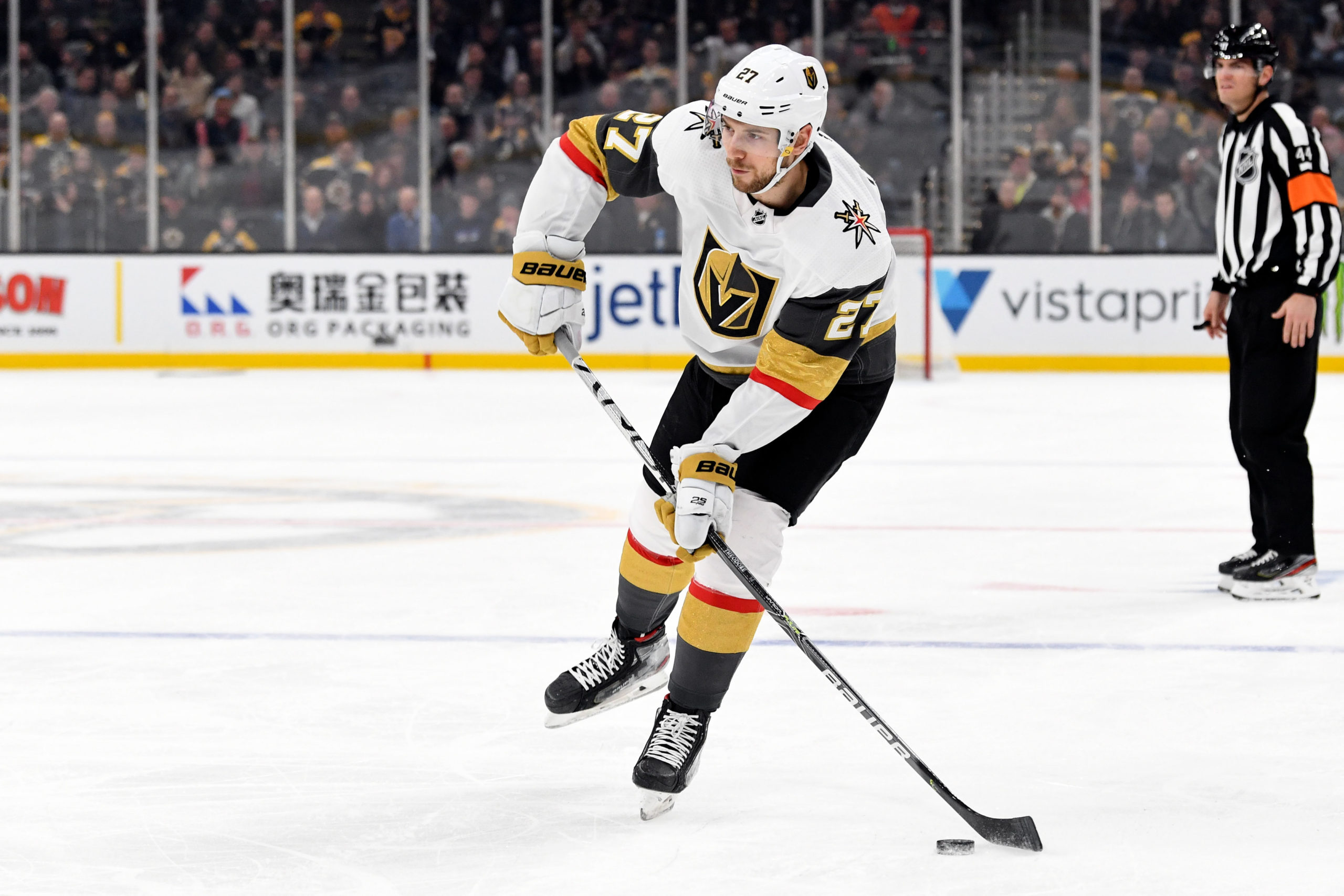 Let’s be real:  the Ducks ain’t buying this week at the trade deadline. They’re selling. Ondrej Kase went away to Boston. Rumours have other players (Derek Grant) leaving by the time the lunch bell rings in Anaheim Monday. 12pm Pacific is the deadline for moving players ahead of the playoffs.

One other rumour, squelched by Ducks’ media people Sunday night: David Backes, one of the products of the Boston trade, was held out of the lineup after skating Sunday (with a very few others) because he’s being flipped. Nothing doing, say the Ducks.

Anyway, Sunday at 7pm, the Golden Knights were in town This Vegas team travels well. Lots of people in gold, glittery jackets were spied crossing the street from the bars across. They were in force in the arena during warmups, too, and they yelled out “Night” (or rather, “Knight”) during the national anthem. They also cheered, like crazy, when Vegas’s fourth line scored the team’s first goal. It came at 12:49 when Brown jammed in a rebound off a shot by Gage Quinney (playing in his second NHL game) and Ryan Reaves. The goal was set up on a lazy dump by Kiefer Sherwood, who put it behind him to Vegas on their blueline.

To that point, play had been pretty even in terms of puck movement, but altogether lopsided in terms of shots. The Ducks get the puck towards the net, but they don’t put it on the net much. Shots were 6-1 for Vegas with eight minutes gone. As the period entered its final 20 seconds, it was 10-5 in Vegas’s favor.

The Ducks reversed things with their sixth shot, which came with .6 left on the scoreboard clock but was announced as taking place at 19:58. It was a lofter from the point that Devin Shore redirected behind his back. Good goal, and motivating.

The Ducks came out much stronger in the second frame, with John Gibson doing his part with two good saves early. One was on the toe, on a redirect, and the other came off his arm. He got just enough of it to send it out the other way wide of the net. Close, but a puck drifting through the crease is not going to help you win games. It’s just a save or a missed shot.

The Ducks’ main foible was lack of shots. They started to even things up as the game wound towards mid-way. With 10:26 left and play stopped, they were down just by three, 14-11. When play  resumed, Gibson held them in again—William Carrier went in alone, straight down the gut. He shot. Gibson shot his toe out. Second similar save, note.

And then the Ducks took the lead. Henrique chased a puck to the Vegas end and loosened it up. Two defensemen for Vegas, Nick Holden and Shea Theodore, each had a chance to handle it and did not. Nick Ritchie somehow knocked the puck into the net on a funny redirect. The time was 10:03 of the second.

The Vegas team didn’t sit still. They attacked, three times unsuccessfully before they put one in. The three were a slapper by Mark Stone that was partially saved and then went off the far (left) post; a point-blank chance by Reaves from the right side that was saved while Gibson was on his knees; and a lob to the net by Theodore with Stone cruising by the net.

Then Vegas rushed. Two Ducks, Silfverberg and Jones, had knocked into each other in the Vegas end and fallen. They tried to get back into the play, but three-on-the-rush was too much. The puck went from right to left with Alec Martinez scoring on the resulting redirect. Chandler Stephenson was in the center of the ice as a decoy. The assists went to Stone and Pacioretty.  They soon assisted again, on the third Vegas goal.

The game was 3-2 shortly thereafter, when Stone rushed the puck and almost exactly the same play as the second goal developed. Stone spotted Karlsson in the slot. He passed to the Swede, who timed his shot to let the screen develop. The latter was made up of the bodies of a Vegas player and the Anaheim defenseman.  There was less than a minute left to play in the period.

Deflating, perhaps, but the Ducks had held themselves in, and had even surged to the lead, just prior. They were getting the shots equation straightened out, also, with the period ending 21-18 in Vegas’s favor. The real negative—the two Vegas goals had come so close together, and the last one so late in the period. Kind of a reverse of period one. But the Anaheim team had to feel good about trading goals, and determined to get that late one back.

The third period was when the action actually started. The Ducks roared out and scored at 21 seconds to tie the game at threes. The tally was Ritchie’s. He would end up with two goals and two assists, the best night of his NHL career to date. He explained after the game: “It was a fun one to be a part of. We haven’t had many of those this year. We’re not the kind of team that plays the shootout style, but it turned into that tonight.”

Then Karlsson scored twice to make the game 5-3. Lost cause, many thought, and they  left. With five left to go, I looked around. Vegas fans remained in the building. Too bad, because the Ducks mounted a comeback, scoring twice in the last three minutes.

Devin Shore commented after, “Their fans travel well, and our fans are enthusiastic too. That turns the temperature of the game up. We did a pretty good job the whole game getting to the net and playing deep.” He said that they had been practicing getting second and third opportunities, and that worked out on the evening. For Henrique, two goals and two assists was the most points he’s had in an NHL game. He has never had a hat trick, but 21 times, he has notched a pair of goals.

Henrique commented mostly on his linemates. Nick Ritchie also had four points, also with two goals. Henrique’s were the fourth and fifth, as mentioned. Henrique said, “Nick’s been good for a long time, the past number of weeks especially, me and Nick seem to have that chemistry, even the last couple of years, for whatever reason. He plays a north-south game, goes to the hard areas, and uses the body.”

Coach Eakins afterwards also commented on the body of work of Ritchie, noting that he patrolled the wing in the old-school style. Fans remember his emergence in the playoffs a couple or a few years ago against Nashville, when he went to the net relentlessly. They hope that Ritchie is back—the power forward from the Peterborough Petes.The Ducks would let the tie go when they saw their captain, Ryan Getlaf, make a no-look pass behind his back in OT. That turned into a rush and Shea Theodore goal (former Duck). The end, thus, was 6-5. Too bad, though the comeback was enough to create some satisfaction among player and coach alike.

For Vegas, William Karlsson had a hat trick, his goals all coming within 12 minutes of playing time at the end of period two and into period three. The Ducks featured two four-point players, as was mentioned. Devin Shore also scored, his fourth career goal. Seven Ducks’ players had points. Rakell ended with six shots, tying Henrique for the team lead on the night. Rakell hit a post late, a shot that would have won them the game. Bad luck! But a great game if you like action and lead changes.

Your random Hampus (Lindholm) fact for the night: If Hampus could choose a soda, he’d take a Julmust, which is a special version of Coca-cola, according to my inside source.

The Ducks now play on Tuesday. Edmonton comes to town. The it’s Pittsburgh at the end of the week.

Cam Fowler was also out of the lineup Sunday with Vegas in town, but he’s hurt. I saw him making a cup of tea in the press box before the game. No cast, no bandage that I could see. No limp. Maybe he’ll be back soon. He’s certainly not going anywhere, despite other teams’ need for defense (Toronto, Carolina).