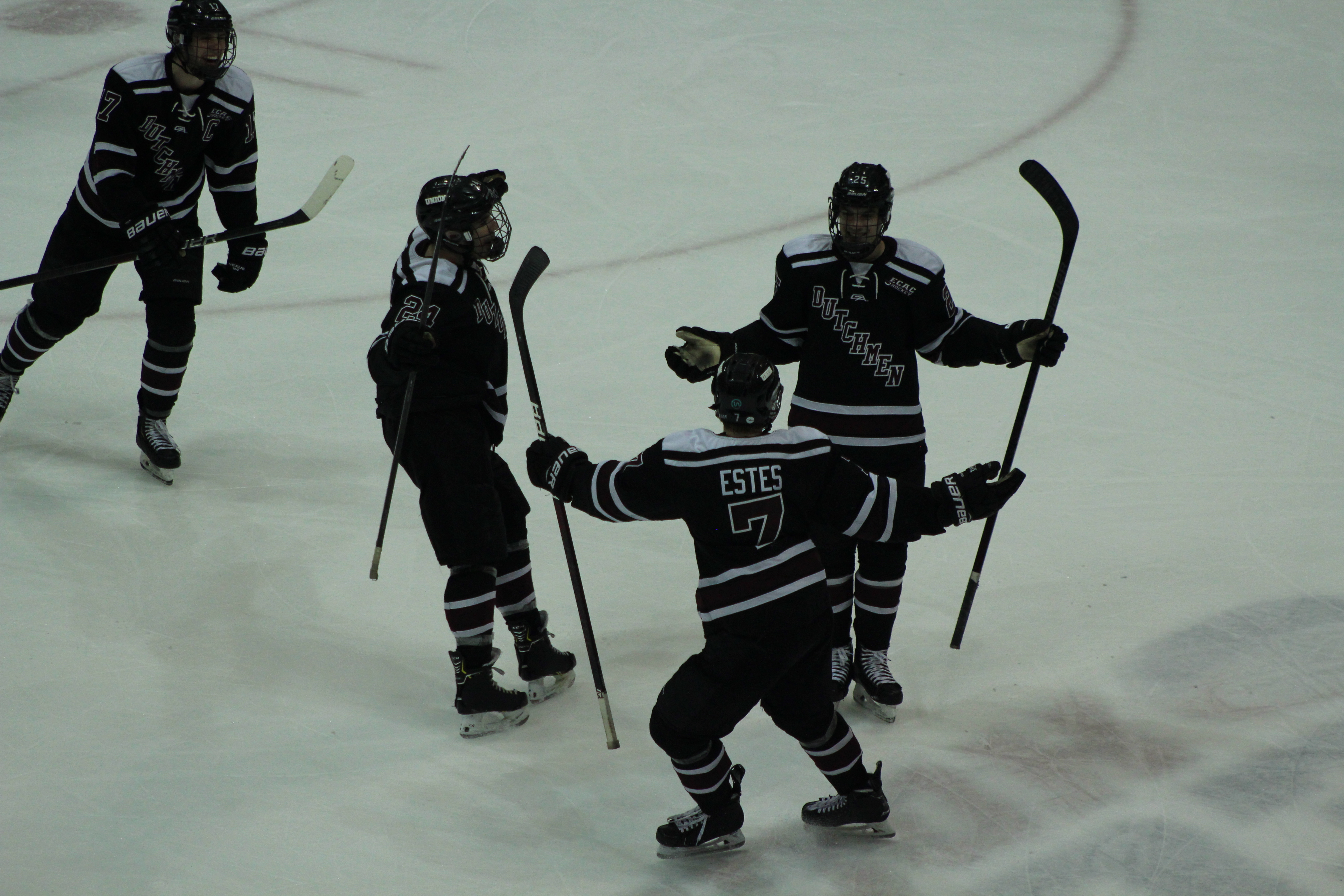 Union sneaks past Dartmouth to climb a spot in tight ECAC race.

Hanover, NH. — Coming into the 2018-19 season the Union Dutchmen were picked to finish in third place in ECAC play in the Coach’s Poll with Dartmouth College coming in at eighth place. In the Media Poll, the teams were fourth and sixth respectively. Coming into tonight’s match-up here in Thompson Arena the teams sit sixth and eighth separated by three points, Dartmouth at 16 and Union at 13. The Dutchmen are still alive in the Pairwise thanks to their 7-1-4  non-conference record. The Big Green meanwhile are fighting for survival by conference play. Two valuable points are on the line tonight in New Hampshire.

The opening period was controlled by the home squad as they peppered Sophomore goalie Darion Hanson with 16 shots. The Big Green had the better of the chances all period but were unable to solve Hanson. Dartmouth had the lone power play of the period when Union’s Zachery Emelifeonwu was sent off for Tripping at 11:04. The 55th ranked power play unit of Dartmouth wasn’t able to muster much, Union actually had the best scoring chance of the two minutes. Josh Kosack had a rush on Big Green goalie Adrian Clark that was turned aside.

The second period had Dartmouth jump out to the 1-0 lead at 3:38. Senior Cameron Roth fed forward Matt Baker who fought off a Union defender and put a wrist shot past Hanson. The Big Green lead was short-lived as a Union 2 on 1 opportunity ended with Dartmouth defenseman Joey Matthews redirecting the puck past a sprawling Clark to give the Dutchmen the tying goal at 5:44. Senior Greg Campbell was given credit for his fourth goal of the year. The assist on the goal Sean Harrison, his fifth and Jack Adams, his ninth. Union’s 22nd ranked power play unit was given its first chance at 12:16 when Will Graber was called for Cross-Checking.

The Dutchmen generated a few chances but the third worst penalty kill unit fed off the hustle of Junior Cam Strong. Strong played a majority of his shift without his stick but blocked a shot and kept Union from penetrating the box while he was out there. As the final few seconds ticked off the clock Dartmouth had a beautiful chance when defenseman Harrison Markell fired a shot/pass from the point to Quin Foreman down low in front of Hanson. Foreman had a spin-o-rama move that got Hanson to move but the goalie was still able to still get his stick on the shot. Dartmouth outshot Union 11-5 for the period and led the face-off battle 27-15 through two.

The third period started with Foreman in the mix again. The 6’-3” sophomore took a hit at the Union blue-line but floated a pass to a streaking Baker who had another mini-breakaway on Hanson, who made the stop this time. Shortly after this the duo again caused problems for the Dutchmen as Foreman set up Baker on another mini-breakaway that drew an Interference call on defenseman Ryan Walker at 3:50.

The Big Green had some early pressure on the power play but Union withstood it. The Dutchmen went on a power play of their own at 7:04 when Roth was called for Hooking. Cole Maier had a one-timer point blank that Clark stopped. Once again Foreman’s play led to a Baker chance on the penalty kill for Dartmouth, but Hanson got enough of the puck to tip it out of play.

The wheels fell off for Dartmouth when Union’s Maier won an offensive zone draw to the right of Clark. He won it cleanly back to Walker at the top of the circle, who calmly fired it past Clark for the 2-1 lead. With the Dartmouth net empty the Green were pressing in the Union zone, a mix up by the two players on the blue-line led to Michael Ryan chipping the puck out of the zone and winning the foot race to the puck and sent it in from just beyond the Dartmouth blue-line sealing the Union win, 3-1.

Dartmouth controlled play for 58 minutes of tonight’s action. The Big Green outshot the Dutchmen 34-24 and won the face-off battle 40-27. Union, however, came away with the two points, keeping them in eighth place, while Dartmouth fell to seventh.

Dartmouth coach Bob Gaudet said “I can’t ask any more of our guys, they played great. Tonight I thought our team played extremely well from start to finish. Its a face-off, the puck finds a way in. I thought we controlled, I thought we were really good defensively, we were good offensively, could be a night we score six. We just have to stick with it, this team is playing really, really good hockey.”

Gaudet spoke about the play of Foreman and Baker “We had a little bit of a scrambled line-up, we had some guys that are a little under the weather, we juggled the lines a little bit.” He said “The speed that Matty had getting up the ice was fabulous. They really played off each other, got behind their defensemen. They made some good plays and obviously, their goalie made a couple good saves on them.”

Gaudet echoed the sentiments of Union coach Rick Bennett “It’s a crazy thing, this sport, the puck has eyes sometimes, you know?”

Dartmouth takes to the road for next weekend’s North Country trip. They play Friday night at Clarkson and Saturday night at St. Lawrence. Puck drop is 7:00 pm both nights. The Dutchmen meanwhile host Quinnipiac and Princeton, both with 7:00 pm starts as well.