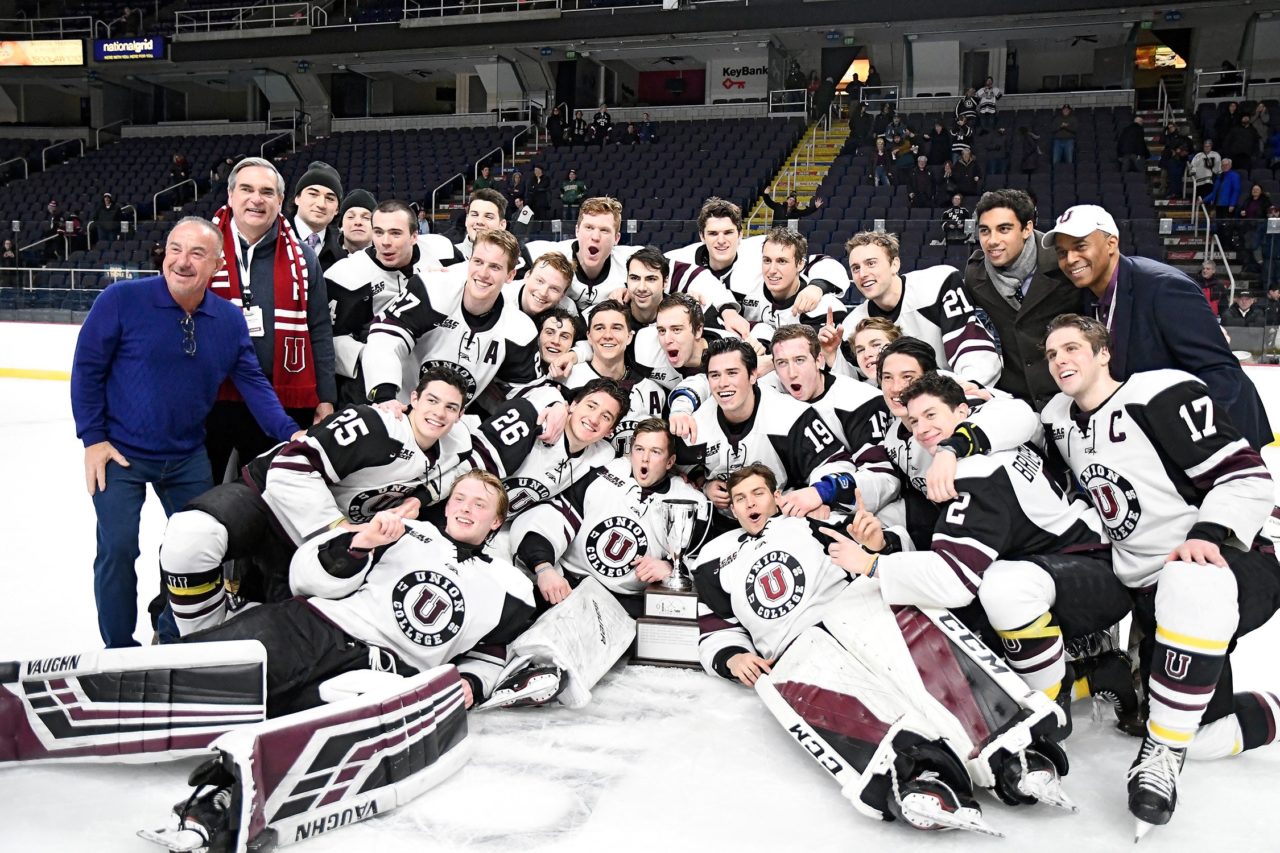 Albany, NY — New York’s Capital region has a decorated college hockey history. Union College and the Rensselaer Polytechnic Institute of Technology have combined for three National Championships and the area has also hosted three Frozen Fours. The Dutchmen and Engineers share one of the fiercest rivalries in the ECAC and were scheduled to face off in the seventh Annual Capital District Mayor’s Cup on January 19th, but snow postponed the game to Tuesday night. The teams met with a smaller crowd at the Times Union Center in Downtown Albany than hoped for, thanks to additional snow and the postponement, but staged a physical addition to their rivalry nonetheless.

Union entirely dominated the opening frame, with a 12-5 shot counter and complete dictation of pace and play. RPI matched the physicality of the game but mostly leaned on freshman goaltender Owen Savory to survive into the first intermission goal-less.

Savory and Union goaltender Darion Hanson were dazzling in the second, saving their teams on a number of clean breaks and looks. Savory was helped by a fortunate post following a Cole Maier shot but was perfect on the other seven shots he faced. Hanson was equally impressive stopping 12 shots, and keeping the game scoreless after an RPI push.

Union cranked up the offense in the third, outshooting RPI 22-2 for among the most lopsided frames in the college hockey season. Savory held firm under pressure for the entire frame and forced the game to overtime. Union again outshot RPI 2-1 in the extra session, but neither Hanson nor Savory cracked. Savory recorded his first collegiate shutout and Hanson notched his first shutout of the season and second of his career. “When you get that many shots on you, it’s just about trying to get something on it. My hands, my helmet, anything to keep it out” observed Savory.

However, there was a trophy to award, so the teams staged a five-round shootout. That ended even at 2-2, so an additional round was added. Cole Maier took his turn and the captain ripped it home for a lead. Darion Hanson stonewalled Jakub Lacka and sealed the fifth Mayor’s Cup win for the Dutchmen.

“It was a pretty cool experience” noted Cole Maier, who also scored the overtime winner in the 2017 Mayor’s Cup. “Just such a battle the entire 65. So hard to score. The trophy is always a goal for us.”

RPI moves to 7-17-1 on the season with their first tie. They’ll host Colgate on Friday night and Cornell on Saturday night. Puck drops at 7 pm both nights at Houston Fieldhouse. Goalie saves, RPI’s Savory made 43 saves. On the other end of the ice, Union’s Hanson made 20 saves.

Union moves to 12-7-5.  They’ll also play at home against the western-most ECAC teams. Cornell visits Messa Rink on Friday night, and Colgate visits on Saturday night. Puck drop is at 7 pm both nights.